Under Pressure
(Love and Football, Book 1)
by Lauren Ashley

Rookie quarterback, Drew Carmichael, is under pressure like never before.

When Drew abruptly and unexpectedly comes out of the closet, his life is upended. The media is hounding him. Fans and haters are scrutinizing him nonstop. Worst of all, team management is wary of him, unsure if he’s worth all the hassle.

He’ll do anything to stay on his homestate’s NFL team, including pretending to be in a serious and committed relationship. The only problem is his fake boyfriend is Scott Hunter-the irresistible pop-country music star and his secret teenage crush.

Scott Hunter is used to being under pressure. He’s dealt with it his whole life, handling it all with grace and an unwavering smile on his face.

When his manager presents him with the long-awaited opportunity to come out of the closet, he jumps on it, no questions asked. Pretending to be Drew Carmichael’s boyfriend should be easy. Simple. Fun.

He never expected or wanted to start caring about the golden boy of football. That’s definitely not part of the plan. Neither is fooling around with him on a football field… 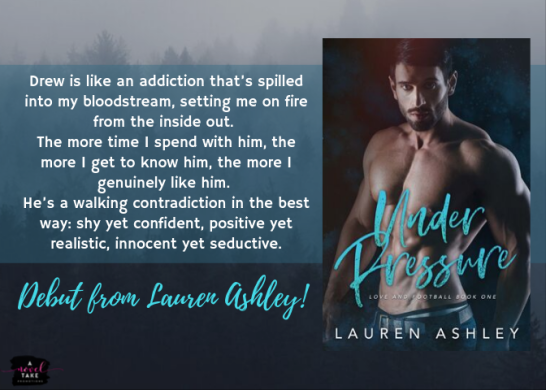 I’m going to kill Cara and Caitlin, my little twin sisters, for roping me into this mess.

Volunteer for the Boy Toy Charity Date Auction, they said. It’ll be fun, they said. A night of no-strings-attached fun, they said. You know what they conveniently didn’t say? That there was a very real possibility that my long-term stalker could outbid everyone and buy me for the fucking night.

Despite my brash and menacing persona as a football player, I’m a pretty chill guy. As a middle child with three older brothers and three little sisters, being chill is practically an unwritten rule, necessary for survival.

Point is, I can deal with a lot.

Slathering my biceps and bare chest with oil? Sure, no problem. Letting myself be ogled like a piece of meat? Go right ahead, I have nothing to be ashamed of. I know I’m what most people consider to be a good-looking guy. But having to spend the night with Mary Alice Carter, having to wine and dine her? I’m not sure I can deal with that.

This is the last time I agree to do the twins a favor. But even as the words cross my mind, I know it’s a big fat lie. I might put up more of a resistance next time around, but I’ll still end up caving. All they have to do is set their puppy dog eyes on me. The twins and Hayley, the baby of our boisterous family, have my brothers and I wrapped around their little fingers.

The easy, charming, well-rehearsed smile on my face doesn’t falter one bit. Internally, however, I’m screaming.

I’ve known Mary Alice my whole life. She was the girl next door. Literally. Not only were our families neighbors, but we also grew up in the same circles, each born into powerful family dynasties. Hers in the entertainment industry, mine in politics and football. From what I can remember and from what I’ve seen on old home videos, she wasn’t so bad when we were little. There was a brief period of time when we were actually best friends. Sandbox partners in crime. It wasn’t until she got it in her head that we were “destined to be together and become a power couple” that things between us started going downhill.

Over the years, she’s pulled a lot of stunts. She’s repeatedly tried to squeeze her way into my friend groups, she practically harassed me all throughout high school, she followed me to college, and she even managed to hack into my Facebook account and change my relationship status to “In a Relationship with Mary Alice Carter.”

I’ve tried just about every way to let her down. Well, every way except for one. The truth.

“Going once…twice for ten thousand dollars.” Cara, who’s acting as the event’s auctioneer, pauses to scan the crowd. She’s well aware that this is my worst nightmare come true, although she doesn’t quite understand why. Nobody really, truly does.

“Eleven thousand!” another girl yells out from the crowd, giving me some glimmer of hope.

“Fifteen thousand!” Mary Alice immediately counters, clearly not willing to go down without a fight. One thing about her that’s never changed throughout the years is her determination. Once she sets her mind to something, there’s absolutely no stopping her.

Panic blooms in my chest. I shut my eyes, trying to tell myself that this isn’t the end of the world. I’ve dealt with a hell of a lot worse in my life. One night with Mary Alice isn’t going to kill me. But the panic only spreads, climbing up my throat, thick and powerful. It robs me of any ability to think clearly and rationally.

When I open my eyes, Cara is standing in front of me. Her clear blue eyes, same as my own, same as our mother’s, are filled with concern.

“DJ, are you okay?” she asks in a hushed whisper. The use of her childhood nickname for me brings a fleeting small smile to my face. It’s the first genuine one I’ve had all night.

“I can’t do this anymore,” I hear myself saying in a faraway voice.

“Can’t do what anymore?” Cara asks, a frown marring her face.

I’m not even sure I myself know the answer to that question. All I know is that I feel like I’m suffocating. It feels like there’s a thousand-pound duffle bag of bricks resting on my shoulders, weighing me down. There’s a growing ache in my chest, a hollow emptiness that’s draining any and all ability to be happy.

I’m so tired of hiding, lying by omission, and trying to live up to everyone’s expectations of me.

That’s apparently all it takes to feel like the goddamn weight of the world has been lifted off my shoulders.

The secret that I’ve been living with for nearly a decade has just been broadcasted to far more people that I ever expected or wanted.

“Did the Texas Bravehearts know you were gay before they selected you as number one overall in the NFL draft?”

“How do your teammates feel about this?”

I completely forgot about the fact that a select group of reporters are here tonight. I’d agreed, at my agent’s insistence, to an informal interview. It was supposed to be a fluff piece.

How long have you been writing?
LA: I’ve been writing and brainstorming story ideas since elementary school!

How do you handle writer’s block?
LA: Writer’s block is something that I still struggle with. I try not to let it discourage me and remind myself that even the best, most successful authors get writer’s block.

What are the tools of the trade?
LA: WiFi/Internet, Vellum (lifesaver!), pen and paper, iPhone notes section

What is the future for the characters? Will there be a sequel?
LA: Under Pressure is the first book in a trilogy. While the second book will feature a different couple, Drew and Scott will definitely make appearances!

If your book was to be made into a movie, who are the celebrities that would star in it?
LA: Drew – Tyler Hoechlin, Scott – Garrett Hedlund

How many plot ideas are just waiting to be written? Can you tell us about one?
LA: Way too many to count! I don’t have much of a plot worked out yet, but it involves bodyguards and politicians.

Five fun facts about you.
LA:

What is your social media poison of choice?
LA: Without a doubt Instagram! Such a great source of inspiration for pretty much all things (writing, photography, fashion, travel, etc.)

Lauren Ashley discovered her love for books at an early age. She is a hopeless romantic at heart and believes that everyone deserves their happily ever after. An East Coast native hailing from the Tri-State area, Lauren hates the cold weather, but loves her chunky sweaters and cups of coffee. When she’s not writing, she can be found traveling, binge-watching TV, spending time with loved ones, and obsessing over all things Harry Potter.