Hello, book friends! It’s the very best day because today we are revealing the cover and blurb for a brand new J.R. Gray book, a celebrity romance!

Get ready for UNSCRIPTED… 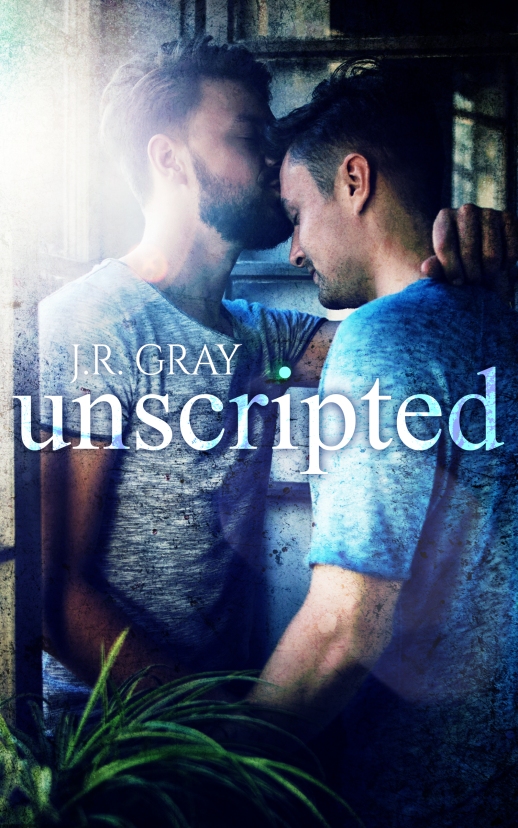 Quellcrist King has been playing a part his entire life. The more famous he becomes, the more he hides. The only person he ever let see the real him rose with him from nothing to the very top.

They were the king and queen of Hollywood— and then she wanted a divorce. The only way to survive his depression is to bury himself in work. If he can be a character, maybe he won’t have to remember himself. A gay role can’t be any different than playing a straight one, can it?

But instead of finding solace in the character, he finds it in his costar. Hale becomes his best friend, his lifeline, the light in his darkness. Quell is forced to examine everything he thought he knew about himself while filming intimate scenes with Hale that feel more real than anything ever has before.

He’s lived his entire life following the script. What would life be like unscripted? 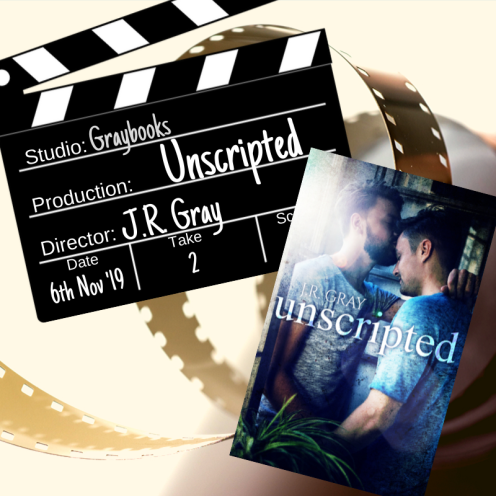 “You’re serious about this?” Mel sat with the television script in front of him at my rented Malibu house. He’d flown in from a project he’d been working on in Vancouver because I’d begged him to.

I knew he’d read it. He’d probably read the first draft the minute it landed in his in box. He was one of those people who couldn’t leave any alerts on his phone.

“I’m serious. I paid cash for the rights,” I said.

Mel slowly blinked. “You actors have too much cash and not enough sense. Who are you going to sell this to?”

“You don’t think with both our names attached I’ll be able to sell it?” I knew if I got him on board, I’d be able to make the project happen.

“It’s gay. And not ‘dip your toe in the gay waters and queer bait the fans’, this is like ‘in your face with a big gay dick’ gay. I should know.” Mel was perfect for this. A queer director for a queer project was something  I wholly believed in. I had to sell him on it.

“So are you, which is why I want you to be the other show runner with me.” I grinned. “I know you’ll do it right. The queer people will know you won’t bait them.”

He rolled his eyes. “Honey, you want me to make space in my schedule to do something you’re not even sure if you can sell?”

“With both our names attached, it will sell,” I said, sure he was going to do it already.

Mel scowled but he had to know I was right. “You remember you’re straight, right? Who are you going to play? There is no fucking way you’re going to be a bisexual pirate.”

“No, I’m going to be the gay prince.” I grinned because I knew he wasn’t expecting it.

“Flint.” Mel threw his head back and shook it as he spun in a slow circle in his office chair. “I googled the book on the way here after I read the script.”

“There is explicit gay sex in it.” Mel pointed out like I hadn’t read the books.

“And?” What he didn’t know is I’d been reading the books for three years and I couldn’t stop. I couldn’t get them out of my mind. They were top of the New York Times Bestseller List and the latest had debuted at number one. That’s when I knew I had to buy the project and now.

“Who the fuck are you going to sell it to? We can’t do this shit on a network.” Mel was pointing out all the things I’d already gone over in my head.

“Good thing streaming services are all the rage. We’ll have our pick.” I was way ahead of him. He just didn’t know it yet.

He righted himself planting both feet on the ground. “Can you afford to fund a pilot? There’s a reason people like us don’t produce this stuff. Because it’s a massive investment without a promise of return. Think about it, Quell. You’re comfortable. You have a nice house. How many millions are you going to sink into this with the risk of it not selling?”

“I’m not selling a pilot. I already have meetings lined up with all the big streamers. I’m selling the season outright. The book has a track record. And with our names I’m going to sell the whole first season, maybe two.”

“The balls on you. Are they golden, Q? Are they like the size of grapefruits?” He held up his hands like he was holding a small melon.

“Fuck no because then you’ll do it and rub it in my face for the next fifty years.” He scrubbed a hand over his face. “Who are you going to get as writers?”

I stood to get us both drinks, setting the aged whiskey on the table in front of him. I held up my glass and he picked his up. “To making magic and gay ass pirates.”

He clinked his glass with mine. “I didn’t say I was in yet.”

“You didn’t have to.” I sipped the whiskey, welcoming the burn in my throat.

I needed the distraction, a project to pour all my time into. My life was in shambles, but I wasn’t about to tell him that. If he thought I was doing this for anything other than love for the project, he wouldn’t do it. And I did love it. I’d been obsessed with the books from the first pages. I wanted to lose myself in this world to forget my reality and I had the ability to make it a reality for a little while.

“Are you really going to be able to shoot the sex? You’re straight.”

“You’ve said that. How many times have you seen me film straight sex scenes with someone I wasn’t attracted to?”

“Onion breath was bad. She used to come stand behind me.”

I shuddered. “Michael Bay always picks the weirdest people to be obsessed with.”

“No shit.” He set his glass in front of himself and spun it in place. “Is Rachael okay with you doing this?”

It didn’t matter what Rachael was okay with anymore, but I wasn’t allowed to tell him that. We were going to pretend to be happy until her next movie was out. Because happy Hollywood couples sold movies.

“She told me to do what makes me happy.” Which was more like a fuck off when she’d said it, but it still amounted to the same thing.

“You giving her a part on it?”

“No, she’s booked solid.” Or so I was going to tell people.

“What? She always comes with you to shoots.” He tilted his head and stared at me.

“I know.” I faked a smile. Sometimes being an actor saved my life. “But we can’t work it out. It will be fine. I’ll have way more to do with this project being the show runner.”

“No shit. I don’t think you know what you’re getting yourself into.”

I did know and I needed it. I needed to not be in my head for a little while because I couldn’t sit home another day watching my life falling apart around me and not lose it.

“Do you realize I’m going to enjoy every minute of you awkwardly having to make gay sex convincing?”

“You’re going to have to give me all the pointers then.”

“I could show you.” He wagged his brows at me.

And we both cringed then laughed.

“Can you imagine?” I asked.

“It would be like fucking my brother. No thanks. But that won’t stop me from staring at your ass.”

“Like you haven’t seen it.” I scoffed. “And my balls when we were filming in New Zealand and we had that wardrobe thing.”

He slapped his thigh and whiskey came out of his nose. “Fuck me. I’d forgotten about that. Who the fuck is going to let the two of us loose in charge?”

I slid papers over the table.

He picked them up. “I’ll have my lawyer go over them and send them back.”

“Better do it quick. I have meetings Monday to sell it.”

Mel’s mouth dropped open. Exactly what I’d been hoping he’d do. “You dog.”

“And when I say you’ve joined on, it will make the deal what much sweeter.”

“How far is this along?”

“You know I wouldn’t do anything I didn’t think was a good idea.” He crossed his arms over his chest and I was worried I’d offended him.

“I know but still. I wanted to sell you on it.”

He nodded. “I guess I’m extending through Monday.”

A grin spread across my face. “Can you afford to?”

“My assistant director can do what needs to be done for the weekend. Most everyone is off anyway.”

“Good. It will be better to have you there.” It was all coming together.

“Where’s Rachael?” Mel glanced around my office like he hadn’t noticed she wasn’t in the house before.

“Filming. They needed to fix a scene they found an issue with in post-production.”

“You didn’t go with her?” I felt like my excuses were Swiss cheese and if Mel saw through me already, maybe everyone else would too.

“Do you really have the time in your schedule to go right into this?”

“Yeah, Rachael and I talked about it. She starts her new movie and I didn’t want to let this go. It’s all about timing. She’ll be finishing up by the time we go to film and she can come up to Vancouver when she’s done.” 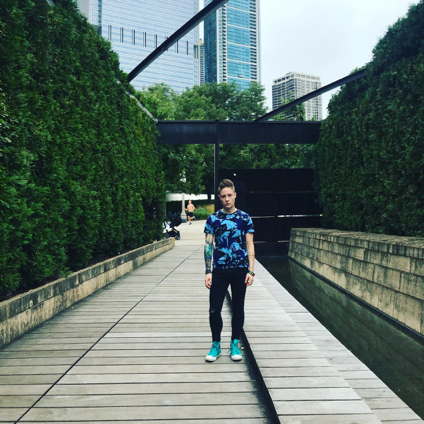 About J.R. Gray:Gray is a cynical Chicago native, who drinks coffee all day, barely sleeps, and is a little too fashion obsessed. He writes realistic and damaged characters because everyone deserves a happily ever after.

Hosted with A Novel Take Promotions