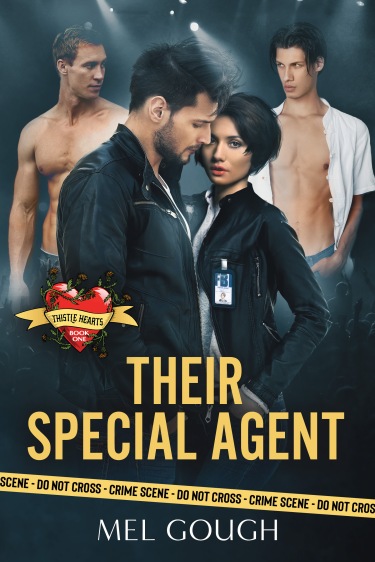 A murder. Three gorgeous men. One choice – Do your job, or follow your heart?

On the eve of the Thistle Hearts reunion tour, the rock band’s manager is found murdered. When Special Agent Carrie McDonald arrives to assist with the investigation, the band has mixed emotions about the involvement of the FBI. Jay, Lou and Corey have everything riding on a successful comeback, and their manager’s violent death has thrown them into turmoil. The last thing they need is the wrong kind of press.

As Carrie delves into the case, the band’s complex history of desire and tragedy emerges. Their shared passion intrigues and excites her, and gradually, the men open up and draw her into their ménage.

But a killer is on the loose, and he’s not yet done with Thistle Hearts.

Can Carrie prevent another brutal crime and protect the men who offer her a future beyond her wildest dreams?

There is so much to this story!! Murder, steam, chemistry and a little thrill.

I was gripped from the start and needed to know what happened next. I love a good mystery and I liked that my every perception/expectation was mostly challenged. I still need to know why the person did what they did, so I’m really hoping that will be explained in the next book, but Mel’s got me hooked.

I found the romance elements surprisingly organic. All the characters slept with each other, each had their own connections and were very open in their ideals of a relationship and I liked that it felt like a world were polyamory was mostly a norm, no questions asked. I liked this and found it freeing to read. I very much look forward to Jay & Lou, Jay & Connor, Connor, Lou & Jay – any sexy times between any of these sexy men would be hot and Mel liked to tease us with hints to the hotness of what these guys could get up to, but (sadly) not much happens on-page between the men it’s more about their connection and desire for Carrie.

I liked Carrie. I felt she was strong, confident and relatable and while her storyline had predictable moments I really liked her approach to the band and her connection to each of the men was different. She was more than the no-nonsense FBI agent and while predictable I liked that she saw the case to its end.

There a quite a few things that were left unanswered and there were a few odd additions/characters/comments throughout the book but I’m invested and need more in this series and need my questions answered! A good overall story that’s mostly resolved, but leaves you with a few lingering questions to keep you hooked for the next installment, well done Mel!

The rain came down in sheets. Special Agent Carrie McDonald wiped her face on the sleeve of her black windbreaker. No use. Everything was soaked.

Special Agent Susan White joined Carrie at her lookout post by the cordoned-off stretch of highway. “Thank god that’s someone else’s mess to clean up.” She squinted at Special Agent Cortez talking to a Travis County Sheriff’s Deputy next to an SUV in the ditch with its wheels still slowly revolving in the air. He looked like a swarthy, drowned rat. Carrie felt sorry for him.

The San Antonio field office would take the rap for this clusterfuck. She tried not to feel relieved about that.

The scene on this stretch of highway was straight out of the latest installment of The Fast and the Furious. A pick-up and a black sedan lay upside down across the lanes, flattened and still smoking. The railings that SUV had crashed through were mangled shards of metal. A fourth vehicle lay out of sight in a deep ravine, curls of smoke marking its resting place. Everything was illuminated sideways by the setting sun. The ambulances were long gone, but the coroner’s van still idled nearby.

Three dead drug mules. Two civilians, on the way home from a choir recital, also dead. And three seriously injured Austin PD detectives made it a calamity beyond the usual drug bust.

Would they ever work out exactly what had gone wrong? Right now, the narrative was confused and short on detail. As far as the forensics team had worked out, one of the unmarked law enforcement vehicles had been en route to head off the suspects fleeing hell over leather from the sting op gone south in downtown Austin. That had been where Carrie and Susan had been detailed to cover one of the routes out of the city. The sedan, carrying two agents from the FBI’s San Antonio field office, was in hot pursuit. Poor visibility, a narrow stretch of road of hairpin bends and a car full of stressed-out perps under the influence had made for an explosive combination. The drug traffickers’ car had swerved on the opposite lane to overtake the SUV carrying a mother and teenage daughter just before another narrow curve. They’d met a car with three Austin detectives racing to aid the operation head on, and the world had exploded in screeching metal and glass.

Carrie gave a sigh. She nudged her partner. “Come on. Cortez says to call it a day.” It wasn’t like them getting soaked here made the slightest bit of difference. The hillside swarmed with LEOs from Austin PD, the Travis County Sheriff’s Department and the San Antonio field office. Two Criminal Investigation agents on loan from Baltimore were of scant use in the clean-up.

Susan nodded as Cortez’s angry voice carried up to them. “Let’s get out of here.”

Their rental sedan sat thirty yards back from the cordoned-off scene, and Susan pointed the keys at it. The lights flashed and the doors clicked open. Even in the middle of a crisis, she’d never leave a car unlocked that contained weapons and ammunition. Behind her back, Susan was sometimes called Agent Lily White. Carrie appreciated her partner’s uprightness. It was one reason they got on so well and she chose to work more with her than any other agent.

Thinking of Susan’s nickname made Carrie smile, but when she slid into the passenger seat and her gaze took in the carnage on the highway, the smile quickly faded.

“Yeah.” Carrie sighed. She reached into the backseat where their luggage was stowed and dug in her carry-on for a towel. As she slid back into her seat, the wet windbreaker made a squelchy sound against the fake leather. She grimaced and wriggled out of the jacket, dropping the sodden thing in the foot space.

She quickly rubbed her short hair dry, then handed the towel to Susan, who took her time to undo the knot at the back of her head, wincing as the rubber band snagged on her long auburn tresses. She folded down the visor and tried to untangle the mess that the wind and rain had made of her do. Usually Carrie envied Susan her beautiful hair. Tonight, not so much.

She folded down her own screen and smoothed down the much shorter strands of her dark brown bob. She looked a fright, with chapped cheeks and a sodden collar. At least her hair would be as good as dry before they got back to the motel. “I hope they can give us our rooms back for one more night.”

“We were the only ones in that place for the last three days,” Susan pointed out from under the towel. “More likely they’ve gone bankrupt since we checked out. Maybe we should find somewhere else. Somewhere less—”

“Yeah.” She sighed. “Gibbs would flip his shit if we upgraded on the company dollar.” She chucked the towel in the back and started the car. “Back to the Bates Motel it is.” 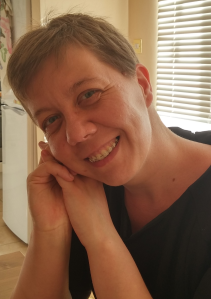 Mel Gough loves writing about love – but with a twist. Nominated for the 2019 Selfies Awards, her bisexual romantic suspense novel He is Mine is a typical Mel Gough story. She needs her HEA fix, but on the way there will be thorns and fire, and sometimes brimstone. All right, that might be over the top, especially since her stories are firmly based in the real world – though not always in the here and now.

Born in Germany, exploring other realities has been Mel’s siren call since she was young. Books opened up a plethora of worlds, and soon gave her a strong love of the English language. After an MA in Anthropology, field work in the middle of nowhere seemed like one adventure too far, so Mel settled in London, which, to misquote Dr. Johnson, she will never tire of.

Mel loves to bend genres – her romances are gritty and dark, and sometimes there’s a dead body. She’s been told that her prose is beautiful yet disturbingly real. She’s curious about bygone times, and hopes to speculate about the future in one of her next books. 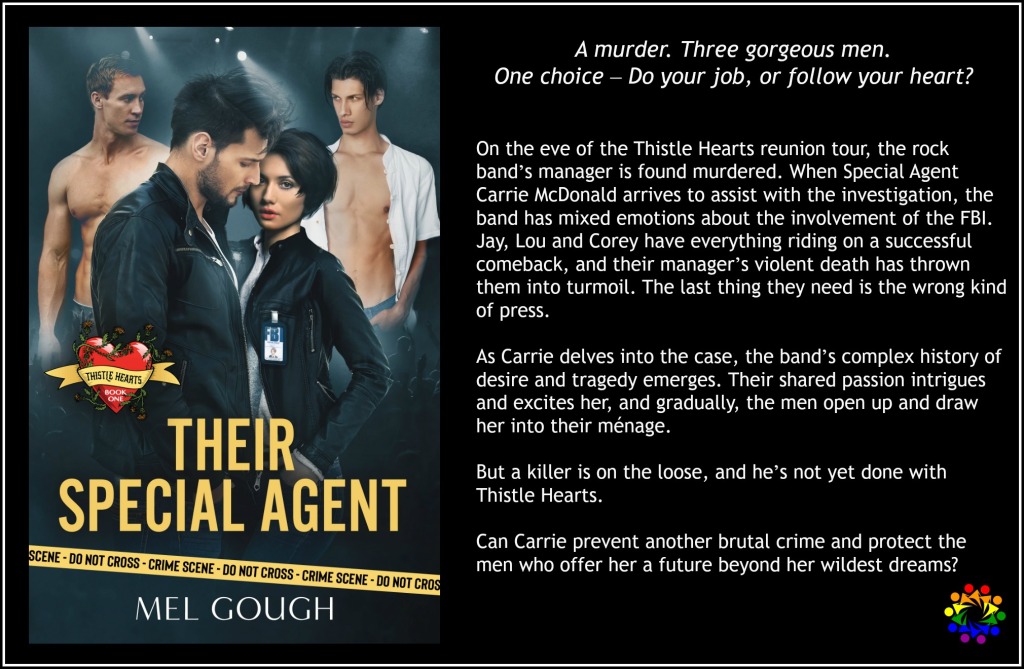 #QOTD Do you like thrillers?⁠
It's HERE (well in Australia anyway) 😉⁠
Who's ready for tomorrow!?!?!?!⁠
Happy Sunday everyone!⁠
#QOTD What's an author that gives you all the feels?⁠
Happy Friday (fellow Aussies) and Happy almost Friday for the rest of the world!!⁠
Loading Comments...
Comment
×
%d bloggers like this: