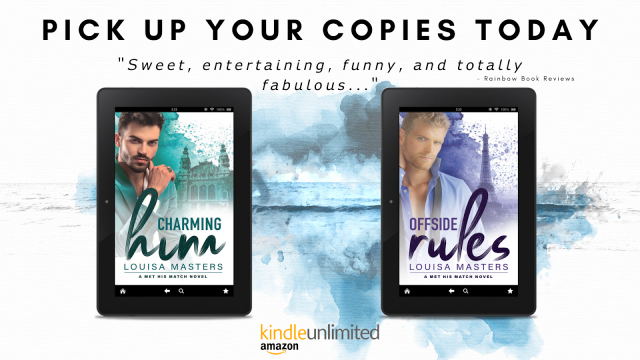 After getting off on the wrong foot—as happens when one accuses a stranger of being part of the Albanian mafia—their attraction blazes.

Léo, born to the top tier of society, has never known limits, and Ben, used to budgeting every cent, finds it difficult to adjust to not only Léo’s world, but also the changes wealth brings to his own life.

As they make allowances for each other’s foibles, Ben gradually appreciates the finer things, and Léo widens his perspective.

They both know one thing: this is not a typical holiday romance and they’re not ready to say goodbye.

It is like a fairy tale! I loved Ben! He such a great character! So cute, adorkable and humble.

Such a wonderful meet-cute when Ben meets his billionaire! Ben was awkwardly charming and Léo can’t help but been thorough enthralled. Ben is such a down to earth character and he can’t help but make Léo rethink all he’s ever known. A dream holiday turns into a dream romance with the picturesque backdrop of Europe.  This was a great piece of escapism with wonderful characters you can’t help but laugh with and fall in love with. I just love Ben!! I look forward to more of these guys in book two. Just a great read!!

Interesting take on an Australian accent with the narration but it’s okay. It’s a hard one to master LOL. Thankfully the narration of Ben flowed well with the other accents and didn’t sound too strange. Overall, good narration and it added to the “escapism feel” of the story.

Newly retired championship football player Simon Wood is taking on his next challenge. His plan for a charity to provide funding for underprivileged children to pursue football as a career has passed its first hurdle: he has backers and an executive consultant. Now it’s time to get the ball rolling.

Lucien Morel, heir to the multibillion-euro Morel Corporation, is shocked—and thrilled—to learn his father has volunteered him as consultant to a fledgling football charity. Better yet, the brains behind it all is heartthrob Simon Wood, his teenage idol and crush.

Although Simon and Lucien get off on the wrong foot, it’s not long before they’re getting along like a house on fire—sparks included.

But with the charity under public scrutiny, can their romance thrive?

Such an enjoyable read! I loved book one but I think this one was better! Falling for your childhood crush is such a sweet trope and I loved it!! A passionate and powerful couple that complement each other in every way. An adventure across countries to create a soccer based charity for underprivileged kids and a path to fall in love. I loved the story, the characters and the emotions. Louisa injected so much passion, care and love into this story I could feel it in every word. I felt for Si and Luc at every turn, every set back and every step forward. Just such a beautiful story!

So enjoyable! A fantastic group of characters and all the feels you could want! 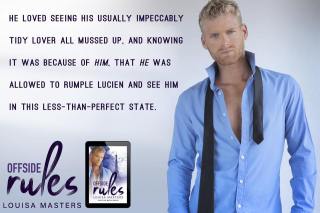 Charming Him
Ben leaped to his feet, nearly slamming into a passing hotel guest, and after profuse apologies hurried toward the lifts. Halfway there, he decided pretending to be late was just as lame as being eagerly early, so he changed direction abruptly and went over to one of the shops in the foyer, peering in the window and pretending to be fascinated by the display while he actually watched the reflection in the glass of the doors behind him. It took him a few minutes—and the glare of the saleswoman in the store—to realize he was “staring” at a women’s swimwear display. His face went hot and he took two quick steps back—
And collided with a warm body. A hard body. One that smelled so good.
Of course Léo would be witness to yet another embarrassing moment.
Ben slowly turned around and smiled weakly. “Hey.”
Léo’s amused smile melted his insides. Without the concern about his identity or the buffer of alcohol, lust hit hard and sharply. Today, the demigod was wearing an outfit similar to his own, only his shirt was red, a color that did amazing things for Léo’s dark skin and eyes. Ben’s cock jerked in his too-tight trousers, trying to sit up and beg.
“Good afternoon,” Léo said, and Christ, how had Ben not noticed how amazing his voice was? It was like coconut rough, if coconut rough were a voice, or voices could be chocolate. It vibrated through every cell in Ben’s body, the warm, deep timbre stroking over—
“Ben?” From the questioning tone, it wasn’t the first time Léo had said his name. Ben hadn’t thought it was possible for his cheeks to get hotter, but it seemed he was wrong.
“Er, sorry. Um. Distracted. Remembering… stuff. That I need to do. But not right now!” he rushed to assure Léo. “Now I’m all yours. For lunch. I mean, to have lunch with.” He fell silent, wishing fervently that he had a time machine and could redo the last ten minutes. Sitting by the door eagerly was suddenly a much more sensible option.
“I’m glad you are all mine for lunch,” Léo murmured, with a hot look that couldn’t be misunderstood. Ben was sure his heart actually stopped beating.
“Ungh….”
“What would you like for lunch?” Léo asked. “Have you eaten here at the hotel yet? The main restaurant is only open for dinner, but the restaurant upstairs is decent. Or we could go to the club.”
“The club?” Ben asked blankly. Like a nightclub? That served lunch?
“The yacht club,” Léo told him. “They have a nice bistro there for casual meals.”
Ben’s eyes went wide. He’d never been to a yacht club—didn’t even know anyone who had a yacht, although maybe now he did—but his image of one was based on many movies, and he was sure it wasn’t a place he’d fit well. The “casual” hotel restaurant, on the other hand, he’d walked past several times, and it looked quite comfortable, even if he hadn’t wanted to spend that much on meals while he was here.
“Let’s eat here,” he said quickly. “I haven’t tried the restaurant yet, but I saw the menu and it looks good.”
Léo smiled in a way that made Ben’s stomach feel funny, and in short order they were at the mostly open-air restaurant on the roof level, greeted effusively by a man who seated them at what Ben was sure was the best table in the place, shaded yet with an uninterrupted view of the Mediterranean.
If he hadn’t been so stupidly nervous, Ben would have soaked it up.
The maître d’hôtel left them, replaced by an eager waiter who asked what they wanted to drink. Léo shot Ben a wicked glance, his lips curving, and Ben’s face went hot.
“Sparkling water,” Léo told the waiter. “Then perhaps wine later.” The man left, and Ben smiled gratefully at Léo.
“Thank you,” he said. “And thank you for being so good about last night. I know I made a bit of a fool of myself.”
“Not at all,” Léo said gallantly. “You were charming.”
Ben laughed outright. “I wouldn’t have called it that, but hey, your description sounds better than mine. Anyway, I drank too much of that incredible champagne, and you were really nice. So thanks.”
Léo’s expression was warm and approving. “I’m glad you enjoyed the champagne, and it was my pleasure to spend the evening with you. We would not be here now otherwise.”
Ben’s face went hot again, and he buried it in his menu. He felt awkward, even more than usual, and desperately wanted the loosening effects of alcohol. Maybe he should have ordered a drink, after all, but he didn’t want Léo to think he was a lush.
Come on, Ben. You don’t need alcohol to talk to the billionaire playboy son of a princess.

Facebook | Website | Twitter | BookBub
Louisa Masters started reading romance much earlier than her mother thought she should. While other teenagers were sneaking out of the house, Louisa was working out how to read romance novels without being discovered. As an adult, she feeds her addiction in every spare second, only occasionally tearing herself away to do things like answer the phone and pay bills. She lives in Melbourne, Australia, where she whines about the weather for most of the year while secretly admitting she’ll probably never move.
Find Louisa at www.louisamasters.com

Are you ready for a rivals romance?⁠
#QOTD Do or did you play sports?⁠
Unexpected sparks fly when a shy, straight, nerdy sweetheart meets a flirtatious, sexy, older Frenchman. Is Zio brave enough to take a chance on Armand? ⁠
#QOTD What's your favorite retelling?⁠
#QOTD What's a debut author you've read and loved recently?⁠
#QOTD What's your view on #CartoonCovers ?⁠
%d bloggers like this: