As the fiercest Defense Agent at the THIRDS, Destructive Delta’s Ash Keeler is foul-mouthed and foul-tempered. But his hard-lined approach always yields results, evident by his recent infiltration of the Coalition. Thanks to Ash’s skills and the help of his team, they finally put an end to the murdering extremist group for good, though not before Ash takes a bullet to save teammate Cael Maddock. As a result, Ash’s secrets start to surface, and he can no longer ignore what’s in his heart.

Cael Maddock is no stranger to heartache. As a Recon Agent for Destructive Delta, he has successfully maneuvered through the urban jungle that is New York City, picking up his own scars along the way. Yet nothing he’s ever faced has been more of a challenge than the heart of Ash Keeler, his supposedly straight teammate. Being in love isn’t the only danger he and Ash face as wounds reopen and new secrets emerge, forcing them to question old loyalties.

Yes! We finally get Ash and Cael’s story and it’s all I wanted and more!!!

We still get more if the Team and Dex and Brody of course but this is Ash’s story and we’re given more insight into his past and guilt that’s kept him from Cael for so long. Cael never really gave up hope and as danger threatens their time and Cael’s life, we see Ash’s true power and love for Cael in spite of it all.

Another thrilling story, with heat and danger and still includes some patented Dex moments!!! Totally awesome addition to the series!

Calvin Summers and Ethan Hobbs have been best friends since childhood, but somewhere along the line, their friendship evolved into something more. With the Therian Youth Center bombing, Calvin realizes just how short life can be and no longer keeps his feelings for his best friend a secret. Unfortunately, change is difficult for Ethan; most days he does well to deal with his selective mutism and social anxiety. Calvin’s confession adds a new struggle for Ethan, one he fears might cost him the friendship that’s been his whole world for as long as he can remember.

As partners and Defense Agents at the THIRDS, being on Destructive Delta is tough at the best of times, but between call-outs and life-threatening situations, Calvin and Ethan not only face traversing the challenges of their job, but also working toward a future as more than friends. 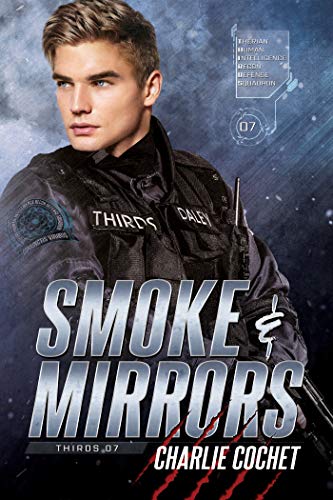 Life for Dexter J. Daley has never been easy, but he’s always found a way to pick himself back up with a smile on his face. Taken from his home, and the arms of his boyfriend and THIRDS partner, Sloane Brodie, Dex finds himself in a situation as mysterious and lethal as the Therian interrogating him. Dex learns what he’s secretly believed all along: his parents’ death wasn’t an accident.

Discovering the whole truth about John and Gina Daley’s homicide sets off a series of events that will change Dex and Sloane’s lives forever. As buried secrets rise to the surface and new truths are revealed, Dex and Sloane’s love for each other is put to the test, with more than their relationship on the line. If traversing the waters of murder and secret government agencies wasn’t enough, something inexplicable has been happening to Dex—and nothing will ever be the same.

In a matter of days, Dex has been kidnapped, tortured, killed, revived, become half-Therian, offered the chance to become a spy, and accepted a proposal to marry his jaguar Therian boyfriend, Sloane Brodie. It’s been a lot to take in, and although Dex is still trying to wrap his head around everything that’s happened, he knows he has to move forward. After the events of Smoke & Mirrors, Dex and Sloane find themselves in one of the most frightening situations of all: revealing the truth to their Destructive Delta family. When the dust settles, nothing will ever be the same, and it’s up to Dex to prove that in the face of change, the one thing that will always remain the same is family.

Check out Dex & Sloane’s Story & the start of this awesome series, HERE!! 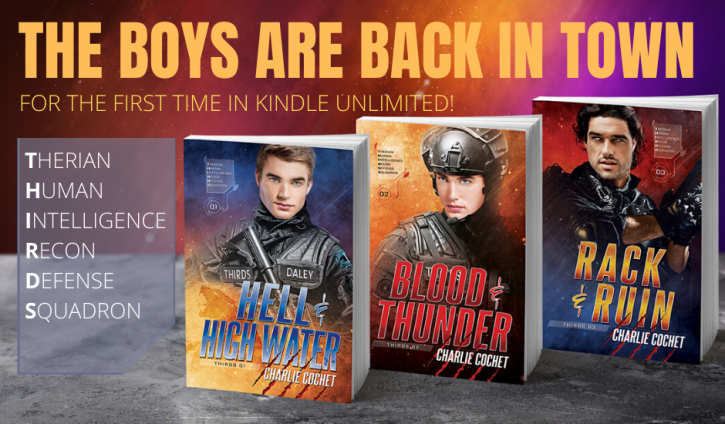 About the Author:
Charlie Cochet is the international bestselling author of the THIRDS series. Born in Cuba and raised in the US, Charlie enjoys the best of both worlds, from her daily Cuban latte to her passion for classic rock.

Currently residing in Central Florida, Charlie is at the beck and call of a rascally Doxiepoo bent on world domination. When she isn’t writing, she can usually be found devouring a book, releasing her creativity through art, or binge watching a new TV series. She runs on coffee, thrives on music, and loves to hear from readers.