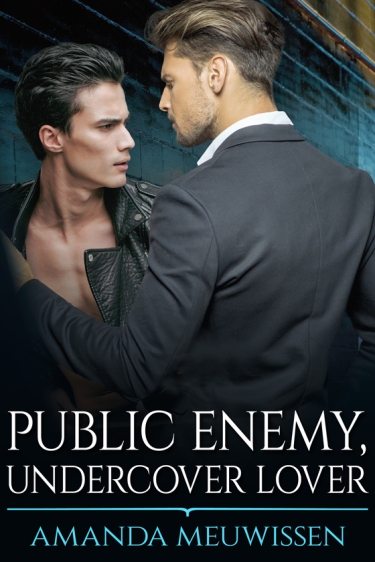 Isaac Ford seeks help from the detective who put him in prison — now security consultant, Andrew Wen — after an unexpected prison break weeks before his release. Despite an almost twenty-year age difference and being on opposite ends of the law, the attraction between them culminates in a one-night stand that teeters Isaac between turning himself in and returning to a life of crime. His decision is made for him when he discovers a young man waiting for him at his safe house — the son he never knew existed.

Months later, Isaac has been reconnecting with his son, Dalton, and started a security consultancy of his own, looking for a fresh start. His past catches up to him, however, when he runs into Andrew at the police station, both seeking information on a new thief. Andrew isn’t happy Isaac left that night or that he’s been encroaching on his business, but the passion between them rekindles as trying to one-up each other turns sexual. Neither plan to let anything more come of their tryst until Andrew finds out about Dalton, who he knew in college, and a theft at Dalton’s job forces Isaac and Andrew to work together.

The warmth that spread through Isaac’s chest surprised him, but he didn’t have much time before Dalton would be back, and Andrew discovering he had a son was just as bad as any enemies.

Then a bitter thought crossed his mind. “Did you track me again?”

That might be true. This was closer to the persona Isaac remembered from when Andrew was a detective. Sympathetic, earnest, almost sweet. It was just as well that he’d found his way off the force.

He looked like he had half a mind to take the empty seat in front of Isaac but hesitated with a bite at his lip. “I know we’re still at odds professionally, and I’m sure you’ll infuriate me to no end trying to steal more jobs from me in the future, but … I never actually apologized for Christmas.”

“I get why you left,” he pushed on. “I wasn’t exactly hospitable, and you still kept your end of the bargain. You’ve been a model citizen ever since. You know, besides shameless shenanigans in uniform and invasion of privacy,” he whispered. “But I won’t talk if you don’t.”

The smile that alighted Isaac’s face in response surprised him too. He tried to think of a comeback, only for Andrew’s eyes to fall to the empty seat again and notice the second drinking glass.

“If it was one of your associates, you wouldn’t care, but you’re anxious. Stealing more clients from me already? Or maybe you are planning a job, and you just use security as a front.”

He was teasing again, Isaac could tell, but that’s what all the naysayers said: that Isaac was faking it. Once word of the new thief finally spread, they’d all say it was him. A few skirts of the law were one thing, but he couldn’t risk going back to jail, not when he had Dalton.

Dalton — who was out of the bathroom and headed for their table!

Andrew spun around when Dalton called his name.

When Dalton called his name.

They hugged, completely unabashed in their open display of affection.

“Why are you never on Facebook?” Dalton squeezed Andrew tightly. “I can hardly keep up. Did I hear you quit the force?”

“Almost a year ago now. I started a security firm.”

“That’s awesome! And kind of funny. My dad does security too. Dad? What’s with the face?”

Dalton’s eyes landed on Isaac, and when Andrew turned to see that no, there was no other man in line of sight to be the bearer of that endearment, his jaw nearly hit the floor.

“Do you and Andrew know each other?”

“How do you know each other?” Isaac threw back, because if they’d slept together, he would have an aneurism right there in the café.

“Andrew tutored me in Art History in college. How do you know him?”

He was my nemesis.

He’s the detective who put me in jail.

We fucked on his living room sofa half an hour before I met you, and I helped him through two orgasms yesterday.

“We … dated,” Isaac sputtered — and what the hell was he thinking?! “Briefly.”

‘WHAT?’ Andrew mouthed in disbelief, but he must not have been able to think of a better answer either, because he screwed his face into embarrassed shock for Dalton’s sake and said, “Yeah! Very briefly. Boy, that must sound super weird since he’s your dad.”

“Not … weird,” Dalton said, glancing stoically between them. He had Isaac’s knack for hiding his emotions unless he wanted others to know them. “I mean, we’re all adults. You’re a good guy, Andrew, and Dad’s –”

“A criminal,” Andrew blurted, unable to keep his floundering word-vomit under control any better than Isaac had. “That’s why we broke up! Detective, thief … you know …”

“Conflict of interest,” Isaac saved him.

“Sure.” Dalton nodded as if that made perfect sense, which it did, but that didn’t alleviate any of the awkwardness.

Amanda Meuwissen is a bisexual and happily married 35-year-old geek. Primarily an M/M romance author with a focus on urban fantasy, she has a Bachelor of Arts in a personally designed Creative Writing major from St. Olaf College and is an avid consumer of fiction through film, prose, and video games. Amanda lives in Minneapolis, MN, with her husband, John, and their cat, Helga.

an ebook copy of my most recent Contemporary M/M Romance, Interpretive Hearts.