Audio Tour with Review! The Problem by Piper Scott

Laurence’s new lover is half his age. The problem? His relationship is about to make his life a lot more complicated…

Successful, sensible, and settled in his ways, single dad Laurence isn’t looking for love when he runs into the young man who sweeps him off his feet… and onto his knees. With an upcoming raise on the line and a son to care for, he can’t let an unconventional relationship jeopardize the future of his family. He’s a parent first and a lover second, and that’s the way it has to be.

The only thing Alex loves more than older men is being filthy with them. The problem? Sometimes, it backfires in the worst ways.

Up-and-coming painter Alex is broken in ways others can’t see, and he copes with the pain by drowning himself in experience—especially experienced men. But when he crosses paths with Laurence, he finds himself drawn down an avenue of life he’s sworn he’ll never visit again.

Men are meant to be disposable, and Laurence is only supposed to be a hookup… so why does Alex feel so safe whenever he’s around?

When a matter of concealed identity threatens Laurence and Alex’s bond, they have a choice—rise above the forces that seek to divide them and find happiness with each other, or let their problems grow too great to conquer.

The Problem is an 81,000 word contemporary omegaverse mpreg novel featuring a quirky group of single dads, the naughtiest lace panties you’ll ever read about, and the gradual development of a relationship between a Daddy and his boy.

I love Piper & Michael! A power duo. A wonderful story with a brilliant performance!

I loved this one. The perfect series opener and I love the ragtag single dad’s support group. (So many characters waiting to be revealed 😉)

As with most of Piper’s stories, they’re are filled with heart, humor, a bit of sass and a lot of wit. I felt this one had so many layers and depth to the characters! With an unplanned pregnancy (or 2) Lawrence is about to come back into the world of dating, life and love after his soul focus had been on his now teenaged son. Alex us a bold, fierce and confident Omega that turns Lawrence’s world upside down. So much happens in this story but you can’t help but fall in love with these characters (& their kids). I can’t wait for TeenDad2’s story, up next!!! Just so good!!!

Thanks for reading! For great stories, reviews, and more please visit https://blog.bookstattoosandtea.com/ 📚! 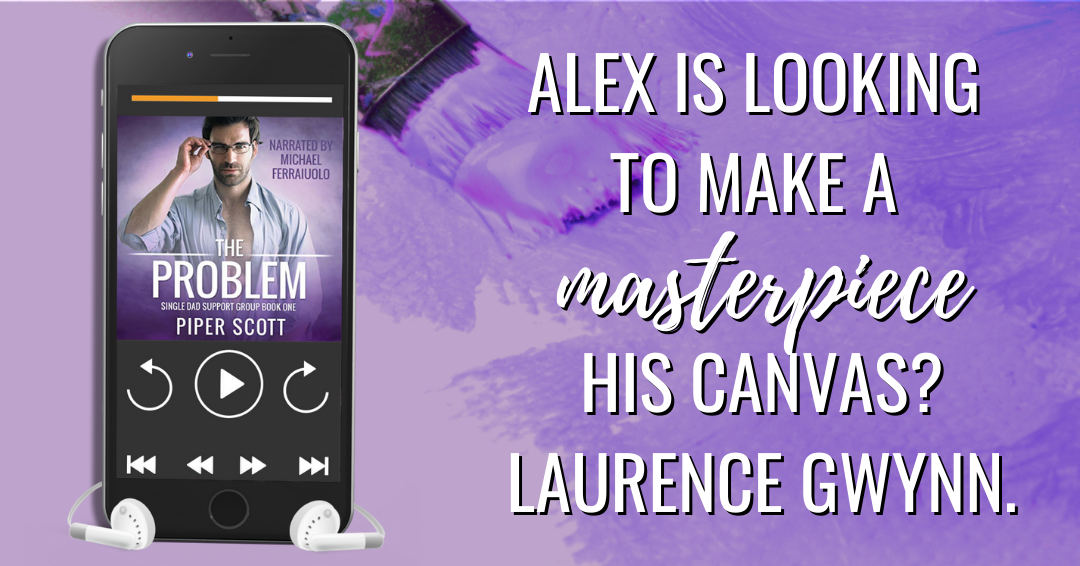 Delicate words traced Laurence’s neck like cursive over creamy paper. “To return to the topic of our previous conversation, I’d argue that science can be passion, just as art can be procedural. Before you interrupt, allow me to elaborate.” The playful, cunning quality of the whispered words painted a picture in Laurence’s mind. A charming smirk. A glint of mischief in beautiful blue eyes. The sharp, gorgeous features of a face, head quirked to the side. Full lips so close to Laurence’s neck, they were almost touching.

But where should was dangerous and unpredictable, almost was a temptation never realized. It went hand in hand with never. And while what remained of Laurence’s logical mind told him that he should side with the concept of never—especially when it came to the young omega who seemed to be doing his very best to seduce him—his heart told him that it had had enough.

“Take, for consideration, the art of sex,” the young man murmured. He came closer, his words hot on Laurence’s skin. A shiver shot down Laurence’s spine and stiffened his cock. How could words feel so good? “The process of procreation is science, isn’t it? The swapping of fluid, the introduction of gametes, the evolutionary drive of an omega’s heat, and the alpha’s instinctual reaction to the pheromones it produces…”

Laurence’s lungs were shriveled. He couldn’t fill them if he tried. Breath was a secondary consideration. All he wanted was to feel the young man in front of him.

To claim him. To make him his.

When he spoke, his words were hollow with effort and only carried as far as the young man’s ears. “So, you’d argue that sex is science?”

“No.” Another unseen smirk. The young man dipped his head down so his words ghosted across the hollow where Laurence’s shoulder met his neck. “Sex is science, but it’s also art. For every mechanical, utilitarian thrust, there is a breathtaking arch of a back, or a stretch of a long, beautiful neck… a breathy moan like music, or a shuddered gasp that’s prettier than any equation could be. Sex is everything. It’s the most beautiful thing in the world, because it shows that bridge between the mundane and the artistic. It embodies perfection. It flaunts duplicity and embraces it. And the most stunning thing about it? It’s so transparent in what it is. It is the ultimate triumph in science, and a masterpiece that inspires billions.”

Laurence’s tongue went rogue and allowed words he never should have spoken to be heard. “And so here you are at an art gallery…”

“Looking to make a masterpiece.”

Check Out Books 2 & 3 in the Single Dad Support Group Series!

After four years spent apart, Aaron is on his way home to marry the love of his life—his best friend. The proposal? It’s about to end in disaster.

Dedicated, determined, and head-over-heels in love, Aaron is ready to settle down with the man of his dreams—his best friend, Gage. With a prestigious degree under his belt, a promising career ahead of him, and a loving boyfriend to pamper and spoil for the rest of their lives, the future is brighter than it’s ever been.

The lie Gage has been living for the last four years is about to fall apart, and there’s only one way he can see himself holding it together. The proposal? It’s everything he’s ever wanted, but something he might never be able to have…

When the steamiest summer of Gage’s life leaves him pregnant with Aaron’s child, Gage knows what he has to do. He’s made Aaron a promise, and the future of their family depends on it.

Forced to keep his son a secret from everyone—even Aaron—Gage does whatever it takes in order to keep a roof over their heads. But when his child gets sick and Gage can’t afford medical treatment, he has a difficult choice to make.

How far will he go to keep his future family together?

When an unexpected reunion brings Aaron and Gage back together, they’re faced with a choice: overcome the obstacles standing in their way to becoming a happy family, or accept that the proposal they’ve both been dreaming of is never going to happen.

The Proposal is a 70,000 word contemporary omegaverse mpreg novel featuring a quirky group of single dads, a live stream you’re never going to forget, pretty pearls in naughty places, and a love that neither time nor distance can tear apart.

Vincent’s past threatens to overthrow his future. The solution? He’s about to find it in the storage closet at his friend’s wedding.

Independent, introverted, and eager to please, all single dad Vincent is expecting when he flies in to attend his friend’s wedding is a good time… not an irresistible older omega who slips into his heart as quickly as he slips into his bed. With a job relocation to the city on the horizon, a relationship isn’t off the table, but there’s a catch.

There’s something about Vincent’s past his prospective lover needs to know—something he’d rather leave behind.

Can he jeopardize his fresh start for a chance at love?

Alone his entire life, all Mal wants is to have a family. The solution? Take matters into his own hands…

Always a babysitter, never a dad, Mal has struggled with issues of self-worth his entire life, and at his age, he’s come to accept that he’s meant to be alone. Eager to have a family he can love, and who will love him back, he decides to pursue IVF and start a family on his own. But when his path intersects Vincent’s, he finds himself questioning whether love really is possible.

Mal is no stranger to the evil in men’s hearts. The only one he can trust is himself, isn’t it? But with kind and thoughtful Vincent, imagining a brighter future is a temptation that might prove too good to resist.

When life reunites their paths in unexpected ways after a sizzling one-night stand, Vincent and Mal are faced with a choice—let their forbidden connection keep them apart, or indulge in love and lust like they’ve never known it before.

The Solution is a 90,000 word contemporary omegaverse mpreg novel featuring a quirky group of single dads, fabulous revenge, an ice-cold shower that will leave you hot beneath the collar, and a unique take on Daddy kink perfect for two men who don’t quite fit the mold.

The next book in the Single Dad Support Group series is set to debut in August 2020, and the remaining two books are scheduled for production throughout the rest of the year and into 2021.

You won’t want to miss them.

Piper Scott debuted as a trio of authors looking to write together for fun. Their collaboration led to three novella-length books (Love Me, Save Me, and Keep Me,) before life sent them in different directions, leaving just one author with an omegaverse plot bunny that became the foundation of an intricate, interconnected world.

Left to her own devices, Piper writes scorching but heartfelt contemporary omegaverse romance about men you can’t help but fall in love with. Make sure to check out her contemporary gay romance alter-ego, Emma Alcott, for other great stories!

About the Narrator:
Michael Ferraiuolo is a graduate of Berklee College of Music and the owner of Iron Works Studios in New York City. As a voice artist, Michael has appeared both nationally and internationally in film, radio, and over 100 audiobooks.