It’s A Steal by Arden O’Keefe 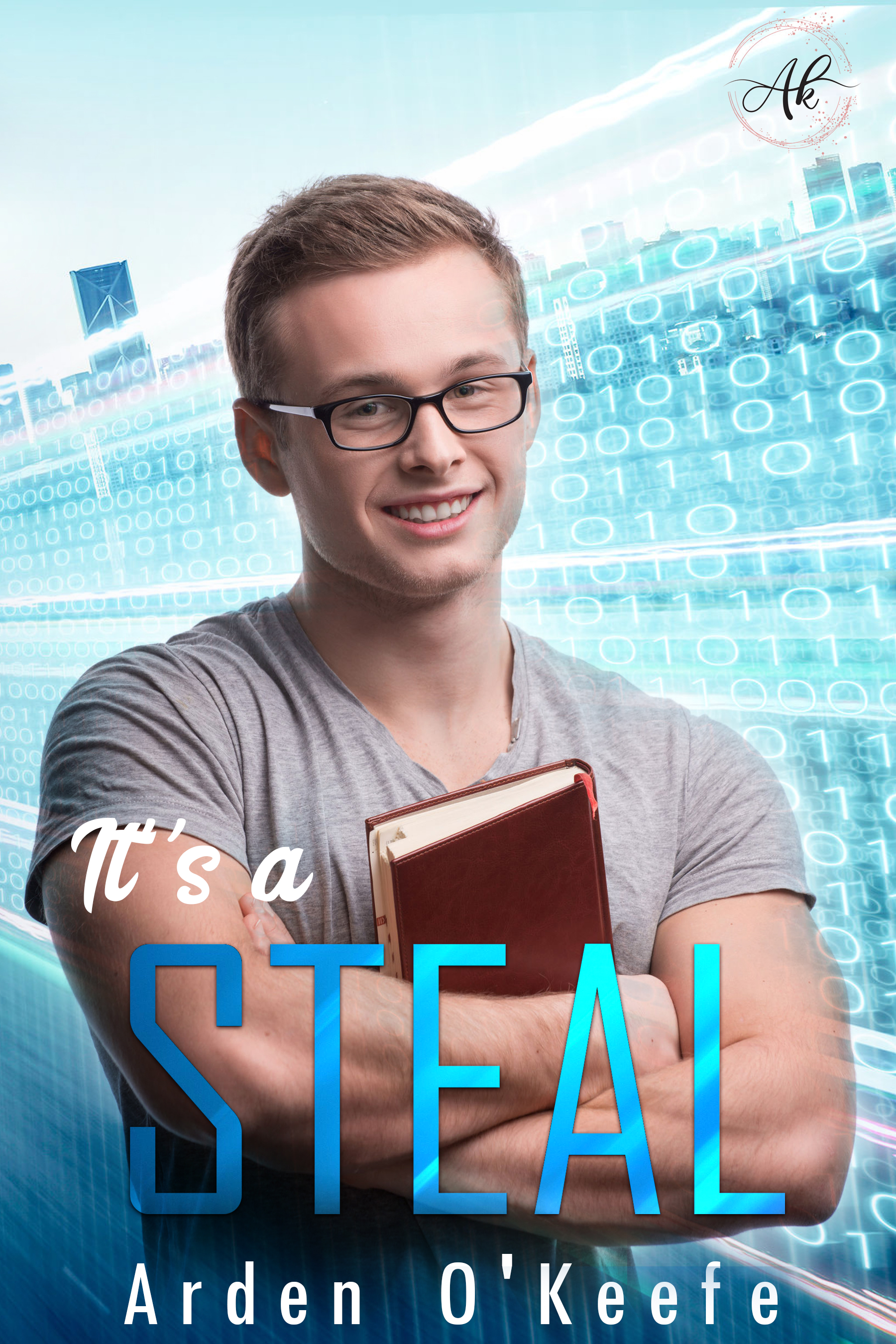 Edric Wilcher has realized growing up that there are simply two things in this world he can never imagine his life without—music and coffee. This is the reason why he chooses the life of a famous rock star—at least, famous in his own small town, and then, goes ahead and opens up Rockstar’s Hideout Café. Every morning he serves his regulars and has a nice, long chat with them before they go back to their daily routine. His charms work wonders on them. Thanks to the good genes bestowed upon him, he doesn’t look half bad. So, it strikes him as odd that this new customer who walks in that morning carrying a heap of books doesn’t seem to even spare him a second glance.

“Coffee” is what he orders and Ed goes out of his way to make him feel special. But the redheaded nerd—okay, a cute nerd, probably cutest he’s seen in his life—just leaves with his books, leaving even the muffin-on-the-house completely untouched. The mystery surrounding this guy gets the best of Ed and when he finds a book left behind by this customer, he can’t help follow the trail to see him just one more time. Even if it is to get a name.

Dean Harrett has somehow misplaced the one thing that was supposed to help him out of his current problems—and that thing is not a cheesy, romance novel. What matters to him the most is what he’s kept in the book—the perfect plan that can make or break his future. And that book has gone now. Only if he can remember where he’s last seen that book…

Of course! The café, where that annoying barista just wouldn’t leave him alone so he had to leave.

But now Dean has to get back there and look for himself before anyone can lay their hands on it. He doesn’t even want to think about the worst-case scenario of someone finding out what he is up to. But this only means he will have to face the annoying, but handsome barista again. Ugh!

The begging was new. But then so was everything else.

Although this wasn’t Dean’s first time, it’d been years since he’d had sex with any guy. No one had captured his interest long enough for things to escalate to this point—no one except Edric that was…

“I’m not,” Edric’s sexy breathless voice spoke, “But let’s just take this somewhere more comfortable, shall we?” And just like that, he held him by his waist and picked him up. It tickled. Dean giggled as he was literally swept off the ground and swiveled to switch places.

Being guided back as they continued to kiss, his calves suddenly hit the side rail and he stumbled backwards. Due to the impact, Dean ended up on his back, bouncing slightly. Watching Edric climbing on top of him with one of his knees resting by the edge of the bed and his body weight pinning him down there, Dean had several dirty thoughts cross his mind all at once. He licked his lips with anticipation.

With one swift motion, Edric pinched the bottom hem of Dean’s t-shirt from both sides and pulled it off his head.

Dean had to catch hold of his glasses before they could be knocked off, and laughed, “I’d better take these off.”

But an unexpected, “No!” echoed through the room stopping his actions. The dominating tone in which Edric said, “Let them be,” made him shiver under his touch. Dean watched as he bent down, supporting his weight on his right hand, and leaned closer to him. He could see the hem of his sleeve getting tighter, unable to contain the bulging muscles of his arm. Edric placed the huge palm of his other hand over Dean’s shoulders and let it explore around. Dean felt his pre-cum wetting his PJs as his skin enjoyed the feel of his warm hands. “You’ve no idea how hot you’re looking right now…” Edric whispered near his ears, slowly licking it, “…with them on…” He ran his tongue down the helix as he continued, “…lying down in front of me with no shirt on.” Dean hissed as Ed licked and bit his earlobe, a sharp pain mixed with an intense pleasure shot right through his whole body. “Do you even know what you’re doing to me right now, Red?”

“Hell! Do YOU know what you’re doing to ME right now, Ed?” Dean groaned. His mind screamed within, but his body continued to enjoy the attention. With his eyes closed, he adjusted his glasses and let his hands explore the back of Edric’s head. Running his hand through Ed’s soft hair, he pulled his face closer to him.

To celebrate Arden’s debut release they have organized a MASSIVE giveaway!
Head over to Facebook to enter for you chance to win:

An enormous, gigantic THANK YOU everyone who has pre-ordered IT’S A STEAL! This is a way of me showing how much I appreciate it. By following THREE easy steps (refer below), you stand a chance to win one of over TEN prizes!!! I call this giveaway MASSIVE for a reason … read on

Arden O’Keefe has several passions and reading is one of them. It is through reading the works of several loved authors that O’Keefe was inspired to craft out some personal creations. The muse never stops to motivate and that’s how the story of Edric and Dean just developed by itself. This is where O’Keefe begins the journey hoping that it doesn’t end anytime soon.