What happens when Baer spills his big secret about monsters and magic to a total stranger?

In Baer’s defense, he really thought Wiley was a lost brother.

This case of mistaken identity forces the cute artist to stay at the plantation house for his own protection while they search for a way to take down a witch.

He never should have gotten in Baer’s Jeep.

But in Wiley’s defense, Baer is really sexy. And funny. And so sweet. And did he mention sexy?

All his life he’d dreamed of superheroes and a life of action. He just never expected to find himself swept up into a world filled with monsters and goddesses.

Wiley will do anything to stay with this magical band of brothers and help them with their fight. He just wished he could be Baer’s soul mate.

There were about five people ahead of Baer in line—all of them staring at their phones or the shiny glass case of a tantalizing rainbow of doughnuts and pastries. Including the sexy blond Mini Cooper owner who was right in front of Baer in line. While Baer was a relatively average height of five ten, the blond was at least a delicate five seven or maybe five eight. The guy looked up from his phone as Baer stepped up behind him, and he flashed a nervous smile.

“Hey,” he greeted in a slightly husky voice and then flushed some more.

Yeah, this guy was all kinds of adorable.

“Mornin’,” Baer replied. “You ever been here before?”

The man shook his head, shoving his phone into his pocket. “No. It was recommended to me recently. When I woke up this morning, I just had to have doughnuts.” He gave a nervous little laugh. “I guess that’s the result of nonstop marketing at its best. It’s fall, so we’ve all gotta eat pumpkin-flavored everything for the next month.”

Blondie had the sexiest southern drawl. It wasn’t too thick. Probably a local, but he’d spent some time out of the area. Just enough to lose some of its natural thickness, but those lilting drawls still mesmerized Baer when he spoke, leaving him wondering how his lips and tongue wrapped around each vowel and consonant.

Good grief. He really did need to grab Grey for a boys’ night out in Savannah if he was going to start fantasizing about a nerdy twink’s mouth. Soul mates and forever sounded great, but it was clear that he needed to get laid. And what better time was there? Things were quiet. They weren’t running and fighting for their lives.

Pumpkin doughnuts and sex could do a growing boy good.

The bell hanging from the front door announced the arrival of another customer. Baer was about to ask the man’s name when the heavy scent of rotting flesh rolled through the room, overpowering the delicious miasma of frosting and fried dough.

He didn’t even need to turn around to know that behind him, pestilents had stepped into the bakery. It wasn’t enough that the alien race was attempting to steal the power of the earth to save their own dying planet while killing all Weavers in the process, but they had to interrupt his attempts at flirting as well? Just not cool.

Silently, Baer cursed himself and his luck. They’d all grown a little complacent over the past couple of months. They’d even started venturing away from the protection of the plantation without backup because the pestilents had stopped attacking.

Apparently they’d gathered enough numbers to make another go at the Weavers, and he’d not been paying enough attention to his surroundings to check to make sure there were no pestilents close. Instead of checking in with the animals in the area that there were no pestilents around, he’d let himself get distracted by big chestnut-brown eyes and a sweet smile.

Twisting around to glance over his shoulder, Baer swore under his breath to find a male and female pestilent standing in front of the door. Humans wouldn’t notice anything different about them, but Weavers could. The air wavered around them as if they radiated heat. And, of course, there was the godawful stench. Pestilents were not meant for this world, and their bodies started rotting from the moment they arrived. Their time in this place was limited, but what time they had was spent trying to kill the Weavers.

The pestilent woman wore a pair of ragged jeans, and her brown hair was pulled back in a tight ponytail, making her angular features seem that much sharper. A feral grin pulled across her thin lips when she spotted him. She lifted the shotgun in her hands to her shoulder and pointed it straight at his chest.

Baer sucked in a breath. Was she really going to open fire in a small building crowded with people? Everyone was going to be killed or injured. Not only one fucking Weaver.

Pivoting on the balls of his feet, Baer wrapped an arm around Blondie’s slender waist and dove over the closest table. A shocked yelp left the man’s lips, but he didn’t fight Baer as they tumbled to the floor. With his free hand, Baer grabbed the edge of the table, pulling it onto its side. They landed with the surprisingly thick wooden barrier at their backs just as the shotgun exploded in the room, slamming into the far side of the table and a scattering of chairs.

Get both in the Series 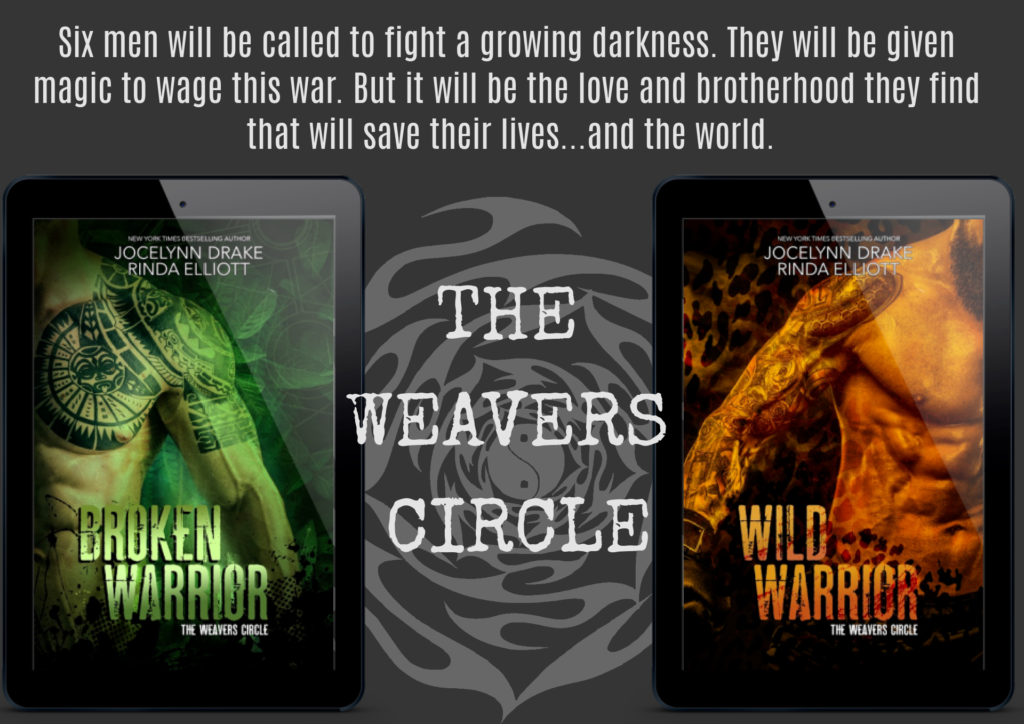