A childhood in foster care taught Carey Everett to hold tight to what he has. Enlisting in the Marines gave him purpose, but a life-threatening injury ended his career—and took his leg. Now fully recovered, Carey’s happier than he’s ever been. He has a fulfilling job, a chosen family and, best of all, a cherished friendship with Jase DeSantis, the platoon medic who saved his life.

Jase knows how to take care of the people he loves. As the oldest of seven, and then a Navy corpsman, it’s what he was born to do. Still, he’s haunted by his actions overseas. Playing music with his band keeps the demons at bay, but it’s a battle he’s starting to lose.

After a week of sun and fun in San Diego, Jase and Carey’s connection takes an unexpected turn. With change comes a new set of challenges. For Jase, it means letting someone else into his deepest pain. For Carey, it’s realizing love doesn’t always equal loss. In order to make their relationship work, they’ll each have to come to terms with their pasts…

…or risk walking away from each other for good.

With an oath, Carey broke away from Jase, turned, and strode off the dance floor.

Cursing, Jase ran after him.

“Carey, wait!” he called, but Carey didn’t stop as he pushed through the doors leading to the patio. It was almost empty, the chill of the late night air having driven most everyone back inside. Abruptly, Carey whirled and grabbed onto Jase’s T-shirt with both fists.

Bracing for a shove, or a blow, Jase staggered when Carey instead yanked him into the shadows just outside a soft pool of light.

“Damn you,” he hissed, his eyes glittering. “Damn you, Jase.” Despite the harshness of his tone, Carey didn’t let go of him, his fingers twisted in the fabric of Jase’s shirt. His lips were parted, breaths coming in pants, spots of color high on his cheekbones.

His heart thudding painfully in his ears, Jase deliberately took one step closer until their bodies were only inches apart. Carey turned his head away, but still didn’t let go, his grip tightening.

“Damn you,” he said again, but the words were without heat, softer, more like an exhalation. He dropped his head back to the wall, pulse throbbing visibly in the hollow of his throat, eyes drifting shut. “Oh God. I don’t know what’s happening to me.” His voice was barely audible.

Blood racing, body trembling, all Jase could do was wait him out. At last Carey opened his eyes, the normally brilliant blue dark with emotion. His gaze clung to Jase’s, his lips parting as Jase started to close the last few inches of distance between them…

Gasping, Carey shoved him back, then yanked him close again in an abrupt motion that had Jase slamming his palms against the wall to keep from crashing into him. He looked down at Carey’s fists, still twisted in his shirt, then met his eyes once more.

For one heart-stopping second, Carey’s grip loosened, then tightened again. Leaning in until their lips were only a whisper apart, Jase breathed, “Let me go. If you don’t want me to kiss you—”

The rest of his words were muffled by Carey’s mouth, crushing his. Hot, slick, eager, Carey’s tongue slid deep, almost devouring him. With a hoarse groan, Jase slanted his head, his own tongue thrusting, parrying. They bit and licked at each other, bodies straining, breaths sawing in and out…

Then Carey ripped his mouth free. “No.”

Struggling to focus, Jase staggered a bit when Carey pushed him away. For the space of several heartbeats they stared at each other, chests heaving, Carey’s body tense, coiled, as if ready to flee.

Seeing it, Jase forced himself to blow out a long, slow breath, and crammed his hands in his pockets as he deliberately took another step back, giving him some room.

“For what?” With an effort, Jase kept his voice low, calm. “I was a more than willing participant.” He waited until Carey met his eyes. “You think I don’t want this? Want you?”

His throat worked. “Losing you.”

“Losing me?” Jase took a step forward, but Carey put up a hand to hold him back.

“Three years ago, I did almost lose you. Over this.” He made a sawing motion between them.

“That was different.” Jase still kept his voice low, despite the emotion raging through him that made him want to shout at the top of his lungs. “This is—”

Pain stabbed Jase down low. “Is that what it feels like to you? Curiosity?”

“I don’t know!” Carey shoved his hands through his hair, then linked his fingers behind his neck, visibly striving for calm. He met Jase’s eyes again. “But whatever it is, it’s not worth risking our friendship over. I can’t—”

He sounded so distressed that Jase dredged deep and summoned a smile. “Then we won’t risk it. We’ll forget this ever happened, okay? Chalk it up to temporary insanity or something.”

The relief that spread across Carey’s face made his heart ache. “Yeah. Okay.” Pushing off the wall, he brushed past him, muttering, “See you at home.” 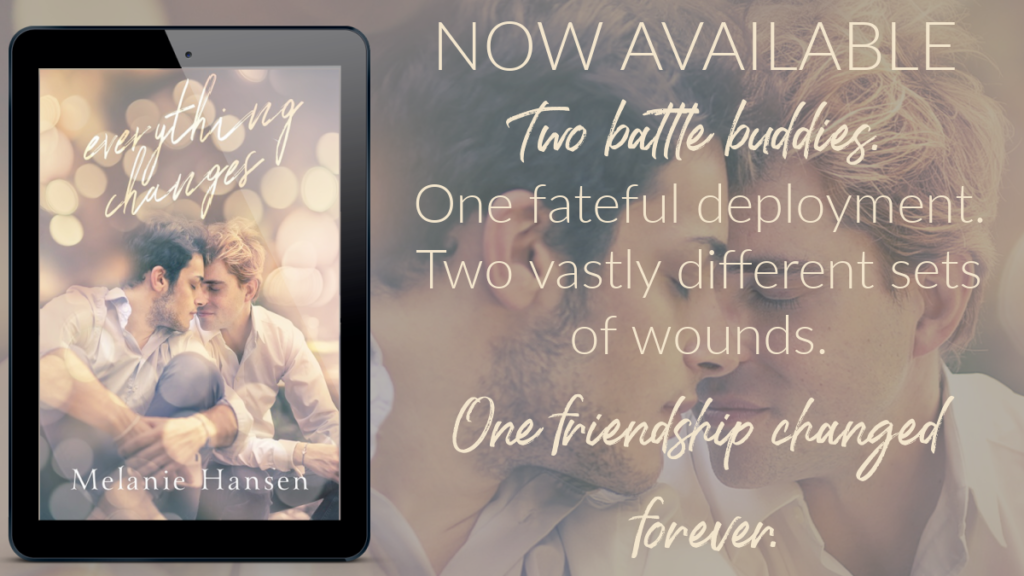 Melanie Hansen doesn’t get nearly enough sleep. She loves all things coffee-related, including collecting mugs from every place she’s visited. After spending eighteen years as a military spouse, Melanie definitely considers herself a moving expert. She has lived and worked all over the country, and hopes to bring these rich and varied life experiences to the love stories she gets up in the wee hours to write. On her off time, you can find Melanie watching baseball, reading or spending time with her husband and two teenage sons.