Royal envoys Calarian and Benji embark on a quest in the alpine duchy of Tournel. Things go rapidly downhill when the duke plummets to his death from the tower wall. Whoops—that’s going to be hard to explain. And it’s not as though they can just grab the nearest human and make him the new duke.

Enter one Lars Melker, a slightly gullible cowherd built entirely of muscles and sunshine, who happily accepts their word when they tell him he’s the duke now.

Soon Calarian and Benji are knee deep in teaching Lars how to fake it until he makes it. They’re also dealing with mountain trolls, a monster, a missing cow, and, most shocking of all, a growing realisation that their elves-with-benefits arrangement might be turning into something with feelings.

Add in their mutual attraction to Lars, and suddenly the hills are alive with the sound of emotionally compromised collectivist anarchist elves.

Also, what’s the deal with those leather shorts? 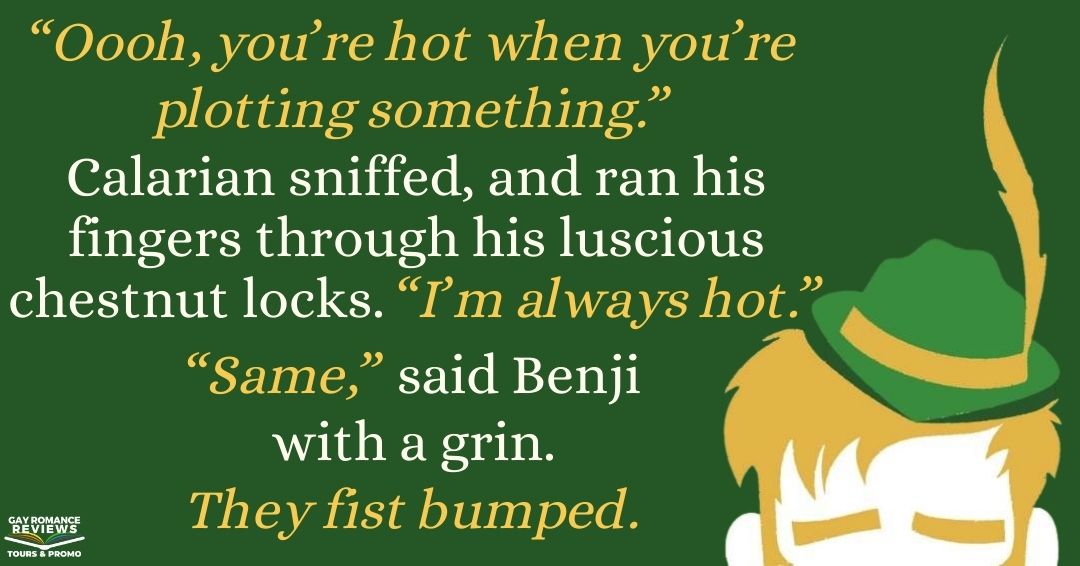 The sun was streaming through the windows when Benji awoke to a hammering on the door. Calarian had somehow ended up sprawled all over him, face buried in Benji’s hair, so Benji shoved him off onto his own side of the bed, and snapped, “What?” It was obvious from the way the sun was high in the sky that they’d slept late, but then, they’d been up late as well. Benji had had Calarian all to himself for a change, with no stupid attractive blond fake duke around distracting him, and he’d made the most of it, getting in not only a slippery friar but a rutting chimneysweep, before they’d topped the evening off with a nice, relaxing, plain old fuck. The sunlight was pouring through the windows, making the cabbage roses on the ugly curtains appear even more garish. Benji missed his charcoal house, where everything was black. If not when he got it, then certainly after a day or two. The door opened, and Gretchen strode inside. “Shouldn’t you be blacksmithing?” Benji asked, climbing out of bed and searching the floor for a pair of pants. “Did you kill Lars?” Gretchen asked, narrowing her eyes. “No,” Benji said. He shimmied into his pants. “Why? Is he dead?” “He’s missing, and Gunther says he ran off, and I don’t trust Gunther.” Gretchen folded her muscular arms across her magnificent chest, showing off the deep blue tattoos etched into her forearms. “Well, neither do I,” Benji said, and scratched his bare stomach. “Gunther’s a weaselly little shit.” He stared at Gretchen for a moment. “Oh, wait. Are you upset that Lars is missing and possibly dead? I thought you thought he was an idiot.” Gretchen cocked a brow. “I do think he’s an idiot, but that doesn’t mean I want him dead.” “Huh.” “Listen, Hannah came to deliver some bread to the castle this morning, and Gunther is telling everyone that Lars ran off. I smell bullshit.” “That’s probably leftover troll gunk,” Benji said. “Calarian got covered in it yesterday.” He walked back to the bed and poked Calarian in the ribs. “Wake up. Lars is dead.” Calarian flailed awake, using his fingers to divide the tangled curtain of his hair. “What? What do you mean he’s dead?” “Or missing,” Benji added. “You could have led with that,” Calarian grumbled, like a baby. “Wait. Who is this, and why is she staring at my penis?” “Don’t flatter yourself,” Gretchen said. “I ate a bigger bratwurst for breakfast. And I’m Gretchen. The blacksmith.” Calarian’s eyes glazed over in an expression of stunned worship that Benji recognised only too well. “Don’t bother,” he said, elbowing Calarian in the ribs. “She’s married.” “So? I can still look,” Calarian said, tossing his hair over his shoulders and continuing to gaze at the vision of loveliness in front of him. Benji scowled. Calarian really needed to get over his stupid habit of looking at pretty people, even super attractive people like Gretchen, who was admittedly a goddess.  Benji was plenty attractive, thank you, and Calarian should just look at him instead, and forget everyone else. Wait, what? Benji wondered briefly where that thought had come from, then shook it off and poked Calarian in the ribs again right where he was ticklish, just to make him yelp. “Now’s not the time to look. Especially since there’s a dead duke, again,” Benji reminded him. “Well, maybe dead. Definitely missing.” He scooped up another pair of pants and threw them at Calarian, who groaned as he got out of bed. They both scrabbled around to get dressed. Calarian ended up wearing one of Benji’s favourite black shirts, and Benji ended up with Calarian’s boots. He watched with some satisfaction at the face Calarian made when he slid his feet inside Benji’s. They were still damp from their bath the night before. “When did you see Lars last?” Gretchen asked. “Last night before bed,” Calarian said, and Benji nodded. “Gunther is telling everyone that he ran away,” Gretchen said. “Which… well, he is emotionally attached to his missing cow, so he might have gone looking for her again, but he’s also not the type of man who’d run from his responsibilities.” “Too good,” Calarian said, at the same moment Benji said, “Too stupid.” “Yes,” Gretchen said.

To celebrate the release of Elf Defence, Lisa & Sarah are giving away a $20 Amazon Gift Card!