“He’s a thug… a really nasty piece of work.”

When young Clayton Kerry, member of a notorious Worcester family, is found dead on an abandoned factory site, it looks like an accident. Some even say it was what he deserved. But headteacher Alun Blake’s refusal to sugarcoat the truth about the pupil he excluded causes outrage in the local community and sparks a vendetta against him that rapidly spirals out of control threatening both his life and that of his daughter.

When Detective Inspector Summerskill and Detective Sergeant Lyon investigate, they find Clayton’s death was by no means as clear cut as it had seemed and that they are at the start of a trail that will take them into the heart of a school and far beyond the boundaries of their city, to crime on a national scale.

As they uncover what really happened, Summerskill and Lyon are brought face-to-face with uncomfortable truths about their own lives and relationships. Personal loyalties are tested, and before the case is through, at least one more person will die.

Sticks and Stones is the third in the Summerskill and Lyon series of police procedural novels.

“And some sad news just in. A tragic accident today on the site of one of the county’s oldest landmarks has resulted in the death of a Worcestershire schoolboy. Fifteen-year-old Clayton Kerry was killed when one of the walls of a building on the site of the old William Fitzmaurice brewery collapsed.

“The Fitzmaurice brewery, once the producer of some of the county’s most prestigious beers and ciders, has been a familiar site on the banks of the River Severn for as long as anyone in the county can remember. For decades, however, it has been closed and deserted, its buildings neglected and crumbling. All attempts over the years to procure the site for redevelopment have been blocked by legal wranglings within the Fitzmaurice family.

“James Fitzmaurice, oldest surviving member of the brewing family, today said that he and his family were deeply saddened by the death but that they could take no responsibility.

“We’ll have more on that story in our local news bulletin later this evening. And now, over to Duncan Lewis with today’s weather…”

The picture on the screen changed to an earnest young weather forecaster in glasses, smiling in front of a map of the country even as a mass of CGI storm clouds crept in from the west.

“Tragic accident.” The man in the bed yawned, muted the television, and carelessly tossed the remote control to one side. “It was hardly going to be an amusing accident or a laughable misadventure, was it?”

Sitting on the other side of the bed, Dave Lyon paused in the act of pulling on his trousers. “And is that all you’ve got to say about it?”

The man he’d addressed gave one of his typical crooked smiles, laced his hands behind his head, and lay back against the large pillows. The sheets were pulled down low over his stomach, and Dave didn’t doubt that their position and the pose had both been deliberately chosen to afford him a good view of the body he was getting ready to leave. It was a great body. “What do you want me to say?” Sean Cullen asked. “That I’m heartbroken over the death of some kid I’ve never even met? Touch hypocritical don’t you think?”

“You’re an MP. I thought that was part of the job description.”

Cullen smiled again. Dave’s barb hadn’t pierced his thick politician’s skin at all. But then Dave hadn’t thought for a second it would. “And you’re a detective sergeant. Didn’t you detect anything about that report?”

“What do you mean? It was an accident. The report didn’t say anything about suspicious circumstances.”

Cullen tutted slowly, clearly enjoying himself. “You heard them say the old Fitzmaurice brewery has been closed for years, and I mean years. Even I used to slip through its fences and hide in the buildings when I was a kid.”

“Bunking off from your posh public school for a crafty fag with the lads?”

“I was never one of the lads, David, and even if I had been, I wouldn’t have wanted them with me while I was enjoying my cigarette and a copy of Zipper or Vulcan or whatever I’d managed to get my hands on. Anyway, these days the old Fitzmaurice brewery has got more barbed wire around it than the nearest HMP but it’s still notorious as a hangout for kids drinking and taking God knows what. Which means, the victim of our tragic accident would have had to walk through several very obstructive fences and have failed to notice several very prominent warning signs before he made it to the buildings where he was no doubt in the act of doing something very naughty before a ton of bricks fell on his trespassing little head.” Cullen assumed an expression of mock surprise. “I know my constituency, sergeant. Don’t you know your beat?”

Annoyed with himself and with Cullen, Dave was damned if he’d show it. Now he thought about it, he did remember some talk back at the Foregate Street station about the brewery, but he was still comparatively new to the area, and neither the name nor the reputation of the place had struck a chord when he’d heard that television report.

Cullen, of course, made no allowances. The product of an Oxford education, where he had been on a winning Boat Race team, and of an adversarial parliamentary system where he had been, when elected to the House of Commons over a decade previously, one of the youngest MPs in the house, Sean Cullen was an extremely competitive man. And that competitiveness, Dave was discovering, extended all the way into his personal life.

“You think kids have changed so much?”

“No. But they do have the internet. Any young lad these days can pleasure himself blind in the comfort of his own home. Straight or gay.”

Cullen reluctantly conceded the point. “Mind you, it wasn’t all just about the fags and mags.” He yawned lazily, like a self-satisfied cat recalling an empty carton of cream.

Dave buttoned up his shirt, began the search for his shoes, and refused to give Cullen the satisfaction of asking what he meant by that. How was it you could only ever find one shoe when you were trying to leave a guy’s bedroom? “Why’d you even want the television on anyway?” he asked as he searched. “You trying to impress me with the size of your screen?”

“I thought I already had impressed you. And I was hoping,” Cullen went on, before Dave could reply, “to catch something about my Fitness First initiative. I did an interview about it yesterday for the local news. They said it might be on today. We’ve probably missed it. Or it’s been dropped in favour of the tragic accident. I’ll check again later.”

“Want to see how good your profile looks on the television?”

Cullen smiled, the sheet over his body slipping down another inch, almost accidentally. “I know how good it looks on television.”

Yeah, I’ll bet you do. Like the body, Sean’s was a great profile. With those cheekbones, there had to be aristocracy somewhere in his family bloodline. “I’m only surprised you haven’t got a mirror over the bed.”

Cullen yawned. “Too seventies. And it would get in the way of the cameras.”

Missing shoe found, Dave stood, reached for his jacket, and forced himself not to look up at the ceiling over the bed. A joke. Just a joke. Don’t give him the reaction he wants. “I’ll see myself out, shall I?”

“I think you know the way by now.”

At the bedroom door Dave stopped, hand on the handle, and looked back. Cullen’s eyes were closed as if he was already drifting into sleep. “You never ask me to stay.” It was a simple fact, calmly stated.

Cullen didn’t open his eyes. “Would you?”

Dave considered. “No. See you later.”

Neither man suggested when or where that might be.

This had been their third hookup at Cullen’s house since that night they had walked out of Gallery 48 together, and this was pretty much the way it had ended the previous two times. Dave couldn’t see that changing any time soon. 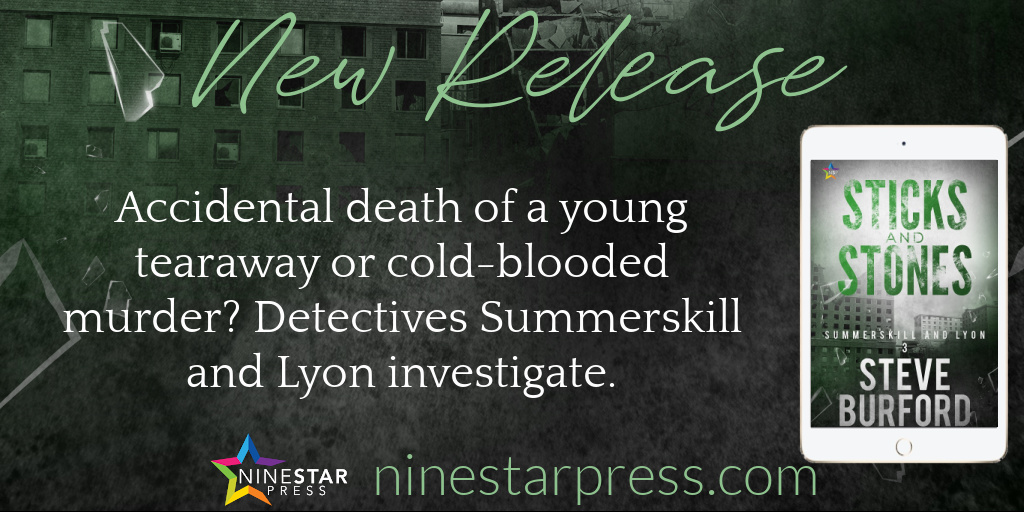 Steve Burford lives close to Worcester but rarely risks walking its streets. He has loaded conveyor belts in a factory, disassembled aeroplane seats, picked fruit on farms, and taught drama to teenagers but now spends his time writing in a variety of genres under a variety of names. He finds poverty an effective muse, and since his last book has once again been in trouble with the police. (He would like to thank the inventor of the speed camera.)