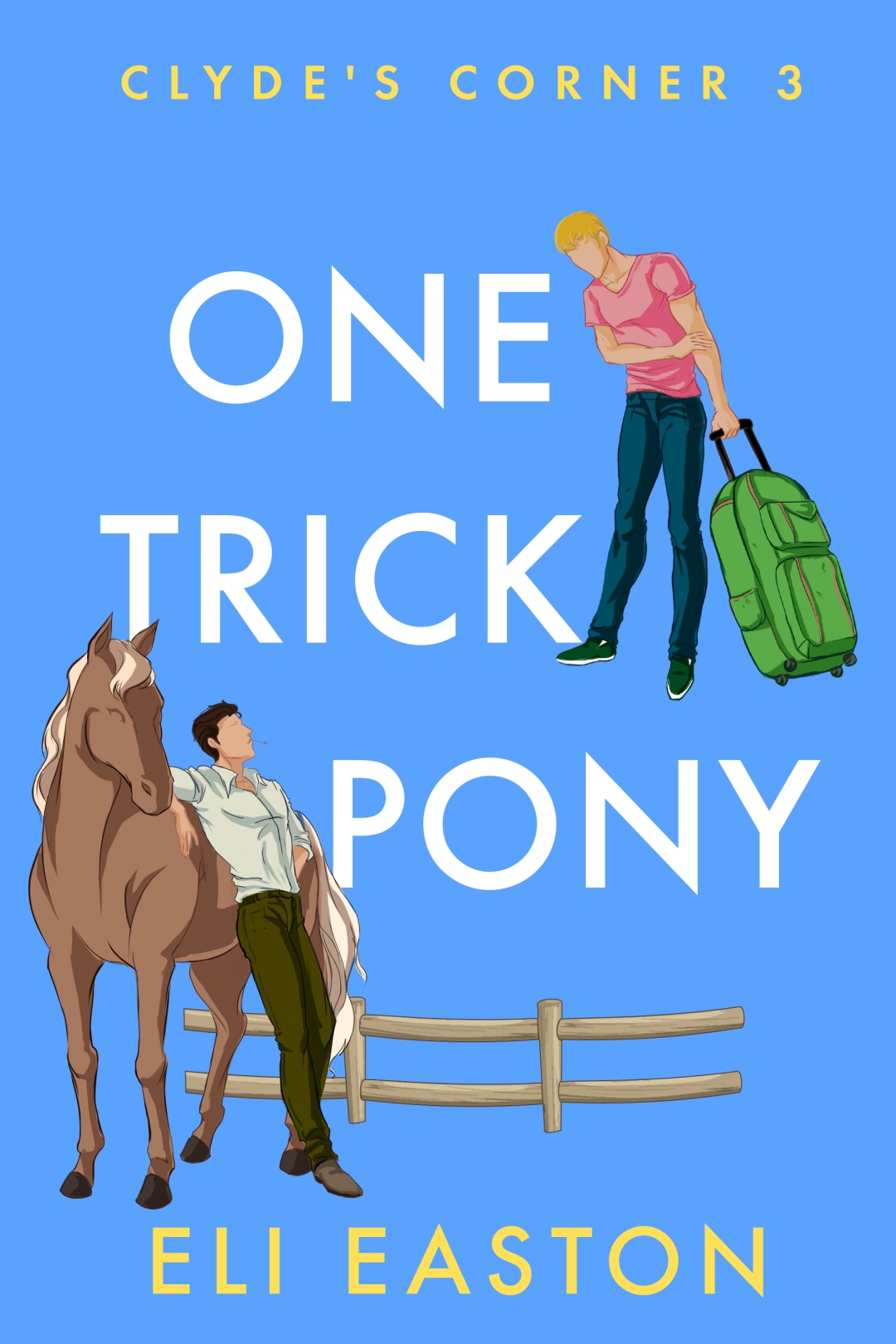 Forgiving yourself is the first step toward finding true love.

Henry Atkins is determined to turn around his no-good, sorry life and prove to the residents of Clyde’s Corner that he’s not the town bad boy anymore. If going to church every Sunday with the Ladies Society is what it takes to polish his reputation, he’s all in. But when every secret fantasy in his head walks into the stables at Muddy River Ranch, the straight and narrow path he’s on takes a wild detour. It never felt so good to be so bad.

The two men are both seeking a fresh start, an escape from the demons of their past. Fly fishing lessons on the river uncover the surprising number of things they have in common and forms a heartfelt bond that might save their weary souls. Only Micah’s past isn’t through with him yet.

Micah let go of Billy’s dick and flopped onto his back on the bed, staring at the ceiling. His cock crawled up his thigh as it deflated from barely half-mast all the way to zero. No, make that minus one. Fuck.

“All right, everyone. Take a break for fifteen!” Frankie barked.

Billy looked worried. “Was it me, Devon? Is there something I can do different?”

Micah sat up enough to give Billy an apologetic smile. Billy was a new B2B model, a cute red-headed jock, and he was still in those early nervous days. Micah—stage name Devon—was the production company’s star, and he was supposed to be the pro. Yeah, right.

God, that sounded pathetic. Like the old cliche. Micah internally winced and Billy got a glint in his eye, like he was secretly pleased. Pleased that Micah was losing it? Sure. All the guys at Boys 2 Boys would like to knock him off his pedestal. And he was making it easy for them.

“It’s not you, kid. You’re doing fine.” Frankie brought over a robe for Billy. “Micah, let’s take a walk.”

Micah rubbed his face, then got up, put on his own robe, and followed Frankie from the room. Frankie led him down the stairs and out the back door to the pool area. A few of the models were lounging there, so Frankie continued on down the path to a bench surrounded by white stones and cactus. The sky was brilliant blue and it was hot. Then again, it was always hot in Vegas. It kept his blond hair bleached to the color of sand and his skin golden all over—they sunbathed nude at the B2B house.

Frankie sat heavily on the bench and sighed. He ran a hand over his buzz cut. He was a pudgy man in his early forties, and Micah had known him a long time. They were friends of a sort, but the business always came first with Frankie. “Fuck’s sake, Micah. Did you dose up this morning?”

“Yes. I do every time.” Micah hadn’t needed the little blue pills in the early days of his career. And now even they weren’t working.

“Then what’s the problem? Talk to me.” Frankie was using his sincere fatherly voice.

Micah slumped forward, elbows on his knees. “I’m burned out. I’ve been telling you that for over a year now. It’s fucking with my head, I guess. I’m sorry.”

“I thought we agreed you’d stick it out through the summer and take a break in the fall, before the holiday shoot schedule starts. That was the plan.”

“You’re fucking twenty-three. There shouldn’t be a goddamn thing wrong with your dick!” Frankie yelled back. And yeah, he could always hit back harder and worse, getting Micah where it hurt. Which was why he rarely fought with Frankie.

Shame burned Micah’s cheeks, and he glanced over at the models lounging by the pool. Yeah, they’d heard. Great. Some sex god. Boys 2 Boys number-one star for the past four years, and now he couldn’t even get it up.

“Then what’s the problem, exactly?”

Micah wished he could explain it. But he wasn’t smart like that, not with words. And he didn’t even understand it himself. “It’s just always the same. And the other guys aren’t into it. The fans are getting weirder too. I dunno. They want to take everything.”

“Oh boo-hoo,” Frankie snarked. “I have passionate fans! Believe me, kid, if I could swap jobs with you, I would!”

Frankie always said that too. And Micah didn’t doubt it. Frankie perved on all the guys. But Micah had gotten over that long ago. It wasn’t fun to fuck around with a guy who made a disgusted face the minute the camera turned away. Unlike Micah, most of the models at B2B really were straight. He picked up a dead leaf lying on the white stones and focused on it, pulling it apart section by section.

More and more, it felt weird and wrong to be doing those things to a guy who was only in it for the money. Like he was using them or something. Even though it wasn’t Micah who paid them or made the decision for them to do it. He was in it just like they were—to make bank. Losing himself piece by piece, paycheck by paycheck.

Sometimes Micah wondered what would be left of him when—if—he ever got out.

Frankie sighed. “Fine. You know what? Fuck it. I’m writing you out of the shooting schedule for a month. Starting immediately. Go take some time off. Get your head straight. I need you back and at one-hundred-percent by July 19th for the start of the Summer Heat shoot.”

He could have off until July 19th? It was June 14th, so that was even more than a month! That sounded amazing. “Really? You mean it?”

Frankie’s lips were pressed tight, clearly not pleased. But he shrugged. “Absence makes the heart grow fonder, right? Maybe a lack of Devon material will give you a boost when you get back.” He gave Micah a hard look. “But I’d advise you to come back fresh and ready to razzle dazzle. Fans are fickle, and one dick is a lot like another. Just remember that. You’ve only got a few more years to earn top dollar as it is. Believe me. A time’ll come when you can only dream of being number one.”

Frankie had a way of making Micah feel ancient and on the cusp of being a has-been. That schtick had worked for years. But even that couldn’t dull the joy Micah felt at being able to get away, even for a little while. “Thanks, Frankie. I really, really appreciate it. I promise I’ll get some rest.”

As they walked back to the house, Frankie shouted, “Connor—you’re on with Billy in ten. Go get prepped!”

To celebrate Eli’s new release, we are giving you a chance to win 1 of 2 e-sets of the Clyde’s Corner Series (so far)!

Enter through the rafflecopter below!