What do you do when you can’t cast spells? You make your own magic.

Jackson Pryde was never great at wielding magic. Instead, he works as an artificer, crafting enchanted devices in the Black Market, a shadowy bazaar of wonders. But Xander Wright, the mouthy, pretentious mage next door, hates all the hammering in Jackson’s workshop.

When a chance assignment forces them to team up, they discover a terrifying predicament. Something is driving members of the magical community into murderous rages. Jackson and Xander must combine might and magic to find the source of the Fever and stop it. Can they put aside their differences long enough to end the Fever, or will they succumb to its bloodthirsty curse?

“Jackson Pryde,” said a voice from behind me. “Just the man I was looking for.”

My stomach fell. Of course. Drama. These days I couldn’t even make it three minutes outside my front door without running into something – or more specifically, someone annoying. I sighed, plodding as I turned around to face my nuisance neighbor.

“Xander,” I said, motioning at myself. “Please. I’ve got cuts to treat and a whole bunch of gryphon dander to wash off. I don’t have time for this.”

Xander Wright’s dark lashes fluttered as his eyes traveled down, then back up my body, his nose only slightly wrinkled in distaste. He was the kind of person who didn’t show you his disgust so openly only because he was taught not to. That was how polite society did it. That was how the Grayhaven boys did it.

“Yes,” he said. “I can see that you’ve been on another one of your excursions.”

That last word was loaded with meaning, like going out to spar with gryphons was something only someone of a certain class of people would stoop to. Xander Wright would never need to punch a gryphon or work a day in his life, not with his infinite riches. My fingers flexed, missing the caress of the Gauntlet that sat somewhere inside my backpack.

The Gauntlet went with me everywhere, honestly. Even back when it wasn’t yet properly functional, it just felt right to have it on my person at all times. It was the artificer’s burden, I suppose. A mage walked around with all his weaponry already loaded inside his soul, at the back of his tongue. In case of attack, I still needed to shove my hand up a glorified glove and punch things to custard. It wasn’t all that bad, really. Magic must be nice, but I really liked punching things, too. Things like Xander Wright’s stupid face, and his stupid pink mouth.

“Some of us have to work to eat, Xander,” I said, putting sour emphasis on his name, like it was a wedge of rotten fruit I couldn’t wait to spit out.

“I empathize with your plight greatly, Jackson,” he said, returning the favor, his eyes glimmering. I’d probably describe him as handsome if he wasn’t such a colossal pain to deal with. I already knew what he was planning to complain about, anyway. “But I do wish you would tone down the noise in your workshop. You kept me up all night last night. Again.”

A spark of anger ignited in my chest. My plight? And really? Was he really going to bitch about the workshop again? But I knew he was baiting me, and nothing made Xander happier than seeing that he’d set me off. Eye for an eye, then. I leaned against my front door, cocked my hip, then folded my arms across my chest, in a way that I knew would accentuate my assets. Suddenly, having so much exposed skin wasn’t such a bad thing after all.

When I spoke, I made sure to purr. “Are you sure it was my noise that kept you up all night, Alexander?” 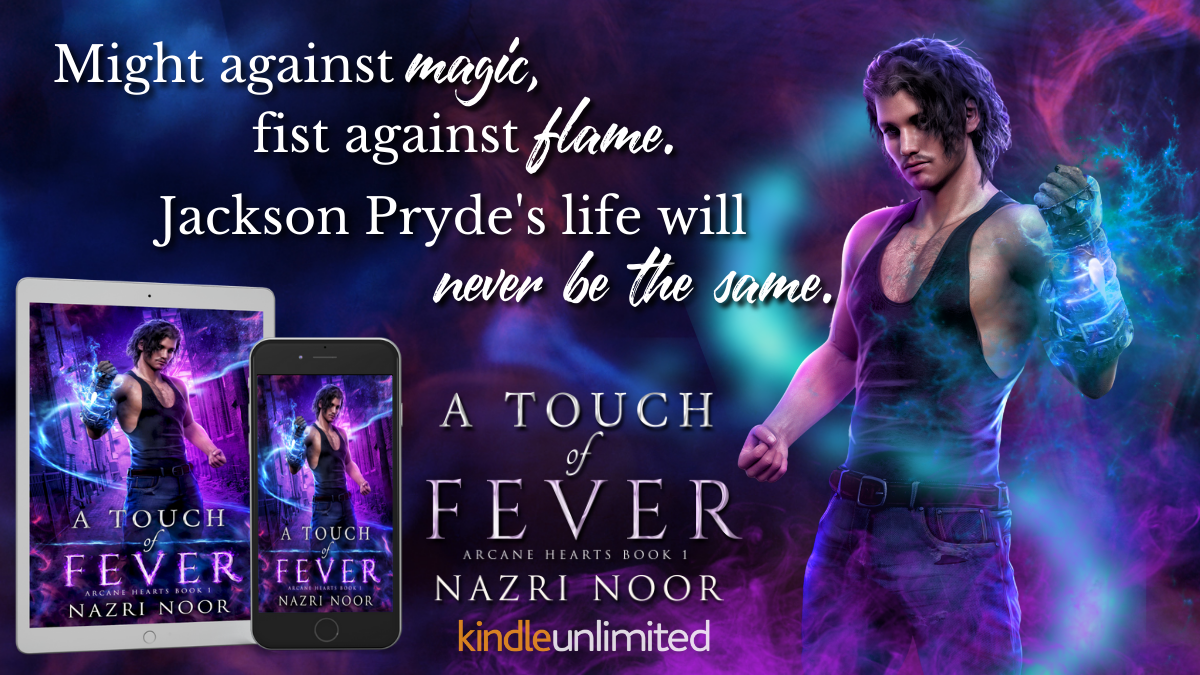 To celebrate the tour of A Touch of Fever, Nazri is giving away a $25 Amazon Voucher!

Hi, I’m Nazri, a Filipino-Malaysian author based in California. I’m trilingual, but I really only write in English. I can also speak just enough Sindarin and Valyrian to impress absolutely no one. My urban fantasy novels focus on heroes who use wits, style, and their wildly unpredictable magic to save the day. Think sass and class, while kicking ass.

TL;DR: I’m a huge nerd. Follow me on Amazon and BookBub, or send me an email at nazri at nazrinoor dot com. I love hearing from readers, and I’m also really, really starved for attention. And yes, that’s my real hair. I try to donate it to the American Cancer Society as often as I can. Also, have you heard? You can get a free book right here.