Release Blitz, Excerpt & Giveaway: Pick Me (The Sunday Brothers, Book 1) by May Archer

Release Blitz, Excerpt & Giveaway:
Pick Me
By May Archer

The job at Sunday Orchard was supposed to be temporary.

A chance to gain some work experience. To have some fun. To get away from my overprotective brothers. To maybe, possibly encounter some lumberjacks in their natural habitat before moving on to the dream career that awaited me in the city.

I had not expected to be welcomed into a family of gorgeous and weirdly efficient lumberjack-types myself. Or to find a purpose in the tiny Vermont town whose claim to fame seemed to be apple-based products and copious amounts of charm.

And I most definitely hadn’t expected to fall for Knox Sunday, my grumpy, burly, fifteen-years-older, reluctant roommate, with his infuriating lectures, his hot-as-fire body, his superior attitude, his snarky humor, and his stealth cuddles.

Now I find myself making excuses to delay my big dreams… just for a little while.

But Knox has unfulfilled dreams of his own. A career he walked away from. A big city life in Boston he left behind when he returned to his hometown to help his family. He claims he’s not looking for anything permanent, and I’ve never been one to put down roots.

My big life is waiting for me somewhere other than Little Pippin Hollow. So why does it feel like I’ve finally found the home of my heart?

And how can I get Knox Sunday to… pick me?

Have you ever had someone take an instantaneous and irrational dislike to you? I had not… until I’d arrived at Sunday Orchard.

When I’d finally, finally pulled down the long driveway from the road, it had been the golden hour. The place had been gorgeous in the early evening light—menacing cattle aside—and very nearly empty, since the Orchard was closed Tuesdays and Wednesdays. Webb had greeted me with a handshake and introduced me to his uncle Drew, his sister Emma, his son Aiden, and his younger brother Hawk, all of whom had been welcoming and friendly and lovely. He’d shown me briefly around the office and given me a plate of dinner they’d kept warm for me. Then he’d helped me drag my big suitcase up to my new barn-apartment.

I’d been so tired from the drive that I’d nearly been sleepwalking at that point, so I hadn’t seen Knox emerge from the apartment’s tiny bathroom dressed in nothing but a low slung towel until I’d walked smack into his naked chest and bounced off it. He’d been startled, obviously, and he’d reached out his hands to steady me, while I’d tried very hard not to chub up right then and there, because ohmyflippingGod, he was the guy from the picture.

That the guy from the picture.

The happy-go-lucky one with the devilish grin that made my stomach fizz like pop rocks. And he was standing right in front of me, close enough that I could watch the lucky little water droplets cascade from his beard down his thick, muscular shoulders.

I would swear to you until my dying day that when I first glanced up at his face, his fingers had clenched around my biceps for half a second and his eyes had flared with interest—with want—like Webb hadn’t even been in the room with us. And at that moment, you could have told me that Vermont contained nothing but rabid tourists and homicidal cows, and I would have told you it was all worthwhile, because holy shit, lumbersexuals were even hotter in their natural habitat.

But then Knox had taken a step back, given me a single up-down, from the toes of my worn Birks to my Mordor Fun-Run t-shirt, and proclaimed, “This child is the programmer you’re paying an arm and a leg for, Webb? The one you expect me to share an apartment with? For fuck’s sake, the kid was supposed to be here hours ago. He can’t even tell time.”

Then he’d stalked off to his bedroom, leaving me gaping after him while Webb stammered out a lame-assed explanation about Knox’s “minor health issues” forcing him to leave his “dream job” in New York, and how he was having a “tough time adjusting” and blah blah blah.

Like that was an excuse to be rude to someone? Please.

To celebrate the release of Pick Me, we’re giving away 1of 3 eBooks from May’s published works!
Enter the Rafflecopter giveaway for your chance to win!
A Rafflecopter Giveaway
Direct Link: http://www.rafflecopter.com/rafl/display/cc0f2a57318/? 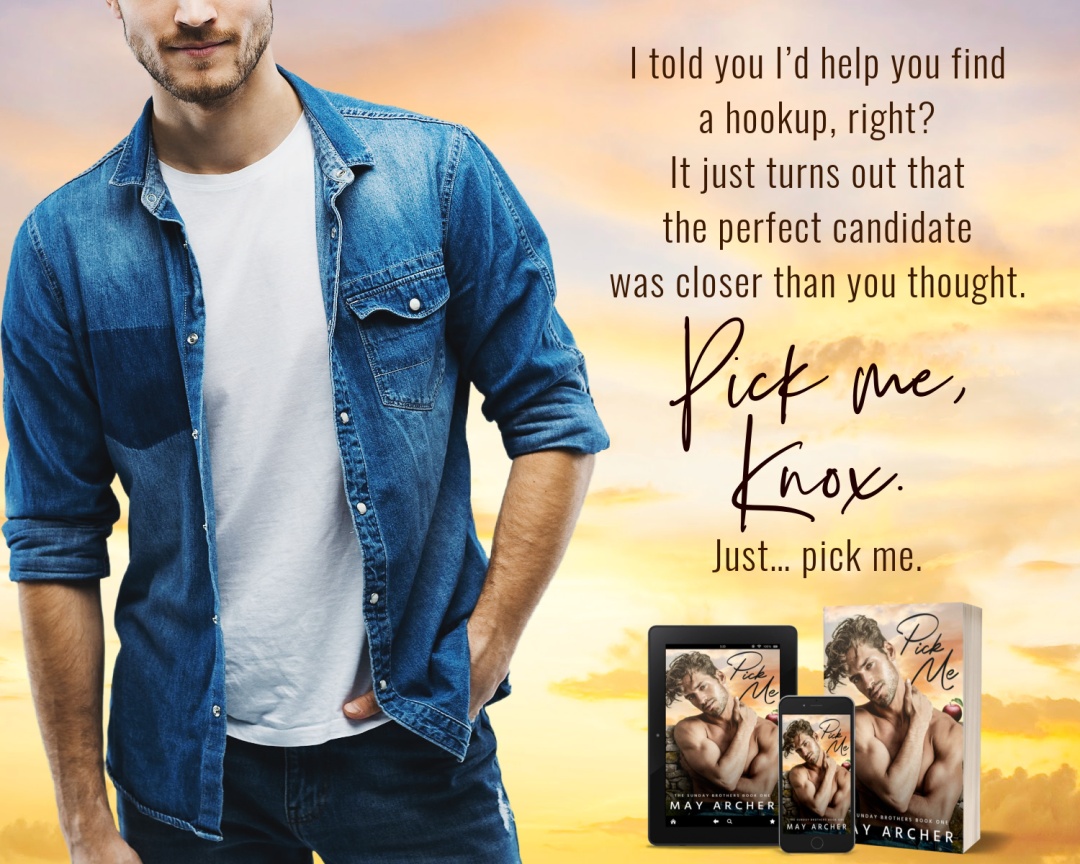