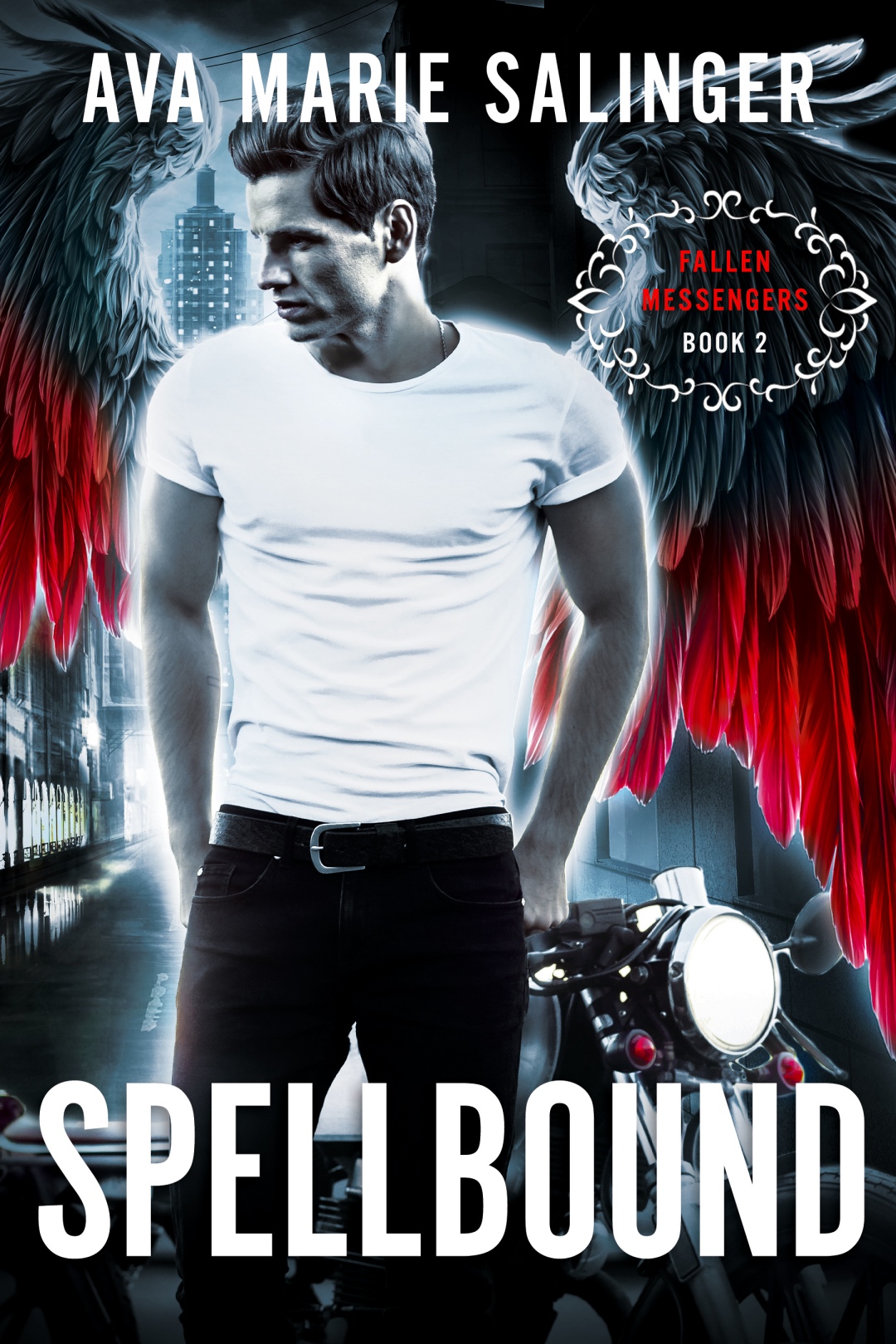 Can Cassius and Morgan overcome an elusive enemy and save a young girl’s life?

Eden Monroe has spent her entire existence believing she has no magic. Shunned by her mother Brianna and the magical bureau Hexa, she runs away from home when she is forced to embrace a future she never chose, only to fall into the hands of ghastly monsters from the Nine Hells. After being rescued by a mysterious Dryad with secrets of his own, Eden realizes there is more to her past and future than she could ever have imagined.

When San Francisco PD asks Argonaut to assist them in solving a series of strange bank robberies, Cassius Black and Morgan King uncover a disturbing plot that points to an unknown artifact hidden somewhere in the city. Their investigation soon has them crossing paths with a desperate Brianna, who seeks their help in finding her missing daughter. When the witch reveals the shocking circumstances surrounding her daughter’s birth as well as the deadly magic sealed inside the young girl’s body, the Argonaut agents realize their case is linked to Eden and the weapon of devastating power the bank robbers are after.

Can Cassius and Morgan defeat the malevolent organization behind it all and save Eden from her cursed fate? Or will the young girl suffer a destiny worse than death itself?

Spellbound is the second novel in the gay urban fantasy romance series Fallen Messengers. If you like your paranormal adventures full of action, magic, snark, and a host of steamy angels and demons, then you’re not going to want to miss this jaw-dropping, fun-filled ride! They exited the elevator on the penthouse floor, Cassius’s steps heavy as they approached his apartment. He unlocked his front door. A surprised look danced across his face when Morgan dropped a kiss on his temple and started walking away.

“I’ll grab a shower and a change of clothes at my place first. Why don’t you go ahead and get ready for bed?”

Morgan kicked off his boots in the hallway of his apartment and stripped out of his clothes on the way to his bedroom, his mind full of the man he had just parted company with. Though he’d wanted nothing more than to take Cassius in his arms and tell him everything was going to be okay, he didn’t have the right to make promises he couldn’t keep. Besides, Cassius needed some space right now.

He’d just turned the shower on and stepped under the hot spray when light footsteps sounded behind him. Strong arms wrapped around his waist. A warm, naked body pressed against his back.

Cassius rose and pressed his mouth to his, his cheeks flushed and his eyes molten gray with need. Morgan’s pulse quickened, lust instantly flooding his veins. He cradled Cassius’s face in his hands and deepened the kiss, the angel welcoming his tongue with a soft moan and a breathy sound.

There were times when Cassius got like this. When he got needy and initiated their lovemaking. More often than not, it was when the darkness inside him got to be too much. When five hundred years of unhappy memories and loneliness came crashing down upon him.

In those moments, Morgan became the anchor he sought. The person who could ground him and carry him through the darkness and into the light. The one being who could make him lose himself in pleasure so fierce it purged him of all his bad thoughts and his insecurities and regrets.

It was a role Morgan gladly accepted. One he embraced with open arms and cherished above all else. That this man, this angel who was the most powerful among the otherworldly, would come to him in his moments of weakness and seek his heat to make him forget this cruel world was Cassius’s unspoken confession of love to him. And so Morgan gave it his all. He took Cassius to bed and surrendered his body, his heart, and his soul to the angel in his arms, his every touch and kiss an admission of his own feelings for the beguiling Empyreal.

Cassius’s pants and moans echoed sweetly in Morgan’s ears as Morgan worshipped him with his hands, lips, and tongue, Cassius’s own fingers urgent on Morgan’s flesh and in his hair. His breath hitched when Morgan finally went down on him, his cock trembling and weeping on Morgan’s tongue, his heels digging into Morgan’s back.

Morgan’s dick throbbed painfully where it pressed into the mattress. He focused on Cassius and bobbed his head up and down his hot shaft from the root to the tip, his hands fixing the angel’s dancing hips as he writhed and arched on the bed, taking his time to blow him slow and deep. The powerful sucking motions of his mouth and jaw soon brought Cassius to an explosive climax, the angel’s harsh cries loud in the dark bedroom, his orgasm making the connection between their soul cores spark with fire. Savage satisfaction coursed through Morgan as he swallowed the hot cum flooding his throat, his gaze locked on Cassius’s pleasure-glazed eyes as the angel looked down his shuddering body at him, fingers clenched tightly in Morgan’s hair.

“Show me.” Morgan dropped a kiss on the tip of Cassius’s half-hard cock as he let him go, his voice a low growl. “Show me what you want me to do to you, Cassius.” 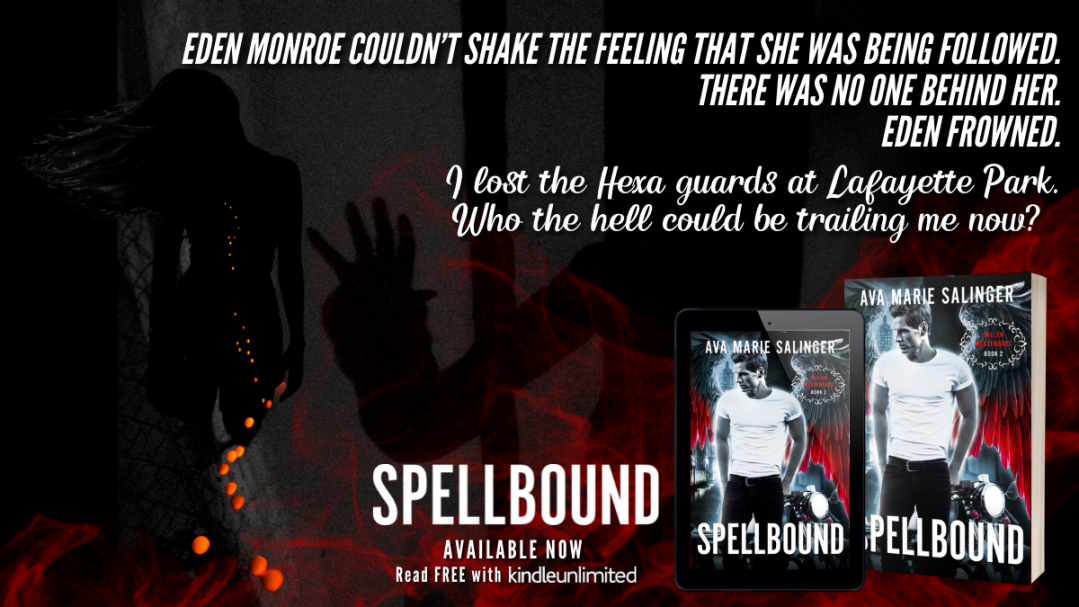 To celebrate the thrilling release of Spellbound, Ava is giving away: Ava Marie Salinger is the pen name of an Amazon bestselling urban fantasy author who has always wanted to write scorching hot M/M urban fantasy. In 2021, she launches FALLEN MESSENGERS, her first M/M urban fantasy romance series. She also writes contemporary M/M romance as A.M. Salinger. When she’s not dreaming up hotties to write about, you’ll find Ava creating kickass music playlists to write to, spying on the wildlife in her garden, drooling over gadgets, and eating Chinese.