He was the freaking Air Weaver. Not exactly what he expected when he got kidnapped by the pestilents, but Hale’s good rolling with the punches.

He can take a little time away from his pursuit of a doctorate in astrophysics to save the world.

Except that the final spell is poised to kill all the Weavers and their last hope lies with him finding his soul mate.

As the Keeper of the Heart of the Earth, Harrison must bring the final key to the Weavers if they’re to stop the pestilents.

He’s trained for this task his entire life. And he’s prepared to die just like his father did with the last generation of the Weavers.

But what if saving the world isn’t enough anymore?

What if the only thing that matters is saving Hale?

Bullets whizzed through the air closer to him with two shots digging into a column not far from his head. He whipped the gun around to spot where two pestilents were running toward him with guns drawn. Hale gasped and backpedaled. He squeezed the trigger, but nothing happened. Shit. The safety.

He fumbled with the little switch, but it was the pounding of feet racing his way from the other end of the porch that caught his attention. A tall man in a suit with raven-black hair and a stern expression was racing to him. Wow. Gorgeous. He was simply gorgeous.

So gorgeous in fact, that it took Hale an extra second to realize the man had a gun in each hand.

Fuck! He was only starting to swing the gun toward the man when he fired off several shots right past Hale. The Air Weaver spun to see the bullets hit their marks in three pestilents, killing them instantly.

The stranger saved him. What the—

“What are you doing out here if you don’t know how to protect yourself?” the gorgeous man shouted.

Hale took a breath to say something, but he wasn’t quite sure what. His brain wasn’t working, and his tongue was all tied up. He was overwhelmed. He generally wasn’t the type of person who got overwhelmed, but that described him in the middle of the bloody chaos.

Which was probably why it was so easy for the man to holster one of the guns, grab his wrist, and pull him back into the house.

Hale stumbled after him, trying to get his brain to process the events happening. The man turned toward the left but only glanced in the dining room before sneering at something and moving to the right. He made the same face when he peered into the library.

“Too many damn windows.” Twisting to face Hale, he jerked his arm as if trying to get his attention, but the stranger had all of Hale’s available brain capacity at this point. “What room doesn’t have a lot of doors or windows?”

Well, there was the downstairs half bath that had no windows, but there was no way he was getting shoved into that room, with or without the sexy man.

“The-the armory has no windows and only two doors,” he stammered at first, but finished, proud that he’d clearly remembered the room.

The stranger blinked, seeming surprised to hear the house had an honest-to-goddess armory, but he recovered fast enough. “Good. Take me there.”

Hale hesitated and sniffed the air. “You’re not a pestilent.”

The man gasped, looking appropriately horrified. “Of course not!” Well, that was a plus for him. Not only was he human, but he also knew what a pestilent was.

“Then who the hell are you?” Hale had already met all the Weavers, mates, and goddesses. He couldn’t even begin to guess who this handsome yet scary person was.

“A friend of the Weavers. The goddesses sent for me. Now, the armory? Where is it?”

Oh! That was much better. The guys had never mentioned the goddesses sending in more help, but they certainly needed it.

Hale took the lead, hurrying down the hall toward the armory. There was one main entrance to the room and a set of narrow French doors that connected to the front porch. That made the space much easier to protect.

The man’s quick dark eyes darted across the long table filled with weapons. He released Hale only when he had his back shoved against a bookcase in the far corner that gave him a good view of both doors. The man then moved to the French doors and peered out between the thin white curtains.

“Which of them are you?” the man inquired.

The stranger’s head slowly turned toward Hale. His eyes were wide, and his face had become incredibly pale. The bloodbath outside had not disturbed him, but something about what Hale had said had clearly shaken him.

“It’s true,” he whispered. “The Weavers Circle is finally complete.” 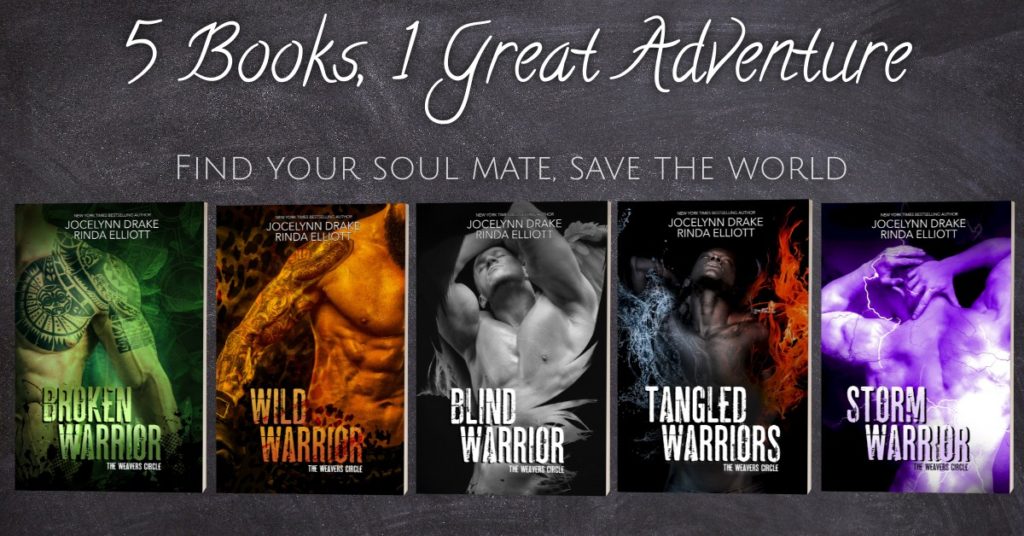