Every person is born with a line of luck on their arm that they can spend to bribe fate in their favor. Spend it wisely and the doors to success will open. Spend it foolishly and you’ll be shunned as a reckless blank-arm.

At age twenty-three, Helena has never spent a single inch of luck, for fear of ending up like her gambling brother. She’s never needed luck though. So far, her life has unfolded perfectly as planned, with her plush apartment, prestigious job, and parental approval. But then Helena develops inconvenient feelings for the mysterious, blank-armed Nadia who works in the office next door.

Nadia is brilliant and confident and absolutely hiding something. Helena wants to love her, but she has a hard time trusting someone whose priorities are so different from her own. Can Helena make this relationship work, or will she rue the day she took a risk on romance?

When Helena was eleven years old, she watched her older brother burn his entire luck line.

She’d recently come home from boarding school for the summer. Her parents were busy on a work trip, much to her disappointment, so Michael was the only person around to babysit her. One day, while Helena was lounging around the house in a puddle of self-pity, Michael asked if she wanted to go see some ponies.

Of course, she’d said yes—she was an eleven-year-old with a dozen cowgirl posters in her dorm room. And, of course, there had been a catch—her brother was a recently graduated eighteen-year-old with his own car. He wouldn’t take Helena anywhere unless he absolutely had to.

“This isn’t a farm, Mikey,” Helena said accusingly. A proper stable would be a cute wooden shed beside a grassy valley where the horses could frolic and graze. This place was an ugly yellow box squatting in an endless parking lot.

“I said we were going to watch horses. I didn’t say from what distance. Don’t complain.”

As they approached the building, the thick scent of manure grew stronger, and a racket of clapping and shouting bled out of the walls. Her brother dragged her through a crowd of sweaty adults to the ticket counter inside.

A bored teller glanced at the pair: first Helena, with her tight braid and glitter jeans, then Michael, with his long bangs and baggy T-shirt. The man drawled, “Sorry, kids. We can’t take bets from minors.”

“I’m eighteen. And she’s not betting.” Michael opened his wallet to reveal a wad of twenty-dollar bills. How many allowances had he saved to get that much? “Race number twenty-three, two hundred dollars to win on Gravy.”

“Bold choice.” The teller slid Michael a form. “You understand the rules, yeah? You’re allowed to spend as much of your luck line as you want, but—”

“You’re not liable for anything. I know, I know.” Her brother signed the paper, grabbed his ticket, and led Helena to the bleachers.

Since it was a weekday, there were barely a hundred people in the stands, so the siblings had most of the row to themselves. Helena and Michael looked through the list of horses on his ticket. Gravy was scheduled for the next race.

Gravy did not look like a winner. He had a brindle coat with sickly gray spots. Helena pitied the poor horse as he was trotted to the starting line.

She was so busy worrying about the horses that she almost didn’t see her brother roll up his left sleeve. His luck line’s crimson hue contrasted sharply with his skin. It started at his wrist bone, then curled round and round the arm until it reached his elbow.

Like Helena, Michael still had all twenty inches of line he’d received at birth. But her line coiled tightly to squeeze itself within her forearm, while his line had stretched out with him during puberty. Michael slowly traced the length of his luck line with a forefinger, never letting his skin break contact.

Unease shivered up her neck. “Mikey, what are you doing?”

“A dumpy horse like that needs some help if he’s going to win.”

A gun went off. The horses galloped forward. Michael nudged his forefinger an inch up his arm. The bright-red mark faded into his skin. Gravy pushed his way to the front until he was head-to-head with a black horse named Lotus.

“But Mom and Dad say we’re only supposed to spend our luck line for important things, like college or job interviews or—”

“I need the money,” Michael snapped. He burned another inch of luck line to push Gravy into the lead.

“Why?” When her brother didn’t answer, she took her cell phone out of her purse. “Tell me why or I’m calling Mom and Dad.”

Michael winced. Helena would follow through on her threat, and they both knew it. “I…Iris is having a baby.”

Helena gasped. Michael’s girlfriend was the one who had bought Helena her first grown-up paint set. She was quiet and bookish and had a scholarship to Dunestown University. Why would she ruin her future by getting pregnant now? Helena could understand Michael screwing up, but Iris was supposed to be the responsible one.

A wave of cheers rolled through the stadium as a horse called Duke took the lead. The cream stallion cut in front of the competition. His tail flicked Gravy in the face.

Michael grimaced. “How? Two inches should be more than enough to win at this trash heap of a track.”

“Duke! Duke! Duke!” Six men stood up from their seats a couple of rows down. They held their left arms above their heads, showing off to the crowd as they burned through their luck lines in unison. Individually, their luck lines were embarrassingly short, barely three inches each. But if all six of them were pulling fate in Duke’s favor…

“Damn it, they must be planning to split the winnings.” Michael dug his finger into his skin and pushed down the line.

“Mikey, it’s not worth it!” Helena tried to pull his finger off the line. He elbowed her away. She watched in horror as he burned through four inches, eight inches, sixteen inches. Soon an entire lifetime of luck was gone.

Down on the track, Duke stumbled over a rock. The poor horse tumbled onto his side, spilling the jockey off his saddle. As Duke picked himself up, Gravy raced into the lead. He curved around the track, sprinting toward the finish line.

Gravy only had twenty feet to go when Lotus barreled past him to victory.

“No!” Michael fell to the filthy stadium floor. He took his finger off his skin to see the damage. His expression made it clear he’d burned more than he’d planned. He took his palm and rubbed his arm, as if he could somehow undo his mistake. “No, no, no…”

An elderly couple strutted up the stairs. The husband and wife each held the corner of a ticket. They carried the paper like it was a fragile gemstone. It wasn’t unusual for elderly people to be blank-armed, but Helena suspected the couple had burned their luck lines rather recently. Someone must have bet on Lotus, after all.

Michael sobbed by her feet. Helena felt bad for her brother, but at the same time, she had warned him. Now he’d lost two hundred dollars and his luck line with nothing to show for it.

Helena looked down at her own arm. Her luck line was still red and untouched—she wouldn’t be able to activate it until puberty—but it felt warm, as if all the luck burning around her would catch her arm on fire. She rolled down her jacket sleeves and put as much space between herself and her brother as she could. 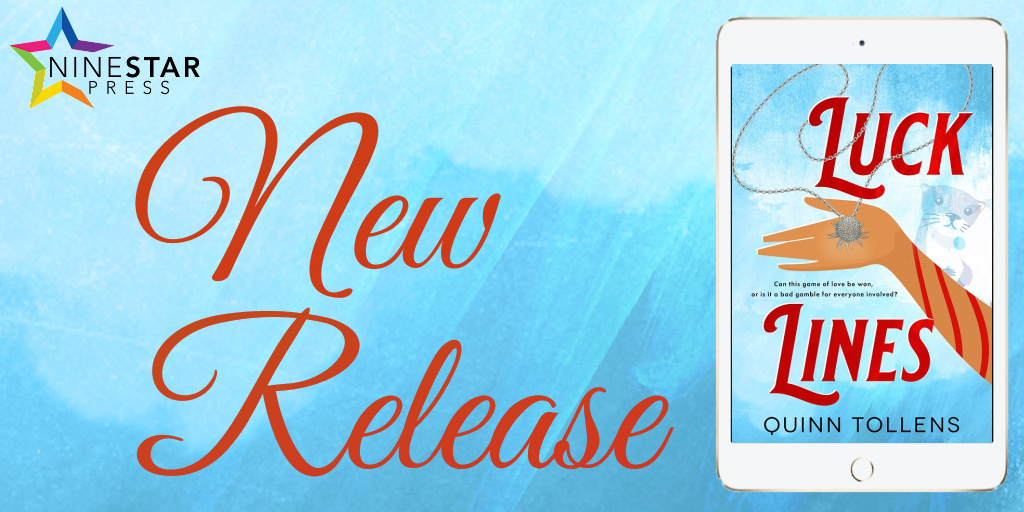 Quinn Tollens lives in the land of corn, cows, and tornados. They started writing romance as a distraction from the doom and gloom of quarantine and forgot to stop. Quinn’s day job revolves around science, and so when they write, their imagination refuses to obey the laws of physics, biology, or common sense.