Kazimir Lebedez is a shocking anomaly in Russian politics. He’s an honest man who can’t be bought. Because he has no secrets. Until an extramarital love affair results in an illegitimate son he decides to hide in plain sight.

Raised by his adopted grandmother, Misha Vergara has dreamed of dancing ballet since he was a toddler. He exhibits the natural grace and drive to succeed in the competitive world of classical dance.

Natalya Baranova—Talia—is convinced that she and her bestie, Misha, are destined to be the preeminent ballet couple someday. They work diligently on their craft which ultimately leads them to the Mariinsky Theater in St. Petersburg, Russia.

Henri Minas, a new arrival, has all the qualifications to become a principal dancer, with a face and personality that beguiles and confuses Misha.

Torn between his best friend and Henri, Misha must come to terms with his growing feelings for another boy. In a region of the world where same-sex relationships are forbidden, will Misha follow his heart and choose love with Henri, or stay true to Talia and their shared dream of fame?

To make matter’s worse, all of Kazimir’s carefully crafted lies are about to unravel, as the half brother Misha doesn’t know sets his sights on Talia. Now a high-ranking member of the government, can Kaz protect his reputation, and more importantly, his precious love child, without losing it all?

A week later, my good intentions turned to shit.

The playful pas de deux between Alice and the Knave of Hearts was one of our favorite parts of the ballet. Unlike the original story, featuring a childish Alice, Christopher Wheeldon had crafted his masterpiece with a teenage Alice on the brink of her first romance. Talia was off her game during last night’s performance, so we decided an extra hour of practice was warranted. Thirty minutes in, I realized it wasn’t her technical skills that were subpar—it was the emotion. Even our principal yelled for her to stop.

“Talia, sweetheart. What is the problem?”

She blinked owlishly. “Did I do something wrong?”

“Not at all. Your balançoire was phenomenal, as are Misha’s lifts, but you’re projecting tragedy instead of happiness. I’m seeing Manon in her death throes instead of a young girl in love for the first time. Are you and Misha okay?”

Ignoring me, the principal prodded Talia, “Is he right?”

“Of course,” Talia assured him. “There’s no trouble between us.”

“Then you must be in pain. Was there an injury you haven’t reported?”

“Are you eating enough? You seem to have lost weight.”

“Then let’s take it from the top, and this time, I want to see your face light up with joy when Misha first approaches.”

“Tashinka,” he said in a kinder tone, “don’t make this more difficult than necessary. Show us how much you love your partner.”

“I’ve never tried to hide it.”

“Then you don’t even have to pretend. I expect heart-eyes all the way through.”

Our next attempt was much better. I was the only one who could tell Talia was still struggling to put her best foot forward, but we flirted on cue, and her arabesques had never been better. Even our demanding teacher let us go after one run.

“Get out of here and do something fun.”

An entire day to mess around was an unexpected bonus, and my first thought was escape. “How about a picnic at the Sosnovka?”

Her face lit up. “Are you serious?”

“It’s warm enough, according to my weather app. Let’s ask Henri to come along.”

I froze. This would have been the perfect occasion to clear the air and mention I had feelings for both of them. “Why not? This way you can show him there are no hard feelings between you guys.”

She shook her head. “We’ve already talked about it, Misha. It’s just… we’re hardly ever alone.”

I wanted to protest, but I was fresh out of arguments. I’d have to tackle the problem on another occasion. “Okay, it’ll be like old times. You, me, and Mother Nature. Let’s stop at the deli for drinks and sandwiches.”

The sun was shining as predicted, and temperatures were still warm enough for shorts. Talia insisted we stop at the Garage Café for some iced coffees, and I didn’t object. Our attendant was familiar, but I couldn’t place her until she asked, “Where’s your friend?”

Then I remembered. The last time I was at her counter, was the afternoon I’d spent with Henri. She’d openly admired him, which was par for the course whenever he was around. He routinely stole my thunder without even trying. But it was impossible to resent him because one of his best attributes was humility. There were other dancers, far less attractive, who were legends in their own minds.

“What does he do?” she asked while she prepared our drinks.

“Tell him I said hello.”

“Remind him that I’m the barista who attended to him last time.”

“I’ll mention it when I see him later.”

We decided to take the metro to save time, and once we were settled, Talia brought up the subject of the starstruck girl behind the counter. “When were you and Henri at the café?”

I threw out a date, hoping she wouldn’t ask for details. The last thing I needed right then was more drama. Confrontations were my least favorite thing in the world, and I never seemed to win an argument whenever it involved Talia.

“Henri must have made quite the impression on that poor girl.”

“You can’t tell he’s into guys at a glance.”

“Says you,” Talia scoffed. “Everyone and his mother knows he’s a poof.”

Here we go again… “Maybe she was struck dumb by his good looks,” I offered. “The guy is genetically blessed.”

Talia laughed. “He is a handsome devil.” 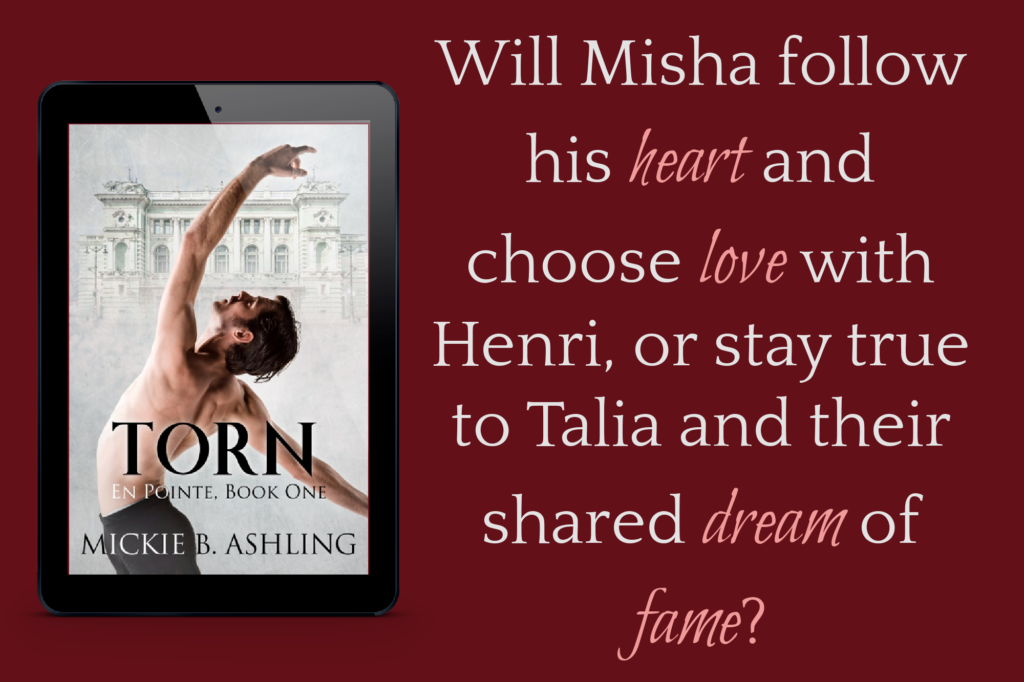 MICKIE B. ASHLING is the pseudonym of a multi-published author who resides in a suburb outside Chicago. She is a product of her upbringing in various cultures, having lived in Japan, the Philippines, Spain, and the Middle East. Fluent in three languages, she’s a citizen of the world and an interesting mixture of East and West.

Since 2009, Mickie has written several dozen novels in the LGBTQ+ genre—which have been translated into French, Italian, Spanish, and German. Some of her backlist is still “Under Construction” as she slowly transitions from traditional publishing to representing herself. Her goal is to have most of her novels back in the universe by the end of 2022. Audiobooks and foreign translations are still available at Amazon and Audible.