Private detective Terry Luvello has just been handed the biggest case of his career. During confession, a man has twice declared his intent to commit murder. In both cases, the murders later occurred in exactly the way the unknown man had described.

Hoping to keep the church connection out of the newspapers, the parish pastor asks Terry to find the killer and act as his liaison with the Cleveland Police and Detective Hannah Page. While dealing with their own growing attraction, Terry and Hannah race from Cleveland to New Orleans to catch a brilliant and ruthless killer acting on his own twisted compulsion.

Those who know Terry describe him as intelligent, obsessive, and annoying, often all at once. To solve this case, Terry must also put his uniquely wry sense of humor into play, coming to terms with a longstanding grudge against the Catholic Church and his identity as a transgender male.

Amos Johnson was an enforcer. A triggerman for the Cleveland mob, Amos stood six-foot-four with the physique and ornery nature of a habitual steroid user. His body was his business, and Amos took his business seriously.

Amos also loved tattoos. Known as “Tatts” to his friends, Amos proudly claimed to have visited every tattoo parlor in the city of Cleveland. Fully covered from head to toe, the design on his left forearm was a tribute to his mother.

Amos’s other tattoos, not nearly as sentimental, would get him thrown out of any polite gathering in the city. That assumed, of course, someone would be foolhardy enough to try.

Not being part of polite society myself, Amos and his tattoos didn’t bother me at all. We shared the same opinion about the Browns, blues music, and the current state of the movie industry. With the people I met in my business, that was pretty much the best you could hope for. Amos might not have understood me, but he was at least willing to make the effort.

I met Amos almost a year ago during a custody dispute with his ex-wife. His ex, a heroin addict, had run off with Amos’s two-year-old daughter, Leann. It wasn’t that Amos thought he should take care of his daughter—he knew he wasn’t cut out for parenthood any more than his ex-wife. Amos’s goal instead was to return Leann to the person who really did have custody, his beloved mother, Amelia. He hired me, a licensed private investigator, to make that reunion happen.

After a lucky break, I was able to return Leann to her grandmother within two days of her abduction. Amos was grateful, but he couldn’t pay me much. That was pretty much an occupational hazard, though Amos promised he would be forever in my debt. One year later, that was a marker I needed to call.

My old-school mother would call Amos a thug. I didn’t care if Amos was a thug because tonight, he was my thug. Bored and uncomfortable, Amos and I were crouched behind a car on the fifth floor of the main student parking garage at Creesmont College, a small liberal arts school about twenty miles outside of Greater Cleveland.

As colleges go, Creesmont wasn’t much. Its history department was rated as one of the top thirty programs for schools of its size, and that was about it for high-level academics at the college. In a move born of desperation, Creesmont administration decided to take advantage of the school’s low academic reputation by investing more in athletics. That bet had paid off, and the school’s football team currently ranked in the top five of Division Three schools across the country.

Amos and I were waiting to meet James O’Keefe. Considered a potential low-round pick in the next NFL draft, O’Keefe was the senior quarterback of this year’s Creesmont football team. Six-foot-three, movie-star handsome and outwardly friendly, he was every girl’s dream date. Unfortunately for those girls, James preferred rape to relationships.

My client, Jenna Adamcheck, was a third-year English major at Creesmont. To earn extra money, Jenna had signed up as a tutor for the Creesmont Athletic Program, and her first client was James O’Keefe.

With a long-term boyfriend at another school, Jenna had little interest in James’s early attempts at seduction. Her indifference only piqued James’s interest, and Jenna was surprised two weeks into their arrangement when James showed up at her dorm room requesting an unscheduled tutoring session. Jenna reluctantly allowed James into her room, where he then continued his courtship by pushing Jenna onto her bed and ripping off her sweater top.

Jenna was no shrinking violet. Taught by her father to always fight back, she aimed a well-placed knee at James’s crotch. The knee connected, and James, now in considerable pain, fought to regain the upper hand.

Jenna, however, was not through. Furious, she grabbed the fork she was using for dinner and aimed it at James’s left eye. While she missed, the fork drew blood as it gashed her assailant’s left cheek. Unsure how to deal with a woman who hit back, James ran from Jenna’s room. Cursing and in pain, he plotted his revenge.

Thinking she had resolved the incident, Jenna didn’t report James to Creesmont administration. That was a mistake; although, it did initially appear James had backed off.

Three days later, Jenna found the windshield of her 2018 Kia Forte smashed and a typewritten note placed on the driver’s seat. The message read, “Sluts always pay in the end.” Alarmed, Jenna reported the incident to campus police along with her suspicions as to the culprit. Without evidence, those suspicions were promptly ignored. 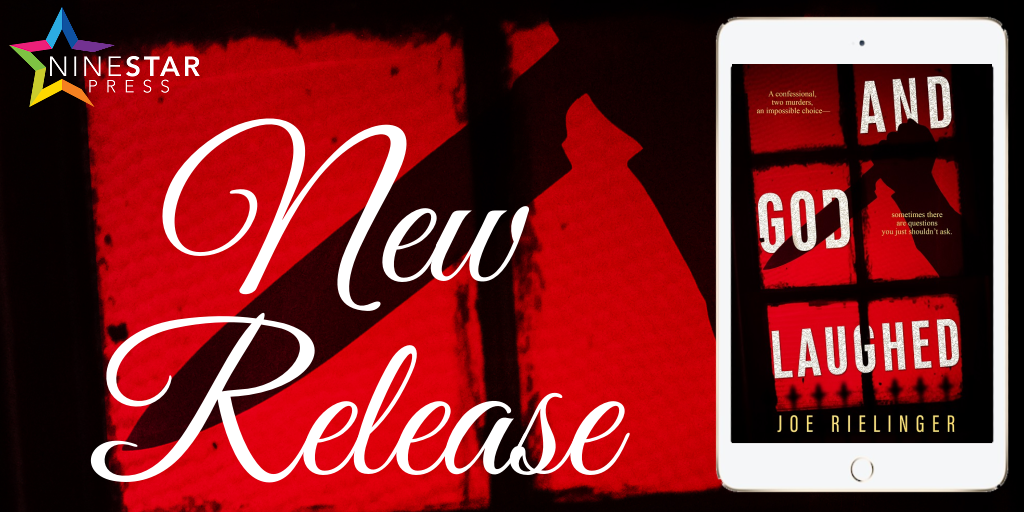 Joe Rielinger lives in Cleveland, Ohio, with his wife, Lisa, and their two fun-loving, though often borderline crazy golden retrievers. With a lifetime love of mystery, crime, and detective novels, Joe is currently working on a sequel to his first book, And God Laughed. When he isn’t writing, Joe likes to cook, read, and pretend he might someday learn something about training his two dogs.