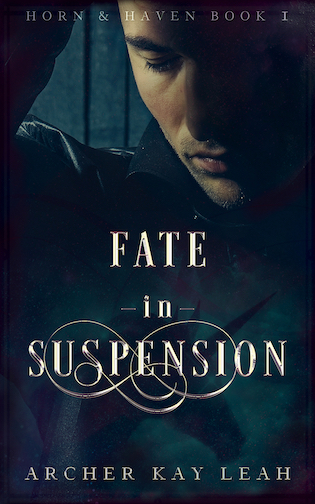 Quiet. That’s how he likes life, no drama to clean up…

Tai Xen-Vorsy leads a straightforward life: work, time at the local clubs where shapeshifters like him can play without fear, and the comforts of home with a cat that’s more than half attitude. After breaking up with his last submissive, he’s even taking a break from Dom duties.

Meeting Gates changes everything, and when Tai’s childhood home is destroyed, his simple life goes up in flames.

The Callensdale haven was his refuge as an orphan, a hideaway that saved his life. Now it’s time to return the favour. Bringing in the Fluff Brigade Brotherhood would make all the difference… if he could just get them back together. Tai won’t give up—he’s not that kind of unicorn. But can he reunite the brotherhood and keep his new relationship with Gates kindled at the same time?

The darkness is dragging him into the shadows, one case at a time…

Helping others is all Gates Colfaethe wants to do, being mostly unicorn shifter with a splash of Faerie. But years as an agent on trafficking cases leave him fearing just how far he’ll lose himself in the job before he burns out completely.

A random hookup with Tai might be the very change he needs. A new Dom means new rules and the chance to create safe distance from work—until his worlds collide in a twist Gates should leave well enough alone. What he knows is bad enough, but running headlong into danger could kill him.

Horn & Haven is an MM+ romance series featuring a found family of unicorn shifters brought together by tragic circumstances. Friends out to save a magical world in trouble. Family fighting to protect those they love. Lovers falling for the kinkiest unicorns this side of their universe… Welcome to the Fluff Brigade Brotherhood.

Fate in Suspension Excerpt 1: The Call

Terror shot through him, competing with a simmering rage like twin blasts of hot and cold tearing each other’s throats out. He hadn’t been this scared since he’d seen his parents murdered.

Ratchet. Need to tell him.

He turned off the taps and dried his hands, then returned to the bedroom. Gates hadn’t left the bed, only turned over to lie on his stomach, face turned away from the bathroom, all of which suited Tai just fine. He wasn’t up for explaining. Gates wouldn’t understand anyway, so what was the point?

Tai opened the closet as quietly as he could and grabbed his phone from his jacket.

“Problem?” Gates’s voice drifted over from the bed, soft and sleepy.

“No,” Tai answered through gritted teeth, unable to look at Gates. “Go back to resting. I’ll be back soon.” He stepped into the hallway and closed the door behind him. The moment he was alone, he called Ratchet.

“Dammit,” Tai muttered. Ratchet was most likely passed out at home, sneaking in a quick nap since he’d be up early to deal with event matters. Either that or his phone was dead.

It was just as well—Tai didn’t want to discuss anything over the phone. Not when he didn’t know who was listening in. He wasn’t a complete fool: after the dragon sighting, all sorts of agents would be up to their dicks in surveillance, especially in the city where it all went wrong.

The chime of Ratchet’s voicemail pissed him off even more as he left his message. “Hey, asshat,” Tai said, “thanks for not picking up. Need to see you, basically fucking now. It’s almost three—wake your ass up and text me. I’ll keep harassing you till you do.

He hung up, only to text Ratchet the same message. Everything else was just a matter of waiting.

Molly Rey had told him to stay. That he had time.

None of that made him feel better. The Callensdale haven had been their home for years, ever since he and Molly Rey had been whisked away to the haven’s veiled location, hidden from whoever had killed their parents. They’d shown up on the haven’s doorstep as bundles of paranoia and horror but left as mostly adjusted adults ready to see what the world offered, other than secrets. Between the Eightfold Watchers and the patron guardians, they’d never had reason to fear life on the haven’s grounds. They’d been raised well. With care. Just as every child of the Dale was.

Now that compassion and kindness had been devastated, and for what?

Tai scowled at his phone, thumb poised over the Message button. He should go to Ratchet’s place and bang down the door until someone let him in, except…

Tai had gone rough enough on him. He wanted Gates to rest it off, at least for a little while, and he didn’t need anyone else knowing his business.

His fucking head. He wasn’t fit to go anywhere, let alone drive. His insides felt as if someone had gone full-on supernova on his brain matter, then redecorated his skull with a sledgehammer. His sight was blurry and getting worse the longer he stared at his phone, details bleeding together—a reaction to the magic he’d completely forgotten about. If it was anything like when he was a child, the blurriness would last for at least an hour, maybe longer since he hadn’t worked mirror magic in over twenty years. Molly Rey had always been the strongest at their shared ability, not him.

No, leaving the apartment was a bad idea, likely to get him killed with a fate far worse than what Molly Rey would deal out if he didn’t obey her instructions, even if loyalty demanded he run to her. Staying put was already making his skin crawl.

Tai sighed and headed for the kitchen—

—Only to hit the ground, knee slamming down before he could stop himself from falling. His other leg buckled just as quickly, bringing him face-first against the wood floor.

Rolling onto his back, Tai hissed at the contact on his spine. He called Ratchet from where he lay in the corridor.

“Change in plans,” Tai said in his new message. He stared at the ceiling, waiting for the doubled shadows to stop dancing. “Meet you at the club at eight. Morning eight. Have coffee.”

He let the phone slip to the floor by his ear, the clatter too loud to not wince at. Fine, if his body didn’t want to move, he’d lie there for a bit, then try to get up and hobble back to bed, assuming Gates didn’t find him first—or Estrel didn’t sit on his face. The thud and click, click, click coming from the other room meant the furry bastard was already on the way, probably to loaf on Tai’s chest and smack his tail in Tai’s face, knowing Tai wasn’t in any condition to stop him. 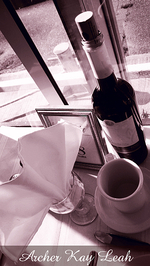 Archer Kay Leah is an LGTBQA+ romance author that you’ll often find getting lost in strange, fantastical worlds with characters who can’t help but find trouble and shake things up. Fantasy and sci-fi romances are Archer’s speciality, especially when they’re complex and emotionally charged. But at the heart of Archer’s stories are friendship, family, and there’s always a happy ending–it might just take a whole lot of complications to get there!

When not reading and writing for work or play, Archer is a nerd of much geekery, loves music to depths that will never be contained, and is fascinated by behaviour, psychology, and ecology. Born and raised in Canada, Archer lives in London, Ontario with a non-binary partner who loves all things out there in the vast space of the universe.

Welcome to our #BookTour to celebrate the release of Emissary by @ALMorrowAuthor⁠
👀 𝗜𝗻 𝘁𝗵𝗲 𝗺𝗼𝗼𝗱 𝗳𝗼𝗿 𝘀𝗼𝗺𝗲 𝗣𝗶𝗻𝗶𝗻𝗴 𝗮𝗻𝗱 𝗣𝗼𝘄𝗲𝗿 𝗗𝘆𝗻𝗮𝗺𝗶𝗰𝘀? 👀⁠
𝐂𝐚𝐧 𝐦𝐲 𝐨𝐧𝐥𝐢𝐧𝐞 𝐜𝐫𝐮𝐬𝐡 𝐫𝐞𝐚𝐥𝐥𝐲 𝐛𝐞 𝐭𝐡𝐞 𝐠𝐮𝐲 𝐧𝐞𝐱𝐭 𝐝𝐨𝐨𝐫?⁠
Come join us for a brand new age gap romance and Book 1 in F.A. Ray's new Rock Jocks Series!⁠
Welcome to the #Audio #BookSpotlight to celebrate the #Audiobook release of On A Midnight Clear by @LilyMortonAuthor⁠
Is it possible that Tavish’s fender-bender on a snowy day will lead to him getting romantically rear-ended? ⁠
%d bloggers like this: