Kings of the Mountain, Book 2

Three deadly accidents that might have been magical murder. A dark witch with a grudge against the King family. Federal agents with supernatural abilities. And, as usual, Dawson and Grady are smack dab in the crosshairs of trouble even they can’t outrun.

When Grady King’s brother Knox is targeted by shady characters, old secrets, coverups, and lies come to light. Grady and his boyfriend Dawson begin to question what really happened when Grady’s grandparents and Dawson’s parents died. Then agents with the Tennessee Bureau of Supernatural Investigation show up pursuing a different case, only to discover that the crimes appear to be connected, with a vengeful dark witch at the center of the plot. And since monsters never sleep, Grady and Dawson are still carrying out their duty to hunt dangerous paranormal creatures, restless spirits, nefarious faeries, Civil War ghosts, creepy cryptids, and things that go bump in the night. It’s all part of the centuries-old King family mandate to protect the people of Cunanoon Mountain and Transylvania County, a mission Grady and Dawson are sworn to fulfill.

But when it looks like something is hunting the people Grady loves, it’s time to dig into the family’s painful past, uncovering dangerous details of long-ago hunts against immortal creatures who never forget—or forgive.

Can they solve the mystery and figure out who’s behind the deaths, or will they bear the deadly consequences of their hidden history? Reckoning with the past just might destroy Grady and Dawson’s plans for the future and set loose a tide of malicious magic that could sweep them all away.

Sins of the Fathers is a thrill-packed MM romance adventure full of fast cars, outlaw country boys, snarky werewolves, vengeful ghosts, menacing monsters, and a love that can’t be denied. Join us over on Instagram for more of Sins Of The Father!

You can also enter the giveaway on our Instagram post or click here for your chance to win an e-copy of your choice from Morgan or Gail’s backlist! “I think Lily left out some information,” Dawson King yelled as he ducked a flying paperback book thrown by an invisible attacker. His breath misted in the frigid air, a sure sign a spirit was nearby.
“Ya think?” Grady King, Dawson’s “step-cousin” and partner, replied as the EMF meter shrilled, indicating the presence of a strong—and pissed off—ghost.
“Fuck,” Dawson muttered as he tried to move from where he’d taken shelter behind the couch, only to narrowly miss being hit by a coffee mug. It hit the wall and shattered with a crack.
They had hoped to deal with the ghost of Jason Carter peacefully.
Jason seemed to have other ideas.
“Jason Carter! We want to talk!” Dawson shouted.
Two magazines and the TV remote flew off the coffee table to land in the middle of the living room floor.
When Lily said the ghost made her feel “unwelcome,” she didn’t mention an all-out attack.
“It’s about Everett!” Dawson yelled, hoping the spirit had enough sense of self to hear and understand.
The room became quiet, although it remained freezer-cold.
Dawson and Grady rose slowly from where they had dived for cover. Dawson had a sawed-off shotgun he hoped he didn’t have to use, while Grady carried a bag with salt, holy water, and other items to handle a restless ghost. Grady took out a Ouija board and planchette, setting them on the kitchen table.
“We know you cared about Everett. And we know you saw him get sick. Everett had a stroke. He’s alive but weak. The doctors don’t think he’ll be able to come home.”
A gust of wind sent a glass flying from where it had been on the table. The planchette skidded across the board to stop on “NO.”
Dawson’s heart went out to Jason, worried about his long-time partner without news of how he was doing and now afraid of being left alone. Check out Book 1 in the
Kings Of The Mountain Series

Dawson King’s family has been hunting things that go bump in the night in Transylvania County, North Carolina, since before the Revolutionary War.

Dawson was never happier than when he was racing his souped-up Mustang along winding mountain roads and hunting monsters with his best friend, Grady. Then Grady fell in love with him, which should have been perfect since Dawson had already fallen hard for Grady.

But Grady was only seventeen, and Dawson feared that sooner or later, Grady would realize his feelings were just a first crush, and then he’d be gone, leaving Dawson devastated. They both needed space to figure things out. So Dawson joined the army, while Grady stayed on the mountain.

Four years later, Dawson is coming home. He’s more sure than ever Grady is his forever love, and they’ve both agreed to begin this new aspect of their relationship as soon as Dawson gets back.

Then Grady’s father is killed in a werewolf hunt gone wrong. Grady is devastated, and he’s throwing mixed signals about moving forward. Dawson knows he needs to hold off on this new thing between them until Grady has time to grieve. But monsters never sleep, and one hunt after another throws Dawson and Grady into constant danger, while tension and unresolved feelings ripple between them.

Making it even harder, Dawson’s got a secret. He’s dreamed of death omens—which point to something stalking Grady. Can Dawson figure out who’s trying to kill Grady, save his life, and win back his heart?

Plenty of mutual pining, hurt/comfort, spooky chills, sexy thrills, and a very happy ending. The Kings of the Mountain is the first novel in the series. It is a MM romance intended for readers 18 years of age and older. 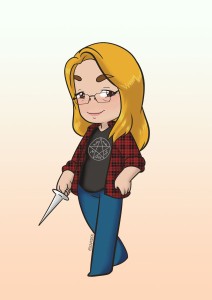 Morgan Brice is the romance pen name of bestselling author Gail Z. Martin. Morgan writes urban fantasy male/male paranormal romance, with plenty of action, adventure and supernatural thrills to go with the happily ever after. Gail writes epic fantasy and urban fantasy, and together with co-author hubby Larry N. Martin, steampunk and comedic horror, all of which have less romance, more explosions. Characters from her Gail books make frequent appearances in secondary roles in her Morgan books, and vice versa.

Series include Witchbane, Badlands, Treasure Trail, Kings of the Mountain and Fox Hollow. Watch for more in these series, plus new series coming soon!