Aron:
I’ve always known Wyatt was hot, but scotch and half a bottle of tequila makes him so Goddamn beautiful.
After my last disastrous relationship with a close friend, you’d think I’d learn my lesson and choose someone else for a rebound. Someone I don’t have a solid friendship with.
I should definitely stay away from Wyatt. But when have I ever listened to logic?

Wyatt:
I’d long forgotten my college crush on Aron. He was never a possibility, having friend-zoned me from the beginning. But now he’s drunk and looking for a rebound.
It’d totally ruin our almost decade-long friendship. I have to say no and be the bigger person … right?

*Rebound is a 17,000 word short story that belongs to the Fake Boyfriend series but does not contain a fake boyfriend trope. While it can be read as a standalone, it’s recommended to be read in companion with the series.*

Aww, all the feels – that was just wonderful!!

I love Aron and Wyatt! They made great secondary characters and I’m so glad Eden decided on sharing their love story for this Novella. I enjoyed the little taste of their journey and felt Eden did a great job in setting the scene, the character dynamics and the condensed storyline with so few words. I felt all the emotions with Aron and Wyatt and enjoyed ‘watching’ then grow and find love with each other. I look forward to continued cameos of Aron and Wyatt in more of the Fake Boyfriend stories! 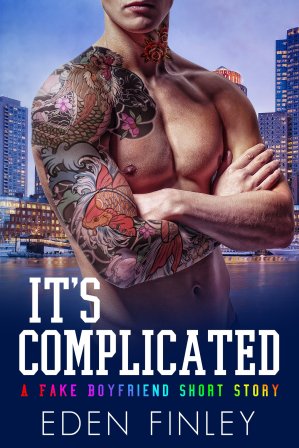 Max has been in love with his childhood best friend, Ash, for years. The reason he has kept it a secret is because Ash also happens to be Max’s brother’s ex-boyfriend. Complicated doesn’t begin to explain their relationship.

Best read after Deke in the Fake Boyfriend universe.

Aw, my heart! I loved Max and Ash! A fantastic best-friend to lovers (soul mates) tale!!!!

Eden does this story with so much care! I loved the progress and honesty between Max and Ash as well as their honesty, trust, and respect for Ollie and how he would feel about everything. I’m sure Max’s family will continue to have a field day with this for a very long time but it’s so evident that the family is so full of love it won’t matter.

I truly loved this and highly recommend this collection and Eden’s entire Fake Boyfriend Series!! 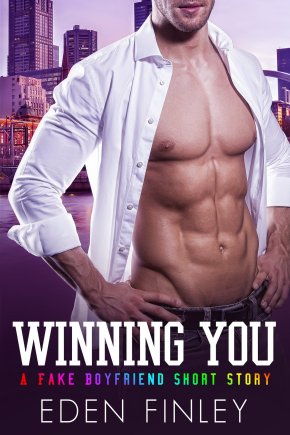 (Previously published in Heart2Heart volume 2. This story has been extended from the original and re-edited.)

Marty and Luce win a blind date through a charity raffle. Marty is young and vibrant. Luce is older and a little bit bitter. In one night, they manage to change the course of each other’s lives.

This is a prequel of Hat Trick in the Fake Boyfriend universe.

A fantastic collection from Eden!!

Soren:
You know what’s not fun? Going on a Fiji vacation with four other couples. Especially when recently single.
What’s even worse is when a past hook-up arrives unannounced.
Not only do we have a history, but he’s ten years younger and a famous rock star. Most importantly, he’s my friend’s little brother.
Being trapped on an island with Jet Jackson is going to be sweet torture because all I want is another chance.
I just don’t think he’s going to give it to me.

Jet:
You know what’s not fun? Escaping one guy who broke my heart only to run into another.
Being on the road for three years has left me exhausted. The last thing I want is for Caleb ‘Soren’ Sorensen to try for round two.
I can’t fight my draw to him. I’ve never been able to.
I’m suddenly back to being the naïve kid who stupidly lusted after a hockey player.
All I can think is if I let Soren get close, I’ll walk away from this vacation with a double broken heart.

Hat Trick is a full-length M/M romance with a guaranteed HEA. This is the final book in the Fake Boyfriend series and as such is not recommended to be read as a standalone. All main characters of the series feature heavily.

With a short attention span that rivals her five-year-old son’s, she writes multiple different pairings: MM, MMF, and MF.