They say it’s a bad idea to fall for your best friend. But since when do I say no to bad ideas?
Adam: It’s not like I wanted to fall in love with Ben. When we first met in college, I thought he’d be like every other hot jock who’d made my life hell in high school. It’s not my fault he turned out to be sweet, funny, and insanely talented. We moved to New York after college to break into the music business and of course Ben got signed by a major label—they’d be stupid not to want him. But even though he’s a famous popstar now, he still wants to be friends with a nobody like me. Honestly, if he didn’t want me falling for him, he should have been less goddamn perfect.

Well, except for the part where he’s straight. Did I forget to mention that?

In my defense, responsible decision-making has never been my strong suit. Case in point—collapsing on stage, guitar in hand, after discovering my then-boyfriend, now-ex was cheating on me, and downing a bottle of bourbon in response. But I’m cleaning up my act—no more hiding in the closet and no more bad life choices. But that also means no more waiting around for the day Ben magically decides he likes di…sgustingly sappy guys with secret crushes on him (aka me).

So why did Ben have to pick now to make me question everything I thought I knew about us?

“I’ve never wanted anything as much as I want you right now. When I see you, something inside me lights up.”

Ben: It’s not like I planned this. I was on tour when Adam collapsed back in New York and he wouldn’t even let me come home early to visit him. But that’s Adam for you—brilliant, breathtaking, and pathologically afraid of vulnerability. All I wanted was to be there for him—and him coming out didn’t change that in the slightest. Yeah, I couldn’t help seeing him a little differently. And no, I couldn’t quite explain why I was suddenly noticing the curve of his back, the freckles on his cheeks, or wondering what his lips tasted like. But whatever weird awakening I was having, Adam needed support, not more confusion.

And then I kissed him. Whoops.

And I know it’s fast. I know it’s unexpected. I know my label would be livid if they found out I was dating a guy. But I also know—deeply and inexplicably—that this could be something real. I just have to convince Adam of the same thing. Beautiful, broken Adam who looks at the world through 14 layers of irony. Adam, who’d rather get an appendectomy than admit that he needs someone. Adam, who still doesn’t know all of my secrets.

So do I convince him to risk everything—on me?

Adam’s Song is Book 1 in the 8 Million Hearts series. While each book can be read on its own, they’ve even more fun to read together. Adam’s Song is a 120,000 word m/m romance full of snark, sweetness, and a healthy serving of steam. Friends-to-lovers and hurt/comfort themes. No cheating, no cliffhangers, and a guaranteed HEA. 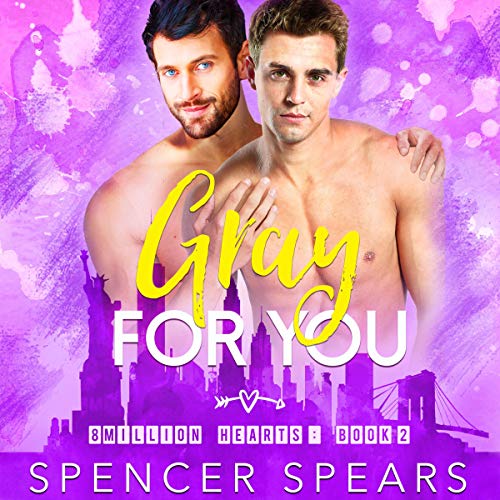 I might be your fantasy. But I’m nobody’s forever…

Gray: I’m not the kind of guy you take home to meet your mother. I’m an ex-adult film star with a GED and a giant co…llection of movie credits I can’t talk about in polite company. I might be good at helping other guys get their happy endings, but I’ve more or less given up on finding one of my own.

Until Tyler Lang walks into my life.

That’s right, my co-star for my final film is Tyler Lang–America’s heartthrob, until he disappeared from the radar last year. Tyler’s got a reputation for being a bad boy, a partier, and apparently straight, but the sweet, vulnerable-looking kid who shows up at auditions is completely different. And now that I’m getting to know him, I can’t help wondering what it is that’s made his eyes so sad–and wishing there were some way I could make it better.

I’m not supposed to get a happy ending. So why the hell won’t my heart listen?

“I’m yours. In whatever way, for however long you want me. Just say the words and you’ll have me forever.”

Tyler: I know what you’ve heard about me. Another spoiled child-actor, all grown up and out of control. I wish I could tell you you’re wrong, but the truth is, I’m a little bit of a mess. Okay, so maybe I’m a giant mess. And now, after getting arrested with an ez-bake oven’s worth of drugs I don’t even remember buying, I’m washed-up at the grand old age of 21.

After a year of rehab and community service, all I want is to work again. So when my agent sends me a new script, maybe I don’t read the fine print as carefully as I should. Which is how I end up auditioning for an adult film. A high-brow, literary adult film. But still. There’s no way I can go through with this. After all, I’m so deep in the closet I’m not sure I’ll ever find my way out. And I wouldn’t do this movie–except for one thing: Gray Evans.

Gray For You is Book 2 in the 8 Million Hearts series. While each book can be read on its own, they’re even more fun to read together. Gray For You is a 150,000 word m/m romance full of snark, sweetness, and a healthy serving of steam. Movie star romance and hurt/comfort themes. No cheating, no cliffhangers, and a guaranteed HEA.

Wow, what a roller-coaster!

This is such an in-depth, emotive and passionate story. I loved Gray from book one and wanted to know more about him. He’s such a dynamic and lovable character, I fell hard! He’s kind, caring, sweet and funny. I’ll admit to quite a few “spit-takes” from the unexpected moments of humor Spencer has injected into this story.

Tyler was just fantastic! A little broken and bruised but so strong and compassionate. I feel like these two will stay with me for a while. They’re just perfect together and while a lot of the story has them not admitting their feelings, I’m so glad they finally got there in the end!

I’m loving this series, these wonderful, lovable and somewhat broken men and can’t wait for more!!!

More from the series can be found HERE

Secrets & Lies, an all new steamy and forbidden MM romance from USA Today bestselling authors @ellafrank1 and @brookeblaine1 is now available!⁠
#QOTD What was the last book that made you cry or broke your heart?⁠
#How was your weekend?⁠
#QOTD What are your weekend plans? What are you reading?⁠
#QOTD Do you read festive novels around this time of year?⁠
Better late than never! My @rainbowcratebookbox October box came the day before the challenge started and I was so excited to FINALLY be able to create, take and post each day for the #rcoct2021 challenge....and then, of course, work went crazy and I'm finally out the other side of it and the challenge is basically over 😭😱 but I had the photos mostly ready to go (please bare with me and my lack of editing) so I thought why not just post anyway! So here are all my October #rainbowcrate challenge photos and unboxing 😜
Loading Comments...
%d bloggers like this: