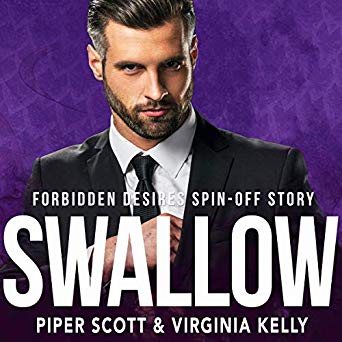 Grimbold Drake, influential patriarch of the Drake family, revels in his solitary life of order—a life which is thrown into chaos when his son pays him an unexpected visit, bringing with him a broken but gorgeous young man more than a millennium Grimbold’s junior. A man Grimbold instantly finds himself yearning to fix, to protect, and to claim.

Meek, subservient, and eager to please, Wally Brand doesn’t doubt the tales he’s been told of the cruel and deceitful Amethyst clan, so when he’s forcibly taken from his home and entrusted to Grimbold Drake—the most powerful Amethyst dragon of all—he knows he won’t be long for this world. Only there’s a gleam in Grimbold’s eyes when he looks Wally’s way and a tenderness to his touch that Wally can’t understand.

All he knows is one thing: whether Grimbold means him harm or not, if he can be good to his dragon captor, maybe, just maybe, he’ll get out of this mess alive.

Swallow is a 30,000 word steamy omegaverse mpreg-ish romance set following the events of the Forbidden Desires series. It contains a broken young man who badly needs love, a curmudgeonly dragon with a heart of gold, new nicknames, familiar faces, and the sweetest dog known to dragonkind. For maximum enjoyment, Swallow is best read as a companion piece to the Forbidden Desires series.

I can’t get enough of this world, these dragons and Michael’s voices!! Such an amazing performance and that’s what Michael has done: performed, perfectly!

I love Grimbold and loved getting a look into what makes the Drake patriarch tick and his poor sweet boy Wally or Walter was just adorable. I loved the dynamics between these two and of course all the cameos from the rest of the Drakes.

I felt for Wally and his tortured past and loved how Grimbald handled him and became all he needed. It was funny to see the big strong, somewhat stoic, Drake melt under Wally’s innocence and affections.

I also loved all the Buffy references!! Such an enchanting world. I can’t wait for more, in any form – gimme!!! 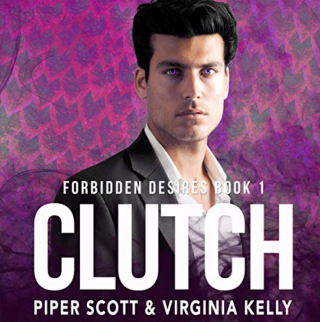 Bookish, snarky, and fiercely independent Nate Boudreaux leads a solitary life. Between teaching classes at the university and working toward his PhD, he doesn’t need a partner to occupy his time, and he certainly doesn’t need a man like Alistair Drake complicating his future.

Alistair Drake, black sheep of the tremendously wealthy Drake family, is more interested in adding another notch to his bedpost than another zero to his bank account. When a Grindr message brings him to Nate’s doorstep, then straight to his bed, he has no reason to believe that what they share will be more than a simple hookup, until, three months later, a tug on his soul informs him otherwise.

For the Drake family has a secret—one that will force Nate and Alistair together as much as it will demand that they be torn apart. One that Alistair and his brothers have carried all their lives… and one that Alistair and Nate’s future children will carry, too.

Bound to each other by the three precious impossibilities, Nate and Alistair have no choice—no matter the consequence, they will fight for their forbidden clutch.

Clutch is a 64,000 word steamy omegaverse mpreg-ish romance that will leave you in stitches. It contains a Grindr hook-up gone very wrong (or very right); giant magical lizards; a pig named Olive; a wank throne; and a HEA, right down to the white picket fence.

Check out my review for Book 1, HERE

Adorably naive and shockingly brilliant Harrison Lessardi only needs two things in life: his pet iguana, Steve, and his undying love of science. That is until he witnesses his best friend lay eggs, and a third must-have strolls into his apartment – the sardonic and mischievous Everard Drake.

Everard Drake, celebrated doctor of the tremendously wealthy Drake family, has one goal in mind when he arrives at the scene of his youngest brother’s latest disaster: incinerate Harrison Lessardi. Unfortunately for Everard, the moment he spots Harry, incineration becomes an impossibility – he must have the gorgeous beta as his own, even if it means holding him captive on his estate.

But something else lurks behind Everard’s interest in Harry – something that tugs at Everard’s soul in impossible ways, and that will send Everard and Harry down a rabbit hole of discovery that will change the world as they know it.

An alpha and a beta can’t share a bond.

Bond is a 78,000 word steamy omegaverse mpreg-ish romance that will leave you in stitches. It contains an unexpectedly consensual kidnapping, giant magical lizards, an iguana with a full wardrobe named Steve, never-ending nicknames, and a HEA that may, or may not involve mosquito nets. For maximum enjoyment, Bond is best heard following the events of Clutch.

Check out my review for Book 2, HERE

Spitfire disgrace Matthieu Boudreaux has one wish: to age out of the Pedigree he despises, then destroy it. With one year left before he achieves the first step of his goal, Matthieu finally has some hope for an independent future. That is, until a surly Amethyst dragon by the name of Geoffrey Drake and his entourage show up at Matthieu’s cloister and inform him he’s been selected to be part of an “experiment”.

Geoffrey Drake, proud and stuffy legal counsel for the Amethyst clan, has been charged with ruining his own life. His mission? Deliver a potential mate to the son of the Amethyst clan’s most despised enemy – and the man he’s loved in secret for the last hundred years – Topaz dragon Ian Brand. Refusal is impossible. Dragons don’t consort with dragons, and should Geoffrey decline, he risks exposing them both.

Ian Brand, charming black sheep of the Topaz clan, is trapped between his forbidden love for an Amethyst dragon centuries his senior and his duty to his family. Chosen by his unhinged father to be the Topaz candidate for the mating experiment, Ian is faced with a terrible choice: run away with the man he loves and face the deadly consequences or accept his fate with a broken heart.

But dragon magic – as Matthieu, Geoffrey, and Ian soon discover – works in mysterious ways. When an unforeseeable circumstance draws them all together and puts their futures at risk, they have no choice but to set their differences aside and work together to prove a new, startling truth…

What the dragon world knows about mates has been wrong all along, and it will be up to the three of them to prove it.

Please note: Mate is a steamy omegaverse romance involving male pregnancy that will leave you in stitches. It contains an experiment gone awry, five eccentric peacocks, an unusually large number of whelps, an ancient Viking Daddy dragon, and science! For maximum enjoyment, Mate is best listened to following the events of Clutch and Bond.

Check out my review for Book 3, HERE