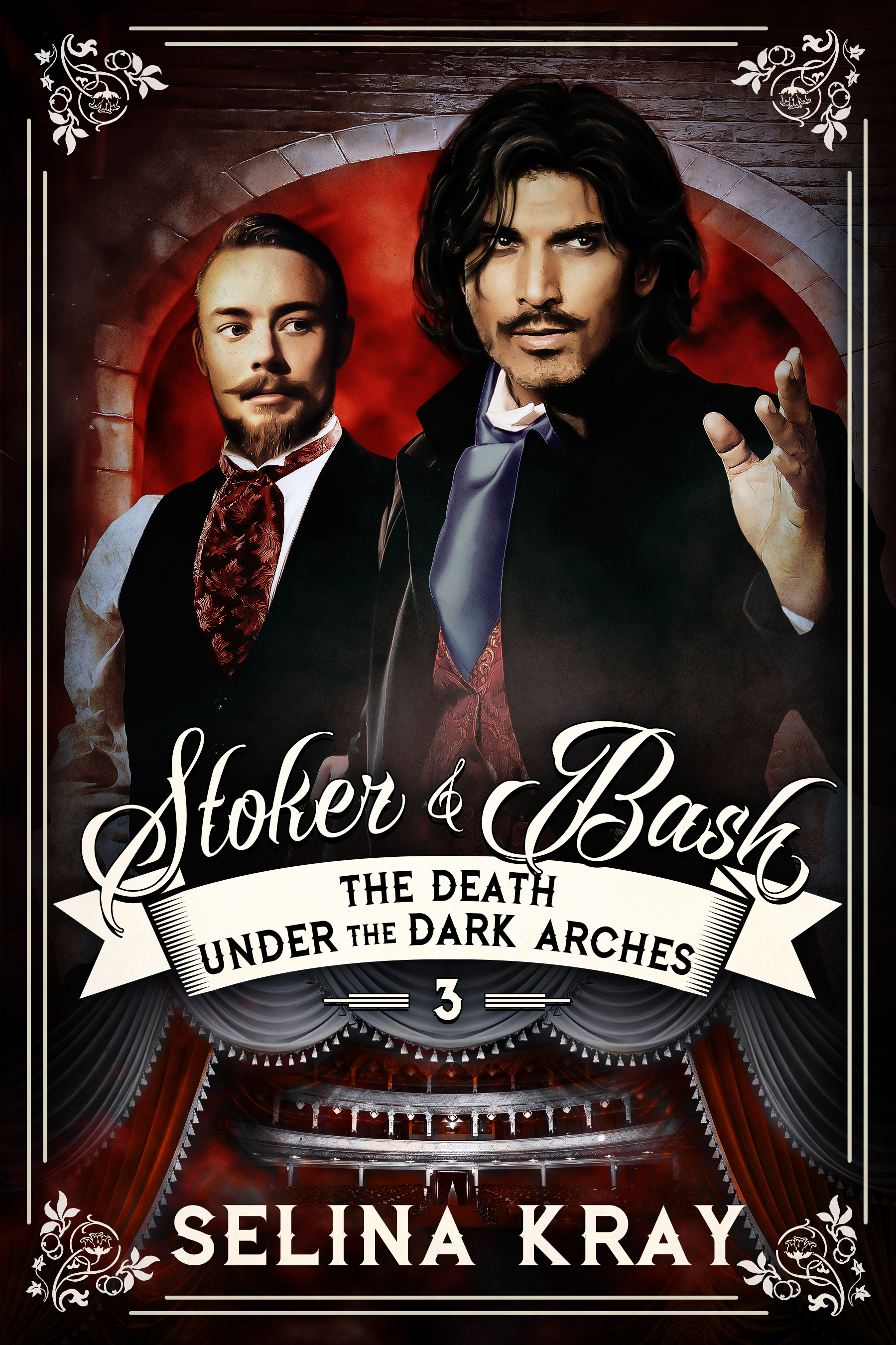 When a phantom presence lures Hieronymus Bash into a deadly game, threatening to kill one of the players at his beloved Gaiety Theater each day until famed actor Horace Beastly returns to the stage, London’s premier consulting detective is on the case. The trouble? Horace Beastly is Hiero’s alter ego and the true object of this murderous obsession. When the current star of the show is struck down, Hiero has no choice but to risk everything by stealing back the spotlight.

After a golden summer together, DI Tim Stoker would do everything in his power to protect the man he loves from this fanatic and the predatory press. But a specter from his own past proves an unexpected, and perhaps fatal, distraction.

Scheming prima donnas, grudge-fuelled critics, and an axe-wielding theater ghost are all out for blood. Will Hiero and Tim unmask this menace before the final curtain call, or are they past the point of no return? 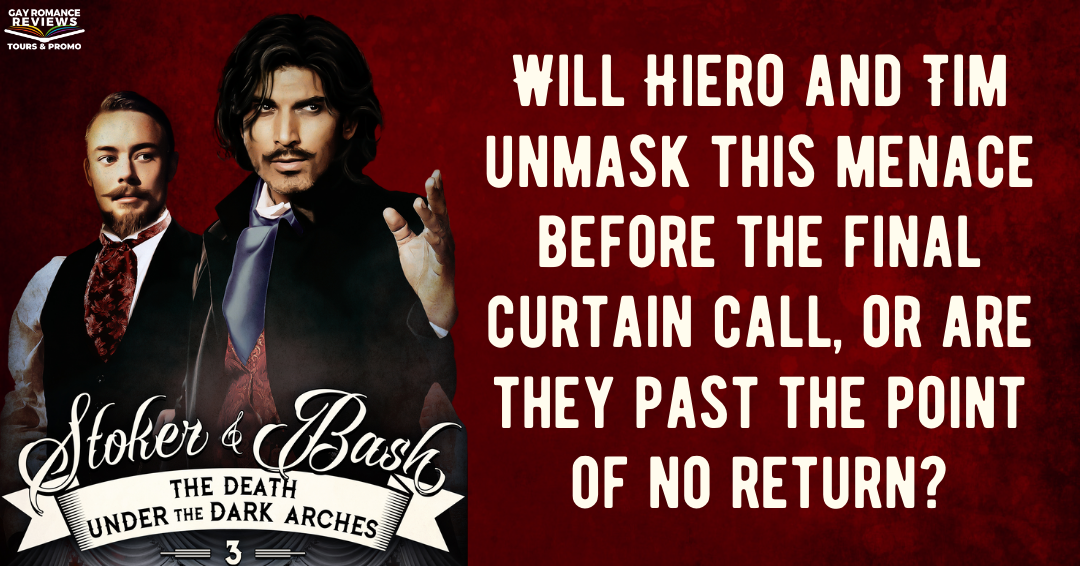 The man who entered might not have been a king, but no noble in Hiero’s acquaintance possessed half his presence or suavity. Hiero immediately recognized a creature of like habits: his manners meticulous, his grooming soigné, his dress haute couture, his bearing leonine. His silver mane had been sculpted into a pompadour that would have turned Napoleon green. The force of his magnetism bulked up his withy frame and gained him a foot in height. Hiero nearly swooned over the blade-sharp edges of his sideburns and the curlicued tips of his moustache. Before him stood a one-man shrine to the Byronic ideal. Hiero despised him on principle. He vowed that this man, this titan of fashion and class, would be kept far, far away from his Kip. “Please forgive my sudden arrival,” the Vicomte said. “Events have conspired such that I had no choice but to seek out your counsel and, I hope, your services.” “It is my honor to receive you, monsieur.” Hiero gestured toward a pair of wingback chairs before the hearth. “Please.” The Vicomte inhaled a deep breath. “Are you an amateur de théâtre, Monsieur Bash?” “I enjoy the occasional sortie, yes. The same as any man of culture.” “For me it has always been a grand passion. It began when I, like most young men, played escort to my mother. From there a fire took hold, and I have burned ever since. This led me to purchase the original Théâtre de la Gaîté—” “Ah! On the Boulevard du Crime.” Hiero smiled. “What a pity they demolished it.” “A tragedy of the highest order. And one from which we are still recovering.” “I believe you were among the few to move house?” “Oui, to rue Papin. But we struggled to recapture the magic. And so, two years ago, the cochons I invested with voted to turn managerial duties over to Monsieur Offenbach.” Hiero fought not to let his feathers ruffle on the Vicomte’s behalf. “A similar case to the management shift at our own Gaiety.” “And with this you have divined the very event that brought me across the Channel. The current owner of The Gaiety, Monsieur Gerry Tumnus, hastily assembled a skeleton troupe. Through an acquaintance I discovered that he had a theater without a company, and since I had a company without a theater, a deal was struck. The grand opening of our first double bill, a Don Juan burlesque and the melodrama Abelard and Heloise, was to occur this very evening.” “How delightful,” Hiero said. “But I’m not clear on what role you mean for me to play?” “For a month we have been settling into our new home. The troubles began almost at once. A mislaid prop. A ruined backdrop. One of our crew tripped on a suddenly wet floor and cracked his head. Several rehearsals delayed because furniture was glued to the storage room walls. Nuisances, at first. A period of adjustment to a new stage, I thought. Or perhaps the petty revenge of the few from the original company who had stayed on.” “Or someone who does not care for foreigners.” “Précisément.” Croÿ-Roeulx sighed. “Childish, but not unforeseeable. But then the rumors started among my own actors. A shadow, they claimed, pursuing them through the backstage. Strange gifts. The sensation of being watched, even when they were alone in their dressing rooms.” A slithery sense of dread coiled around Hiero’s spine. “I thought it nonsense, but the incidents kept piling up. Everyone in the company was buzzing, distracted, missing cues, dropping lines. And then today…” Hiero felt his stomach drop. “Today?” “A murder. Our leading man.” 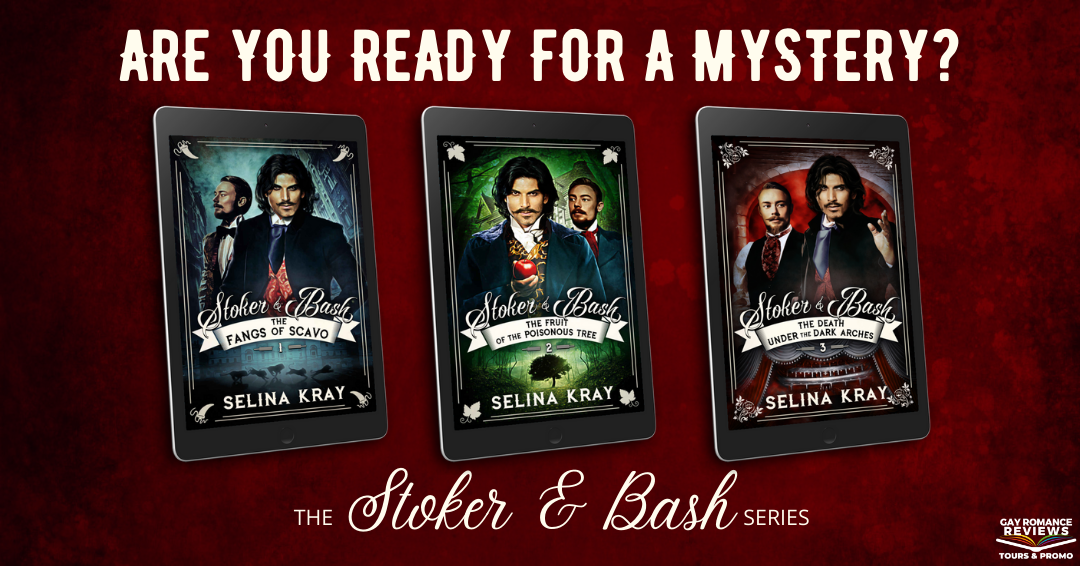 Selina Kray is the nom de plume of an author and English editor. Professionally she has covered all the artsy-fartsy bases, having worked in a bookstore, at a cinema, in children’s television, and in television distribution, up to her latest incarnation as a subtitle editor and grammar nerd (though she may have always been a grammar nerd). A self-proclaimed geek and pop culture junkie who sometimes manages to pry herself away from the review sites and gossip blogs to write fiction of her own, she is a voracious consumer of art with both a capital and lowercase A. Selina’s aim is to write genre-spanning romances with intricate plots, complex characters, and lots of heart. Whether she has achieved this goal is for you, gentle readers, to decide. At present she is hard at work on future novels at home in Montreal, Quebec, with her wee corgi serving as both foot warmer and in-house critic.

If you’re interested in receiving Selina’s newsletter and being the first to know when new books are released, plus getting sneak peeks at upcoming novels, please sign up at her website: www.selinakray.net