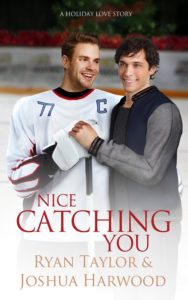 What happens when the No. 1 college hockey star in the country falls in love—with a man?
Nick Johnson, a top prospect for a pro hockey team, has a secret: he’s gay. Tired of living in the
closet for the sport he loves, he sees no way out.

Jacob Meyer’s string of bad boyfriends left him cynical about love. Instead, he focuses on his
studies as a third-year law student. With a new job waiting for him, he’s eager to graduate and
move on.

On a school-sponsored trip, Nick and Jacob meet in a most unexpected way. When Nick tells
Jacob his secret, they decide to hang out, just as friends. But their attraction is too strong to
ignore, and they soon begin dating.

Since Nick is a big man on campus, it doesn’t take long for people to notice his attachment to
Jacob. All hell breaks loose when the relationship gets out. As the national media descends,
university officials try to figure out how to solve their “problem.” Their efforts divide Nick’s
team, inflame fans, and put Nick and Jacob’s futures in jeopardy. Will the men be able to
survive a plot to destroy them without derailing both their careers?

Nice Catching You is an out-for-you romance featuring a lot of love, exciting hockey, and a
beautiful holiday. There’s also plenty of steam and a very happy ending.

I haven’t been on many buses, but I was starting to think I might die on this one. The snow
began falling before we left Whiteface Mountain early in the afternoon, not unusual for one of
the top ski resorts in the Northeast. We were due in Syracuse before six, and I hoped the weather
didn’t delay us much. The last week of classes would start the next day, and I had work to do.
The snow was coming down hard, and by the time we reached I-87, I could see very little
out the window. Many of the cars had pulled over to the side, and others were creeping along
with their hazards flashing. Our bus joined the traffic and immediately began slipping all over
the road.

With fifty-odd college students on the trip, there had been a lot of noise when we left the
resort, but nerves had soon taken over, and people were mostly quiet now. I sat alone, three rows
from the back of the bus, trying to read a case for Federal Courts. With only one more semester
of law school to go, I needed to do well. A big firm in Boston offered me a job right before
Thanksgiving, contingent on my maintaining a 3.8 GPA. Pulling a C in Fed Courts would bring
me slightly under the requirement. Although I had high hopes for a job in DC, I couldn’t risk
losing the Boston offer.

Between the bus sliding in the snow and the constant chatter from the guys in the seat
behind me, I couldn’t concentrate at all. They were hockey players, and they kept up a
conversation about the game, other players, cars, and whatever else dumb undergrad jocks talk
about. They were the only people behind me except for their friend, who was passed out on a
seat in the back.

Whoa! The rear end of the bus lurched violently into the left lane. I tried to grab something
to hold onto, but I was already airborne by the time I dropped the heavy casebook.
Hands grabbed my shoulders but didn’t slow my momentum. Dreading the impact with the
seat across the aisle, I screwed my eyes shut and held my breath. All at once, something stopped
me. Rather, someone stopped me, and that someone had brawny arms and a hard body. He’d
caught me in midair.

“What?” On my back in the man’s arms, facing the top of the bus, I couldn’t see much. I
turned my head, trying to find out who had hold of me.

I craned my neck in the other direction just as he leaned over, and it was—shit!—one of the
hockey guys who’d been sitting behind me. I’d seen him over the weekend with his buddies, at
least one of whom had laughed at me the whole time. Now they’d laugh even harder, and I’d be
known as the skinny little runt who couldn’t even stay in his seat—the twit who had to be
rescued by a real man. 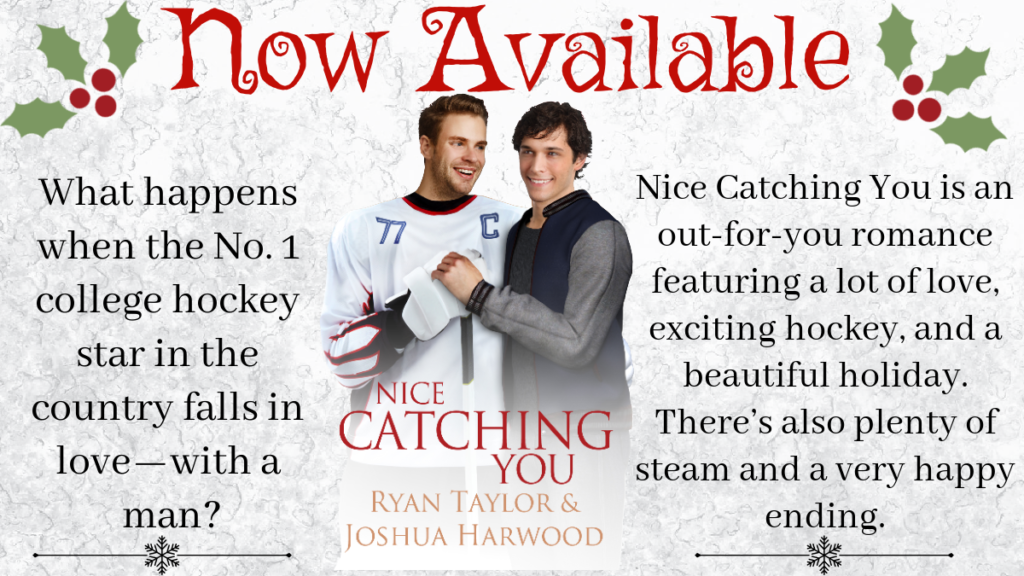 Ryan Taylor and Joshua Harwood met in law school and were married in 2017. They live in a
suburb of Washington, DC, and share their home with a big, cuddly German shepherd. Ryan and
Josh enjoy travel, friends, and advocating for causes dear to their hearts. Ryan also loves to
swim, and Josh likes to putter in the garden whenever he can. The romance they were so lucky to
find with each other inspires their stories about love between out and proud men.

Hi Gabby! It's Katie again and I've loved being a rep for you this term that I'd love to do it again!!! So here's my #NTCRepSearch10 or #NTCInfluencer10 entry!⁠
I love #Queer Book Boxes and @PrideBookCrate is one of my favourites!!⁠
Do you have a #BookAddiction too?⁠
#QOTD Do you enjoy sweet romances? If so, this is the one for you!⁠
#QOTD What are your weekend plans?⁠
#RepPost for @nerdteacreations ⁠
Loading Comments...
%d bloggers like this: