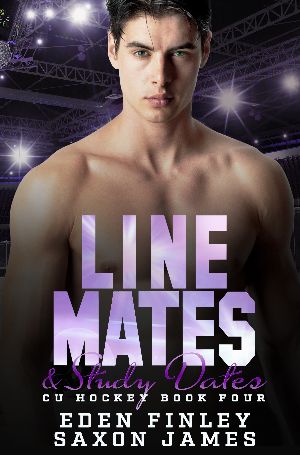 After a tragic accident that took our parents’ lives, it’s up to me and my big brother to take care of our five younger siblings.

In between burning their meals and keeping them from killing each other, I’m supposed to get a college degree. It’s hard when I don’t have time to breathe let alone study, and if I don’t get my grades up, I’m in danger of losing the one thing that makes me happy: my spot on the hockey team.

Which is why when the new equipment manager offers to tutor me, I really can’t afford to say no. Even though I should.

As this year’s equipment manager for Dad’s hockey team, I’m expected to deal with sweaty jock straps and herding hockey players to their rooms at away games.

The job is easy, but babysitting Asher Dalton is not supposed to be a part of it.

So why, when his brother asks me to keep an eye on him, do I agree?

Why, when he’s struggling in classes, do I offer to help?

And why, when we’re studying, do I suggest a reward system that lands us squarely in bed?

Asher’s trouble, I know he is. But there’s something about him that makes it impossible to stay away. 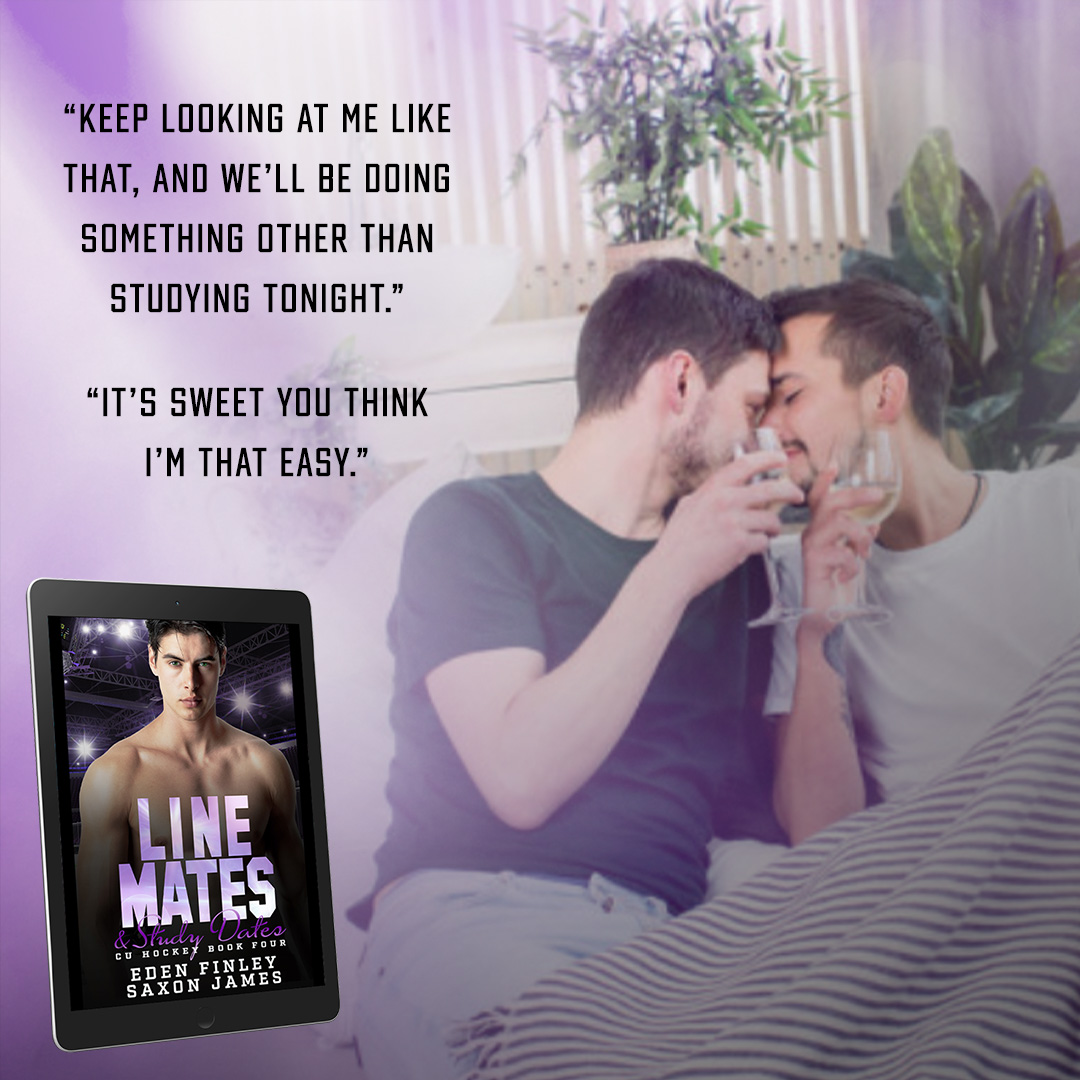 We need some kind of way for him to physically work through each part. Maybe he could draw a picture … or maybe … If he needs a live model, I’m right here.

I pick up the pen beside me, then reach for my shirt and pull it over my head, my skin already coming alive at the thought of what I’m about to suggest.

I’m not built like Asher or any of his teammates. I’m lean but have next to no muscle. Even still, there’s no way for me to feel self-conscious over it when Asher’s eyes drop to my torso, and his nostrils flare as he takes me in.

“I’ve got to say, distracting me probably isn’t the best way to help this sink in.”

I hand over the pen and pull up a diagram. “You’re going to draw it.”

I stand, but Asher remains seated. There’re barely a few inches between our bodies, and his head is level with my chest and abs … or lack thereof. The hum of tension filling the room is almost loud enough to hear. His warm breath on my skin sends goose bumps over my arms.

“Yep.” I steer his hand up to hover over my diaphragm. “Get drawing.”

His touch starts light, hesitant, but the more he drags the pen over my skin, the more he actually concentrates on what he’s doing, and the more confident he becomes.

“Duodenum,” he murmurs as he draws. “Jejunum.”

One of his hands closes over my waist to steady me, and I try not to get lost in the warmth of his touch, the light calluses on his fingers that are bringing my skin alive. With his head tilted down, his eyelashes are fanned over his cheeks, and when his lips bunch with concentration, it draws my attention. They’re so full and pink, and my own lips are tingling at the thought of what his might feel like.

It can’t have escaped his notice that I’m breathing heavier, because he is too. His grip on my waist tightens. He drags the pen across my stomach, and this time, his fingertips lightly trail after it.

I try to hold back a shudder but can’t.

“Appendix.” His husky voice sends vibrations over my skin and has my cock starting to lengthen. I’m past the point of caring if he notices. I can’t drag my gaze away from him.

When Asher reaches my jeans, he drops the pen completely, and I barely hear it hit the ground.

Asher meets my eyes as his fingers lightly inch under the waistband of my briefs. It’s a delicious tease, and I want to encourage him lower, but instead he trails his fingers across my hip and around to my back, pulling me closer so I’m standing in between his legs. We’re not touching, but I can practically feel him everywhere.

I need to touch him. “The best way to learn anatomy is with a hands-on approach.” My body thrums in anticipation. It’s begging, Touch me, more, please.

“I can see that,” he rasps. His green eyes darken as he takes me in. They trail over the pen marks he left, but he still doesn’t make a move.

He’s stronger than I am.

I swallow hard. “There’s another proven learning technique we could cover.”

His lips quirk. “And how does that work?”

“Each time you learn something new, I reward you.”

I lean over and whisper in his ear. “However you want.”

Finally, he breaks, and a crack in his restraint shows. Asher shoots back in his chair and stands. “Pity I’m not your type … right?”

“I’m prepared to make sacrifices in the name of education.” The needy tinge to my words makes Asher smile, but it falls fast.

“You’re fucking with me.” He squeezes his hands closed by his sides and then folds them across his impressively wide chest.

I don’t know how to tell him that I’m really, really not. “Nope. I really am trying to help you learn.” I step closer. “This way could be a good idea.”

“Hooking up is a terrible idea.”

With hockey-like reflexes, Asher’s arm curls around my back and crushes me to him. I let out a little unintentional squeak as he presses his hard cock against my thigh. Damn, he feels good.

“This could be dangerous. You’re Coach’s son.”

He still hesitates, bottom lip caught in his teeth, and I have to admit, he’s proving he does actually have impulse control. He just never uses it.

“I didn’t think it would take this much convincing. I must be losing my touch.”

He lets out a loud breath. “You have no idea how much I want to take you up on this. But … it’s not a good idea. I’m not good for you. I don’t want … feelings to get involved. That’s when things get messy.”

I snort, because the idea of falling for Asher is actually ridiculous. “Guys with the emotional range of a trash can really are hard to resist.”

“What if I promise not to fall in love with you? Then will you let me suck your dick?”

Apparently, those are the magic words. All hesitance leaves him as his mouth crashes against mine. 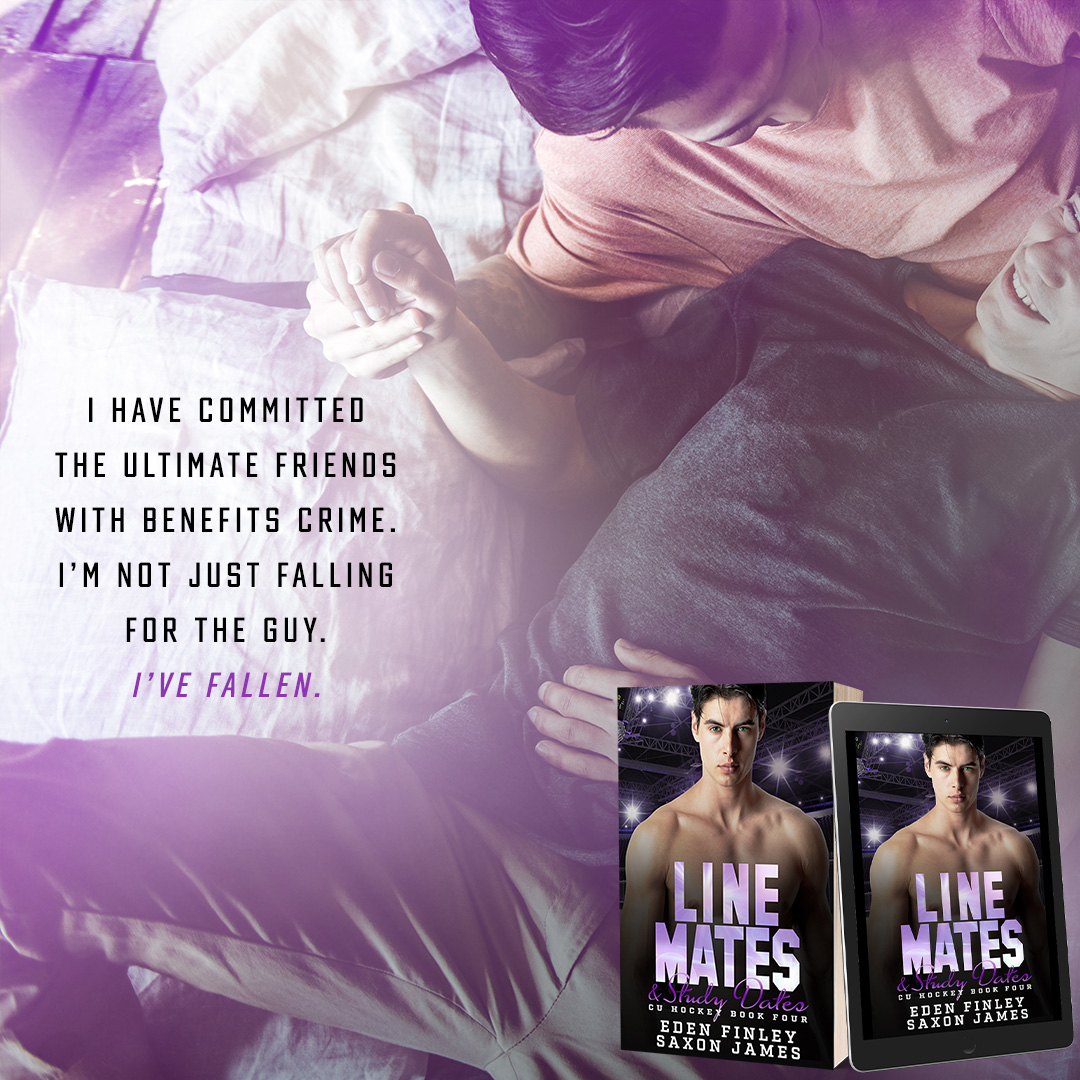 OTHER TITLES WITHIN THIS SERIES 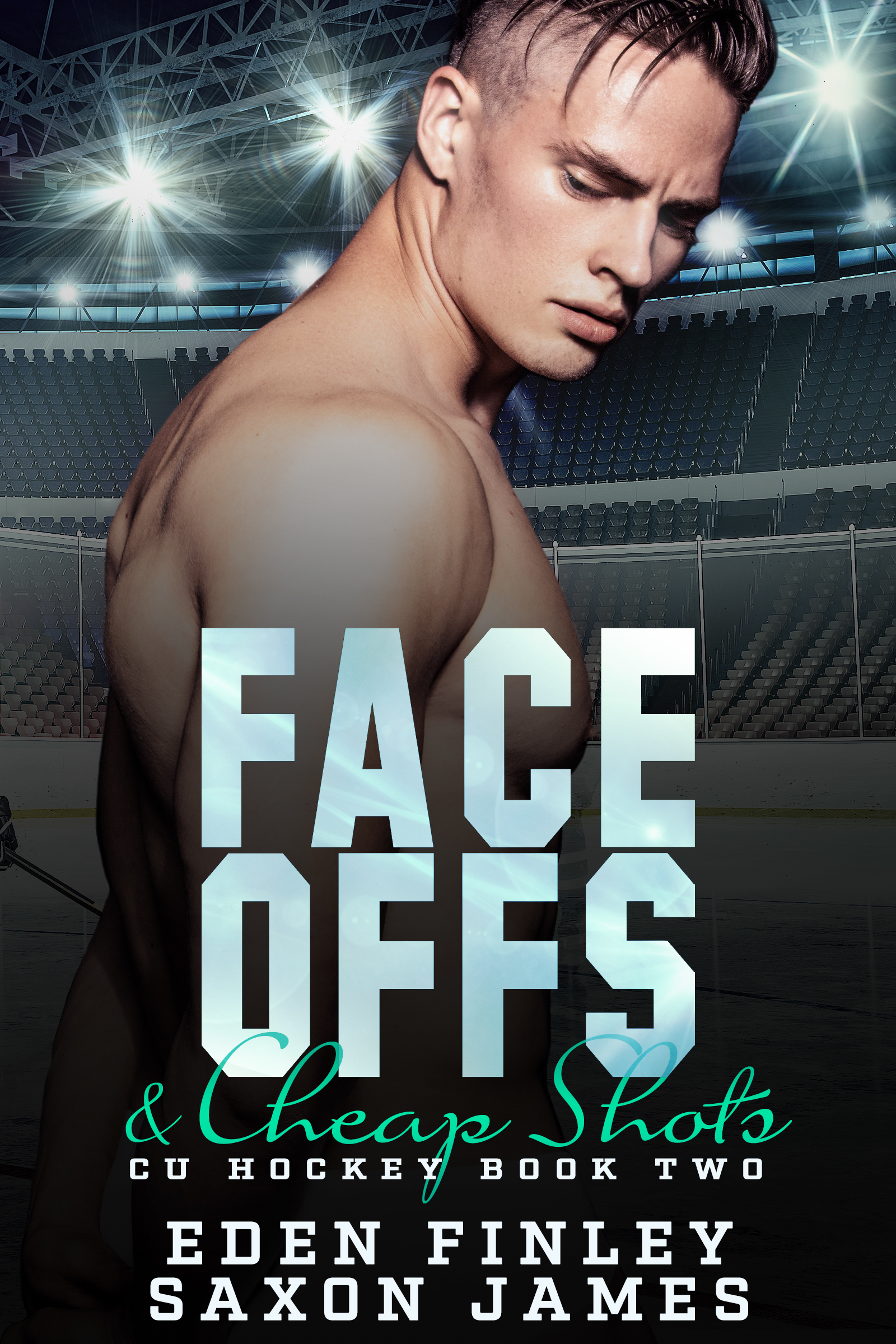 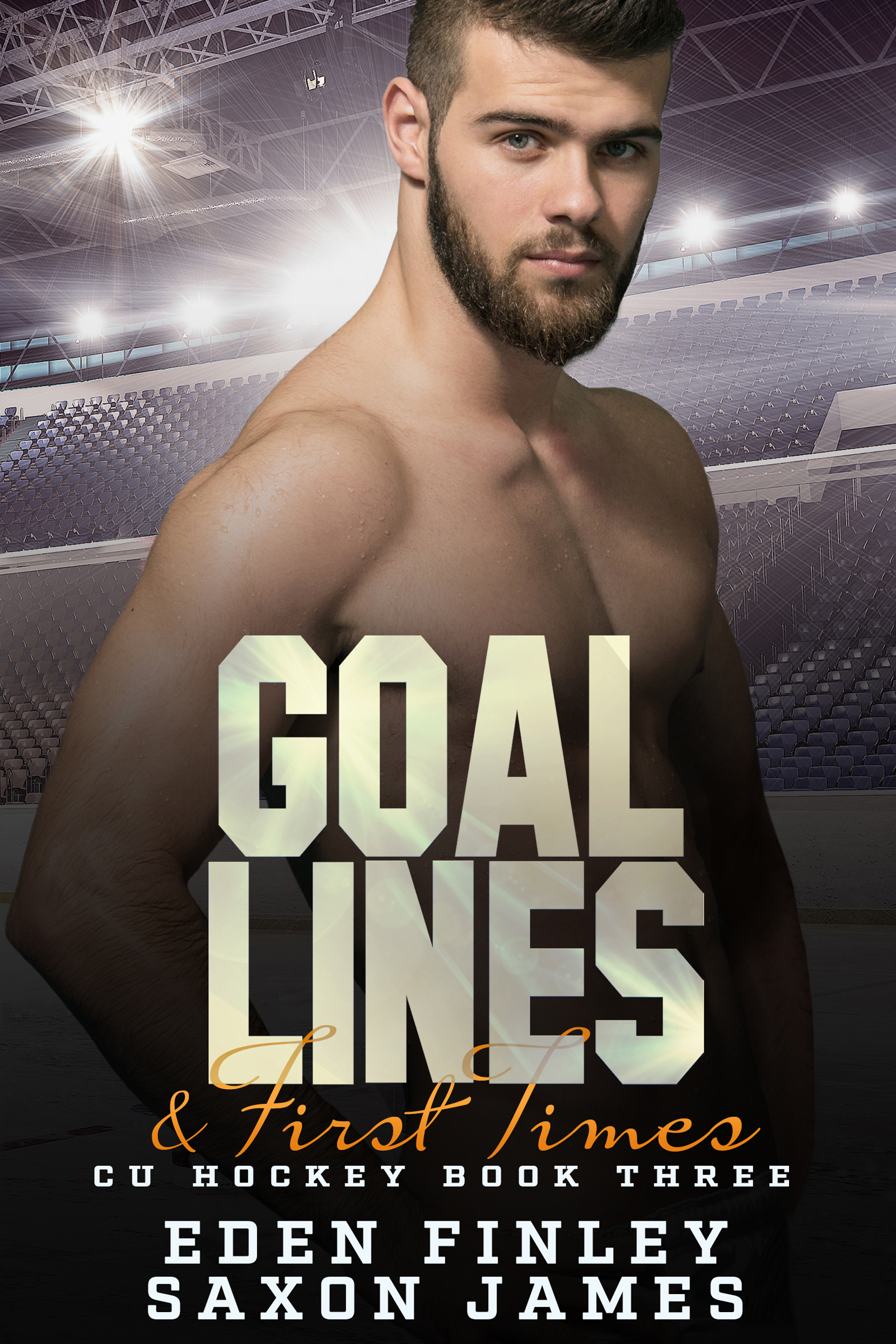 With a short attention span that rivals her son’s, she writes multiple different pairings: MM, MMF, and MF.

While not writing, SM is a readaholic and netflix addict who regularly lives on a sustainable diet of chocolate and coffee.