Ren finds more to life in the city that never sleeps than working at his uncle’s Shinto temple. And one of those things is trouble. Ren finds himself in hot water with a local motorcycle club, and they’re out for blood. When it seems like it can’t get any worse, a cry for help echoes inside Ren’s mind. At the other end of the call, Ren finds Devon, a powerful telepath known as an Esper. He just so happens to be under attack by the same motorcycle club that wants Ren dead. Despite the risk, Ren saves the day.

Though their connection was strong, Ren finds that there is more to Devon than meets the eye. Now, the fire that burns inside of him is yearning for release. Ren and Devon realize they have only each other with dark magic, a curse, and a murderous motorcycle club on their heels. As time ticks away, both men need to use their powers in ways they never thought they would. If not, they risk losing the connection—and love—that has grown between them.

The air chilled my skin as I raced my 1941 Indian Motorcycle through Times Square without a thought to other traffic or even law enforcement. Breaking the law exhilarated me, even in such a small way. Freedom. It felt like there were no constraints on me as I drove through my hometown with reckless abandon. A car skidded to a stop, its horn blaring as the driver yelled a stream of profanities in my direction. I smiled as I rode past. I lacked any fucks to give at the moment. The traffic could wait for me.

Living in a city that never sleeps, there was still traffic at night. Nowhere near as much as during the day, but enough that I should pay more attention. Becoming roadkill didn’t appeal to me, but the thrill of the ride was like a drug. I enjoyed the cool air on my face and the way the city blurred past me in all its neon
rush. This is life.

Sitting up, I gave my back as good of a stretch as possible and let the city fly past me. Everything came as a blur in my vision, and my heart raced with excitement. If only I could ride forever and never have to look back. Ahead of me, the traffic light turned yellow, causing me to slow, but not too much. I was far
from wanting to stop.

As I approached the intersection, neon lights shone with life on billboards. Signs for decadent entertainment advertised triple x movies. Large screens came alive with bold ads for the latest soda
and Hollywood film. All promised the same thing, an escape from the drudgery of time.

The red light popped up ahead of me, and I skidded to a stop that caused a few hookers to raise an eyebrow. Shit, this was going to take a while. I had time to spare since I wasn’t going any-where, but I was impatient, and the traffic lights irritated me. I moved my riding goggles up and around my helmet. The city lived and breathed with its skyscrapers, people, and lights that lit up the night sky. I took it all in.

The people, the bright lights, the traffic, and even the smell of rubber, exhaust, and the city itself filled my senses with pleasure. I loved this town. You could get anything here. If not for free, then for a bit of cash or even love. Not that I would pay for that sort of thing. Money can’t buy the real thing anyway, and what you could rent for a few hours involved a trip to the free clinic for a shot of penicillin.

I was content to wait till my heart led me to the one it needed. No matter who it was, I knew my heart would recognize him. Yeah, I’m gay, but that’s the least of my secrets. If anybody asked, I’d be honest. I didn’t wear my sexuality on my sleeve. Being Japanese-American made it challenging to be out and proud.

My culture is conservative. My parents were dealing with it well. At least, my mom was, but my sexuality was far from their biggest concern. Like I said, that’s the least of my secrets. Early in life, I had a way of making things catch on fire. My mother, in all her superstitious beliefs, thought our ancestors had cursed me. It took a trusted Shinto priest to calm her nerves and let her know what her son had was a gift from our ancestors. It didn’t stop her worries, since normal childhood tantrums never lead to pyrotechnics. My father forced me to serve at the shrine on top of an apartment complex to help control my fire-starting abilities. He hoped it might “cure me of my gayness,” as my father put it.

Working in the shrine didn’t help cure my sexuality, but it taught me discipline and control. I learned a lot of great karate that I wouldn’t have if I had a normal upbringing. The control eased my parents’ minds, but deep down, my power still scared them. With time comes change, I know, but no one else in the family knew about my pyrokinesis until then. That didn’t bother me so much since I never talked to them. Such is life and family tradition. Even a tree bends to the wind.

Speaking of the wind, the light on the other avenue turned yellow as the traffic light danced in the breeze with the others. I set my goggles back over my eyes. It was time to ride. I took off as soon as the light turned green. There was no time to waste. This was the one time of day I had to myself. I spent my days adulting, throwing fish at the market in the mornings, followed by strict katas at the shrine under the watchful eye of my sensei. He oversaw my shrine training with a bamboo stick. The sting reminded me of the mistakes I made. Just the memory of it was enough to make me wince. It wasn’t horrible or even abuse, and I rarely got it anymore. I was a man now, and usually, my uncle put me to work doing menial chores instead of giving me a crack of the bamboo. I didn’t mind the chores.

Sensei was getting old and didn’t get around as much as he used to. He was an outstanding teacher and had my full respect and love. I loved him like a father. Unlike the memory of the whip, the thought of my sensei made me smile. He, along with my father, made me into the man I am today. The instruction from both of them kept me out of trouble—for which I will be forever grateful. The government could’ve targeted my pyrokinesis, or it could have gotten me killed. I would not allow that; we were the keepers of so many secrets. There were times the pressure made me think my skull would explode.

The power that burned inside me needed an occasional release. Even setting a piece of paper on fire helped ease the pressure. Sometimes it needed more, but those instances became less and less as I gained more control. All those times of meditation at my uncle’s temple helped me a lot. Now, calling a small flame in the palm of my hand or lighting a candle with a thought was easy. Burning down a building was also an option, but not one I considered. Help me. 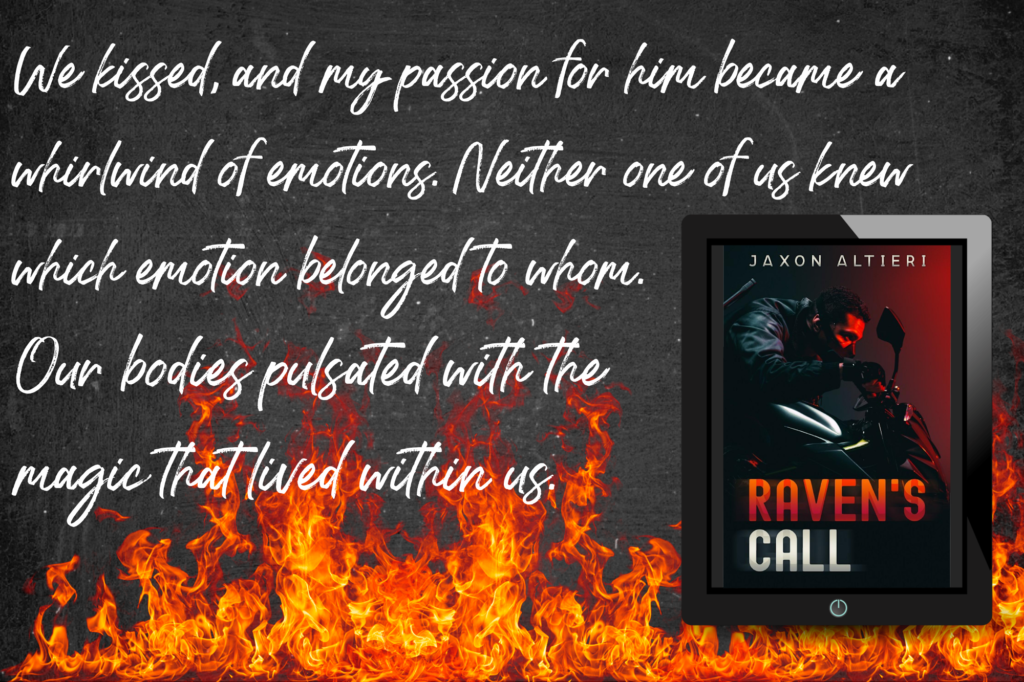 As a resident of Colorado with a history of writing weird shit and with a degree in business and IT, Jax hopes to enjoy his writing career to its full extent. When he’s not writing, he’s playing with his dogs, listening to metal, or trying to get in his partner’s pants. Oh, he also takes Krav Maga and loves Sci-Fi stuff.