Release Blitz, Excerpt & Giveaway: Returning to You By Gwen Tolios

Title: Returning to You

Monica’s relationship with her father is falling apart, made more obvious when her return to Madison after years aboard results in him throwing her out of the house. Lisa Carson, her BFF and old college roommate, takes her in. Turns out Lisa has her own issues with her parents – they’re pushing her to date despite her lack of desire. So when Monica joins a Carson family dinner, she lies and says it’s starting a relationship with Lisa that brought her back to America.

Lisa goes along with the rouse – it gets her parents off her back and it’s only until Monica repairs her relation-ship with her father and moves out. What Monica failed to take into account however is that crush she had on Lisa in college? Yeah, that didn’t go away.

Returning to You
Gwen Tolios © 2022
All Rights Reserved

The bustle and urgency of O’Hare Airport calmed Monica’s nerves as she stepped off the plane. Colder-than-wanted air conditioning, people sitting on the floor next to outlets, automated announcements, and large blue signs. After five years of almost constant traveling, bus stations, train stations, and airports were familiar enough to be second homes.

Ay Dios, it’d be nice to not jump around for a bit. From October through December, she’d be home and nestling into her childhood pillows.

She took a deep breath, pushing aside her rising anxiety, and made her way to baggage claim. As much as she knew she had to come, the thought of spending the next three months with her father made Monica bite the inside of her lip. Their past five calls had ended with him yelling at her. For the past year, their relationship had been on edge, and she hated it.

So she came home to fix it.

Waiting for her bags, she logged into the airport Wi-Fi. WhatsApp filled with messages from friends wishing her a safe flight. She typed landed!, then flipped to Instagram. She recorded a short video, complete with an ear-popping yawn, to inform her followers her flight had been screaming baby free.

A soft thunk turned Monica’s attention to the now-appearing luggage. Ten minutes later, she pushed a trolley out the door with one hand and called her father on the other. Eric Ubach picked up on the first ring. “Hey, Globetrotter. Almost there.”

Monica sighed. He’d answered with her childhood nickname. That had to be a good sign, right? “¡Hola, Papi! I’m by the D door.”

“You remember the car?”

Monica rattled off the license plate and Eric laughed. “How you remember things like that, I wish I knew. See you in a bit, mija.”

She hung up and took a deep breath of Chicago air, the cold burning her lungs compared to the Mediterranean warmth she’d left. He hadn’t raised his voice. He sounded happy throughout their entire, though brief, conversation. Coming back had been a good choice. They’d spent too long apart for being each other’s only family.

A red Saturn Astra caught her eye, as did the tall, dirty-blond man cramped behind the wheel. Monica waved to get her father’s attention. Eric waved back and cut to the curb. They went into action—opening doors, throwing in suitcases, exchanging brief hugs—to a soundtrack of horns and traffic guards shouting at cars to move. Within minutes, Monica plopped into the passenger seat, grinning. She held up her hands to the car’s heat vent and rubbed her hands together.

Eric patted her thigh and started driving. “How was the flight?”

Monica filled him in, from her mad dash to the gate to the small rivalry she developed with a username on the in-flight trivia game. The conversation made Monica feel younger. Younger than twenty-seven, or twenty-one, or even eighteen. She slipped back to middle school, safe and warm in the car as her father drove her home from school and asked about her day.

She must have fallen asleep during the two-hour trip to Madison because the next thing she knew her dad was shaking her shoulder in the garage. “Come on, Globetrotter. Up to bed. Gotta sleep off that jet lag.”

Monica groaned. “I want to take a shower first. Get the travel dust off.”

“You remember where the towels are?”

“I used to live here, Papi. I doubt it changed too much.”

They lugged her bags into her bedroom. It looked just like she left it heading off to college: high school posters on the walls, the bookshelf full of Baby-sitters Club books, the nest of pillows and stuffed animals on her bed.

She grabbed her stuff and headed to the bathroom.

Ah, American showers. She’d gotten used to older European showers, showerheads above drains with a small lip made of tile to contain water if she was lucky. Now, she relished standing in a basin and not having to worry about water all over the floor or keeping her elbows in. Monica hummed to herself, lathering her hair, when Eric burst through the door.

“Just getting something,” he said, opening the medicine cabinet.

Before the shampoo dripped into Monica’s eyes, her dad grabbed whatever he needed and left. The door clicked shut.

Ay Dios! Who cared if the glass was frosted? Her dad should never have come in! Fuming, she scurried to the door, locked it, and stepped back under the spray.

Warm from embarrassment and the steam, Monica quickly finished. Before heading to her room, she took a detour to lean over the railing at the top of her stairs. She heard her father in the kitchen, and as much as she wanted to scold him—it’s not like he hadn’t known she was showering—she couldn’t imagine facing him without blushing scarlet.

“In case you need anything else from the bathroom,” she called down the stairs, “I’m out.”

She hoped her indignation was obvious, but the apology she expected never came. She debated demanding one, but that seemed petty. Plus, who wanted to draw out mutual embarrassment?

Monica crawled into bed. Lying under the sheets, she browsed Instagram and responded to comments. Keeping an active profile kept her followers engaged, which in return increased the likelihood of brands wanting to pay her for a bit of publicity. She never imagined using her business degree more for her side hustle than her day job as customer support for a travel agency, but oh well.

She got a ping from Lisa on WhatsApp.

Lisa: Ah! You’re in America again! How was the flight?

Monica: what’d you do today?

Lisa: Did some work, then had a lunch date.

Lisa: He was cute, but not cute enough.

Monica stared at the screen for a moment, wondering if it was worth the fuss of bringing up her dad’s earlier behavior. Probably not, she decided. It’d been awkward, not something she’d ever expect considering how courteous he’d been when she was a teen, but not malicious. For the majority of the past nine years, Eric had been living alone. He simply had to readjust to sharing the house.

And relearn manners? Monica shook her head. People made mistakes, and there were worse ones than barging into an in-use bathroom. No use going all reality-TV-drama over it.

She texted Lisa good night and slipped her eye mask over her eyes. 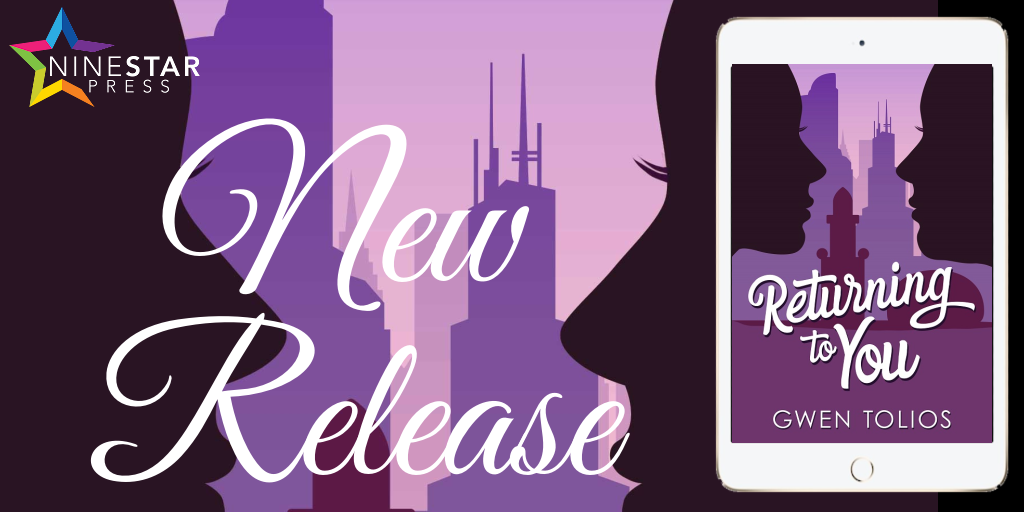 Gwen Tolios is an ace author who after traveling and time abroad settled in Chicago. She lives with a cat who refuses to cuddle and spends the weekends chugging coffee and typing words.