Micah Avery has called Split Rock Ranch home for most of his life—it’s one of the few places he can be totally himself without worry or judgment. The ranch, the horses, and the people are Micah’s future, and he couldn’t be happier. The fact that it’s also home to the ranch manager he’s determined to marry one day is icing on the cake . . . all he needs is for Ryan to notice him.

Ryan Astor came to Split Rock Ranch at a time when he was desperate to start over. It was just supposed to be a stop on the road, but instead he found a home and a family—that family includes Micah, the sweet kid who’s been the ranch mascot since before he was tall enough to see over the stall doors. Ryan’s finally found his place, and he can’t imagine wanting anything to change.

Then little Micah Avery grows up. And Ryan’s suddenly confronted with a whole mess of feelings and desires he never expected. Now he needs to decide if he can give in to what they both want without jeopardizing everything they have.

Something Undeniable is a slow-burn, 37k-word novella with an age gap, mutual pining, and plenty of heat. It’s the first book in the Split Rock Ranch series, but can be read as a stand-alone story. 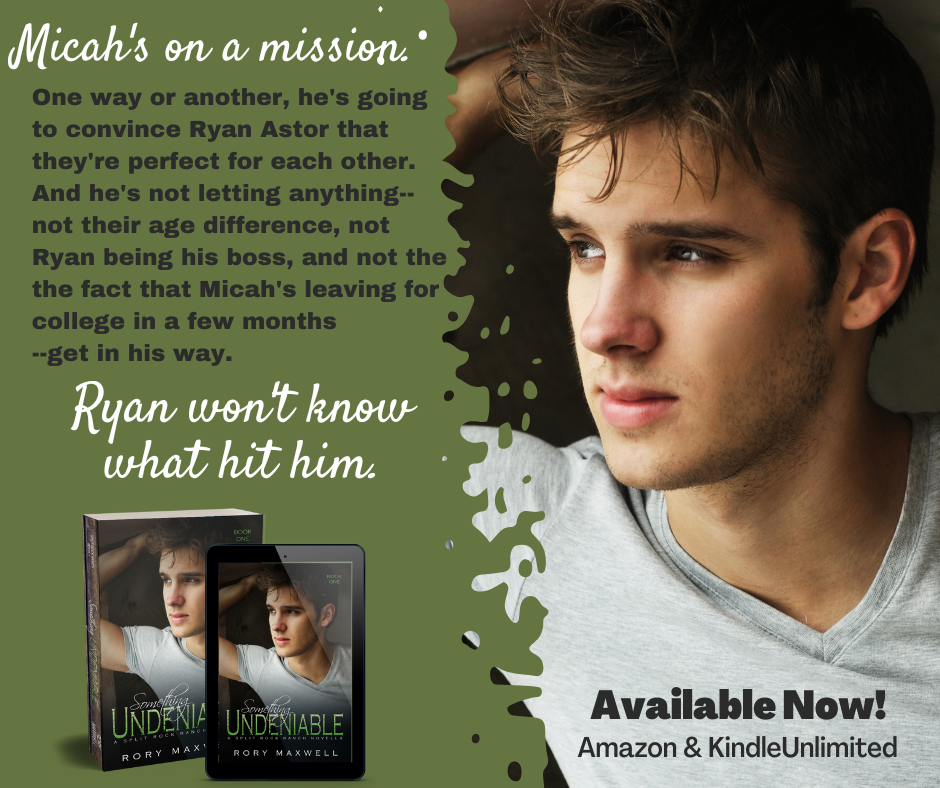 Ryan was a fucking mess.

His original plan to keep his distance seemed impossible. Even thinking about it made him feel like an asshole. It wasn’t Micah’s fault that Ryan was losing his mind. Well, it was completely Micah’s fault, but it wasn’t fair to take it out on the kid. Ryan was fucked in the head and it was getting worse every day.

Micah’s reaction to Ryan’s fingers on his throat was stuck on a loop in Ryan’s memory. The little gasp followed by the racing of Micah’s pulse was simultaneously shocking and the most enticing thing Ryan had ever experienced. He’d wanted nothing more than to draw Micah back into his arms and feel that long, lean body tucked against his own.

Not even the adrenaline-soaked terror of the storm and Micah nearly getting injured had stopped Ryan from being smacked in the face by how perfectly they fit together—the way Micah’s body had molded to his so easily. Knowing Micah was safe hadn’t made Ryan ready to let him go.

And now he was paying for that indulgence. He’d thought cold showers were a thing for hormonal teenagers, but he’d proved himself wrong just this morning after a dream that involved a literal roll in the hay with a very willing Micah. He was half-hard again just remembering it.

He sighed and forced the images away. They weren’t, and would never be, reality. Allowing anything to happen with Micah would only lead to pain and awkwardness in the future. How could it not? Micah was leaving, and as much as Ryan was realizing that he wanted to see if they could be more, he didn’t want to be a mistake that Micah looked back on with regret.

To celebrate the release of Something Undeniable, Rory is giving away a $5 Amazon Gift Card!

Rory Maxwell discovered romance novels on her mom’s bookshelf when she was probably too young to be reading them—the reward for being a nosy kid with great reading comprehension. The magic of a dial-up internet connection led her to the wonderful world of MM fanfiction a few years later and she fell love with the genre. In 2019 she woke up with a plot bunny, opened a word doc, and started trying to figure out how this writing stuff worked.

Rory grew up outside of Washington, DC, moved away, and then came back for reasons she doesn’t fully understand. An artist and writer, she always has too many exciting ideas and not nearly enough free time. One day, she hopes to escape to the mountains and open an LGBTQIA+ friendly bed and breakfast where she can work from home and write as much as she wants. In the meantime, she splits her time between her day job and writing MM romance with endearing characters, lots of feels, plenty of heat, and a dash of kink.