Marisburg Connections: Four couples from Marisburg share a connection that’s stronger than anything the universe — or even a small town — can put in their way.

Out For You (Marisburg Connections 2): The story of Erik’s fears of being out of the closet and the extraordinary lengths to which he’ll go to keep his lover, Trent, in a state where being gay is considered amoral.

Guilt (Marisburg Connections 3): With Mike’s help, Aidan wrestles with his past. Can Mike’s love help him lose the shadow of guilt?

It was early June when Jake emerged from the three-story building that housed the ADA Coordinator’s office. He’d been moving quickly but the moment he opened the door, the world went white. He stumbled to a halt and covered his eyes partially with his left hand. His right tightened on the handle of the white cane he’d only been half paying attention to. It wasn’t that he didn’t need the cane to get around. He’d learned rather quickly that the white cane could save him from many embarrassing or painful situations. But, inside, he barely noticed its whispering across the floor in constant contact with the rugs or tiles. Now, he wished he could just duck back into the safety of the building’s dimmer interior.

But Tyler, his lover, was waiting for him out in the parking lot and Jake really needed Tyler’s comfort. He hadn’t struggled through a bad day, hadn’t done that in a while, but the glare from the sun that turned everything white made him both sad and timid.

He allowed the door to close behind him, listening to its click of finality. Oh, stop thinking like that, he remonstrated himself.

He needed to get to Tyler. So, closing his eyes, he put the cane out in front of him and swept it right to left, checking for obstacles. And, taking his first tentative step forward, he thought, I guess the ophthalmologist was right. Glare was bound to affect me sooner or later.

He wanted so badly to be able to peek and make sure that he was headed in the right direction that he covered his eyes all the way to not allow himself that opportunity. Even assuming he could see something other than white light, he’d give himself a blinder of a headache by trying to use his vision when his eyes were already streaming with tears of strain and overexposure to light.

He heard a door ahead of him somewhere open and close. Then, Tyler said, “Are you okay?” He was still a good distance away but surely he could see Jake’s hand over his eyes. Jake cursed softly, squeezed his eyes even more tightly shut, and dropped his hand. Even through his eyelids, the world was terribly bright but at least he could walk without opening his eyes.

He started to move faster, needing to get to Tyler and the shelter of the truck. He swept his cane from right to left and left to right, trying to feel everything. But he missed something, maybe a crack in the sidewalk, maybe nothing more than an imagined crack, and tripped. He kept hold of his white cane and managed to right himself before Tyler reached him, but both were near things.

“Are you all right?” Tyler asked, touching his arm and then making a sound Jake thought was frustration. “Obviously you’re not. What happened?”

Jake wondered if that frustration was with him. He doubted it. Tyler was the world’s most patient person. He took a breath, needing to confess because he’d end up blurting it out sooner or later. “The glare is killing me. Dr. Metz was right. It finally showed up. The sun…” He shook his head and turned away slightly. “When I’m not looking directly at it, it hurts less.”

Tyler ran his hand up Jake’s arm to his shoulder. Then he leaned close and kissed Jake’s temple, which was thoroughly distracting in a way that made Jake aware of his cock as he hadn’t been all day.

Jake’s orientation and mobility teacher was a busy man. He had most of their part of Pennsylvania to look after. “If he’s ever free.”

“I’ll take you to Philly once a week if that’s what it takes.”

“I love you,” Jake blurted. It wasn’t a new concept, but he felt completely overwhelmed with gratitude and desire.

When Tyler kissed him full on the mouth, making him weak at the knees, he knew Tyler’s answer, in his own way, was, “I love you too.” 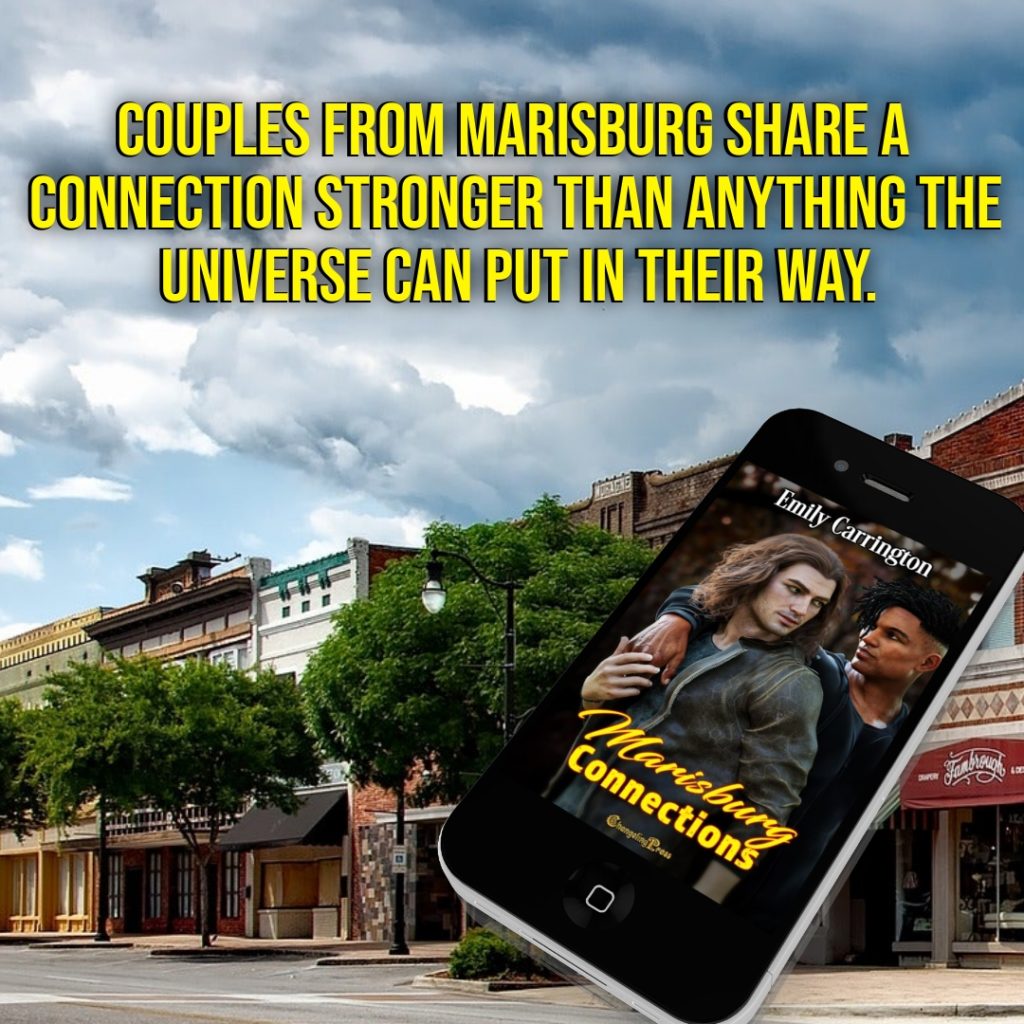 Emily Carrington is a multipublished author of male/male and transgender erotica. Seeking a world made of equality, she created SearchLight to live out her dreams. But even SearchLight has its problems, and Emily is looking forward to working all of these out with a host of characters from dragons and genies to psychic vampires.

Fantasy creatures not your thing? Emily has also created a contemporary romance world, called Sticks and Stones, where she explores being “different” in a small town.